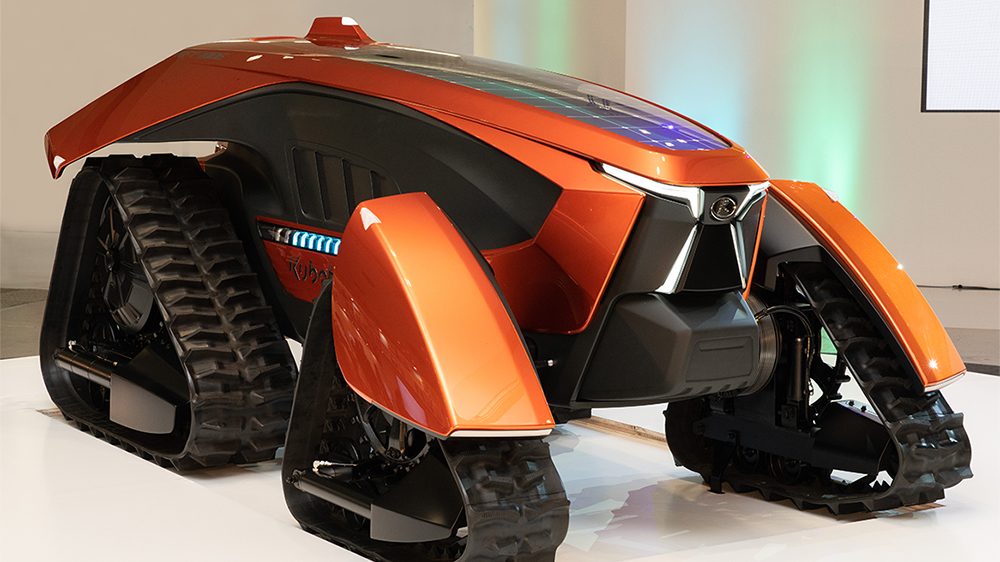 The robot overlords have come to the farm.

Earlier this month, Japanese tractor and heavy equipment manufacturer Kubota provided the world with a preview of what the future of farming might look like. The sneak peek came via the company’s Dream Tractor concept, a piece of autonomous farming equipment that is at once both terrifying and undeniably cool.

The wild prototype, which also goes by the name X Tractor, was unveiled at a January 15 event in Kyoto celebrating the brand’s 130th anniversary, according to a press release from the company. Equipped with advanced artificial intelligence technology, the concept is a fully autonomous and electric smart tractor that represents what Kubota envisions as the future of farming in Japan.

But any conversation about the Dream Tractor has to start with its bonkers design. The futuristic prototype is one sinister-looking tractor. Like something out of a dystopian sci-fi flick, the hulking metallic orange-and-black vehicle travels around on four tread-covered wheels that the company says can travel over nearly any kind of terrain, including wet rice paddies.

According to Kubota, farmers in Japan are retiring at a rapid pace, so it’s only natural, the company believes, for the industry to move towards autonomy. The Dream Tractor’s AI tech will take into account factors like time and weather when assessing tasks in order to complete them more efficiently. It will also be able to adjust its height to tackle varying terrain and is equipped with four in-wheel motors to give it an ultra-sharp turning radius. The smart tractor will also be able to interface with other equipment on the farm, further increasing effectiveness and efficiency.

This isn’t the first time Kubota has shown off an eye-catching tractor concept. At the 1970 Japan World Expo, the company unveiled the very first Dream Tractor. While the cartoonish vehicle didn’t properly predict where farming was heading, it was also pretty cool looking.

As for the newest Dream Tractor, Kubota has no intention of putting the concept into production now or in the near future. But the company stressed that it will continue to explore autonomy and finds ways to apply it to its vehicles and equipment. We have no doubt.