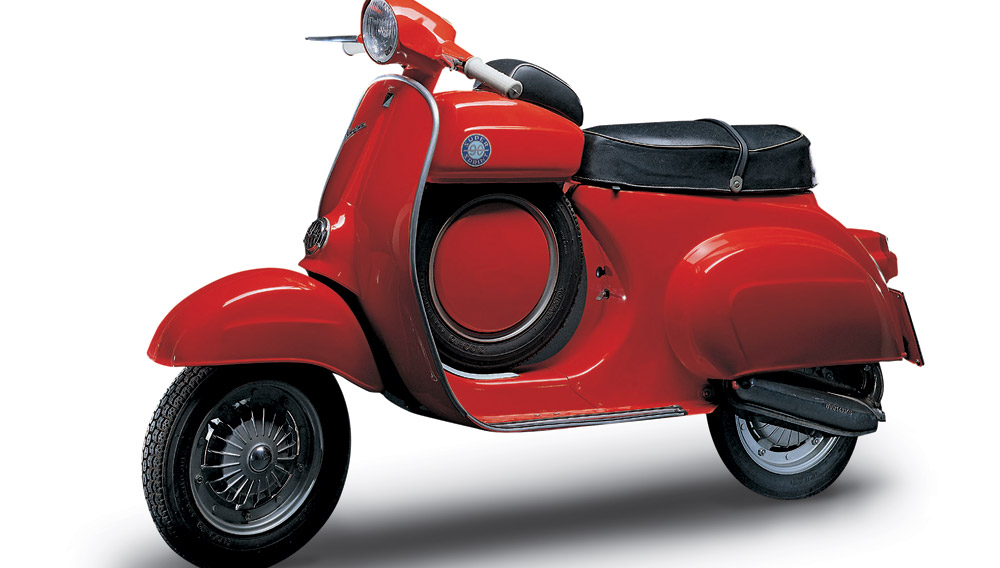 Seven or eight years ago, while on summer vacation in northern Italy, Gianluca Baldo was stung by a wasp, and he was never the same again. A friend surprised him with the gift of a vintage 1976 PX 200 Vespa—because vespa means “wasp” in Italian. It was not the same model as the Vespa scooters Baldo rode around Milan as a teenager in the early 1970s, but ultimately, it did not matter. He hopped aboard and “it triggered something incredible,” Baldo says. “The memory that that ride brought back was tingling in my brain. I certainly didn’t expect it, but that small spark turned into a fire.”

Baldo returned to San Francisco, where he now lives, leaving the PX 200 at his family home in Italy. But he could not leave behind “an unstoppable desire” to add more and more Vespas to his life. He now owns 70 of the vintage scooters, and three years ago he cofounded Bello Moto, a vintage Vespa shop in San Francisco that rents, sells, and restores the scooters and stocks authentic parts. Baldo admits that one of his motivations for opening Bello Moto was to generate enough work to keep a Vespa specialist busy full-time. “I don’t want a collection of metal,” he says. “I want a collection of pieces I’m able to take out and ride on short notice.”

You don’t have to be a born-and-bred Italian to love vintage Vespas. The scooter marque has a worldwide fan base and the United States is an active part of it. Introduced in 1946 by Piaggio, an Italian company that previously made aircraft, the Vespa was built to be easy to ride, easy to maintain, cheaper than a car, and tough enough to traverse roads ruined by World War II. Unlike a motorcycle, the Vespa scooter lets its rider sit erect and travel well dressed: Its frame contains the motor, protecting pant legs, skirts, and shoes from splatters of oil and grease. Of course it looks gorgeous; Italians designed it. The Vespa was a perfect fit for its Euro-centric postwar niche, but its reach soon expanded to meet the needs of riders far outside of Italy—and today, it attracts a passionate following of collectors around the word.

A fair chunk of the credit belongs to Piaggio’s marketing staff, who grasped the power of movies and helped Hollywood shine its klieg lights on the Vespa. “Piaggio was savvy about trying to get their scooters product placement,” says Paul Sachelari, a partner in Bello Moto and founder of the web site Scooter Lounge (www.scooterlounge.com). Gregory Peck and Audrey Hepburn famously tooled around Rome on a 1951 Vespa 125 in the 1953 classic Roman Holiday, a film credited with launching 100,000 scooter sales. Marcello Mastroianni rode a 1959 Vespa 125 in Federico Fellini’s 1960 film La Dolce Vita, and the musician Sting appears on a Rally 200 modified to look like a GS 160 in the 1979 movie Quadrophenia, after a GS 160 appeared on the Who’s album cover of the same name.

Piaggio pursued other smart PR moves as well. For decades, it published a pinup calendar depicting beautiful women with Vespas (past calendar girls include Ursula Andress, Angie Dickinson, Jayne Mans- field, and Raquel Welch), and from the mid-1950s through the 1960s, the company fielded an exhibition team whose stunts included jumping a Vespa over a row of barrels and balancing eight riders on a single scooter.

The hoopla over the little scooter continues today. In the same way that classic cars own the month of August, Vespa stakes its claim to June with two marquee events. The 2014 Vespa World Days festival, an international gathering of Vespa devotees, will occur June 12 to 15 in Mantua, a city in the Lombardy region of northern Italy. More than 4,000 will descend on the sold-out event, which includes a gala dinner, visits to a Vespa museum, a “Vespa Village” with market stalls full of Vespa parts and memorabilia, and Vespa tours of the surrounding countryside.

On precisely the same dates, a mostly American crowd will gather for the 22nd edition of AmeriVespa, which this year takes place in New Orleans. Roughly 700 aficionados will enjoy a Vespa concours, an indoor gymkhana with obstacle courses and other tests of skill, and several group rides, including a “ride to the bride” that ends with a wedding in City Park. The final day will feature a raffle of a rare early 1970s Vespa Turismo Sport, with half the proceeds going to local Vespa clubs and half to bankrolling the AmeriVespa festivities.

John Carolan, president of the Vespa Club of America, which hosts AmeriVespa, likens the sale of a rare vintage Vespa to an adoption. “We pour our blood, sweat, and tears into these things, and we put more money into them than they’re worth,” he says. “We’re a pretty close-knit community. [If I sell a scooter to you], I will see you at a rally somewhere else and I will ask you about it, and if I don’t see it, I will ask what’s up. For a lot of people, [these scooters] are like their children.”

The vintage Vespa community in America is small enough that the rarest and finest examples change hands not via public auction, but through private sales that can climb well into the five figures. The definition of a “vintage” Vespa is somewhat fluid. Gene Merideth, founder of Scooters Originali, a scooter restoration specialist in Allentown, Pa., says that the arrival of automatic Vespas in the early 1980s is a fair boundary marker, while Carolan defines it “just like they do for classic cars: 25 years old is vintage.” Sachelari simply states, “It’s pretty safe to say that as long as it has gears, you can say it’s a classic Vespa.”

Shops that specialize in returning a vintage machine to factory specs, such as Merideth’s, never sit idle. Merideth, who began riding a Vespa P 200 in 1985 as a 17-year-old in New Jersey, and who estimates he has worked on roughly 500 scooters over the last 27 years, typically has 20 restorations going at any given time, with about half being Vespas. His prices run between $7,000 and $10,000, not least because he uses authentic Vespa parts made in Italy, which cost more. “From a collector’s point of view, if you don’t do it back to factory specs, it loses value and salability,” he says. “There’s lots of interest in having scooters put back in original condition.”

One of Merideth’s restorations found its way to the Museum of Modern Art. The 1960 Vespa GS 150 was a rare spec job: He purchased the machine in New Jersey about 20 years ago. Then he got a call from a Vespa dealership in Manhattan looking for some vintage window dressing. Not long after the dealership placed it on display, a buyer made a generous offer and donated it to MoMA. The Vespa is now in the museum’s permanent collection, but not currently on view.

Merideth does not do spec jobs anymore. “We have so much restoration work coming in,” he says, “we’re doing better and better.” Baldo’s Bello Moto in San Francisco—which charges $4,000 to $6,000 for a standard restoration—is tapering off its spec work too, for the same reason.

While baldo will always have a soft spot for the 125 Primavera, which he loved most in his Vespa-riding youth, he nominates his 1967 90 SS as his greatest delight. Manufactured from 1965 to 1971, Piaggio made just 5,300 of the model; today, a 90 SS in excellent to pristine condition will command $15,000 to $20,000. The model appealed to teenagers because it covered its spare wheel with a glove box styled to resemble a fuel tank, and it had chest padding on the top. The sporty touch invited riders to lean far forward as if they were on a racing bike.

“I was able to find one in perfect condition,” Baldo says of the scooter. “It’s probably the most valuable one I have. It’s a very sexy shape.” But unlike most of the other 69 Vespas he owns, “I do not ride it,” he says. “If you see it parked, I assure you, someone is going to take it out from under you. It’s like a diamond.”

Sachelari once discovered a diamond of his own: a 1967 Vespa that was literally mint-in-box before the seller contacted him. It was a model that Piaggio produced for the American market for sale through Sears and its catalog. The deal between the Italian company and the American store lasted from the early 1950s until 1967. Despite the popularity of Roman Holiday, which was released in 1953, none of these scooters actually bore the Vespa name (though they did bear the “Piaggio” imprint if you knew where to look). Most were badged with Sears’s house brand, Allstate.

About 12 years ago, Sachelari received a message from a man who said he had an old Vespa still in its shipping crate. Sachelari was skeptical, but agreed to drop by and see the machine. “Sure enough, it was just mothballed,” he says, and he relays the backstory. The man’s father, a pious Catholic, pounced on a Sears clearance sale and bought 10 of the vehicles, intending to donate nine to missionaries around the world and keep one for himself. Of those nine, he held back one that had been earmarked for Africa when he learned of the high import duties. But he never used it, so it sat in its original crate until he moved to a retirement home and his sons unpacked it when they were cleaning out his house.

They assembled the Vespa, but thought better of filling its tank with fuel. “You don’t have to be a genius to realize its value,” Sachelari says, remembering that he told the son who contacted him that it was worth a lot and he would love to buy it. The man balked but relented eight months later in a deal that required Sachelari to buy the father’s scooter as well, which has a serial number one digit off of the never-driven one. Sachelari, in turn, sold it to Baldo because, he says, “I can’t really do it justice sitting in my garage.”

Baldo is rightly proud of it. “It has four original miles on it, the four that Piaggio put on it on the test track before shipping,” he says. “The tank is as dry as it was in Italy when they put it on the boat.” But as Baldo tells it, the pious man’s sons insisted on checking him out as well, even though they were not directly involved in the sale. “They told me, and I believe them, that there were people willing to offer twice as much,” he says. “When you locate one of these rare scooters, a true scooterist doesn’t go for money. He goes for the destination, for the persons who are going to get it.”