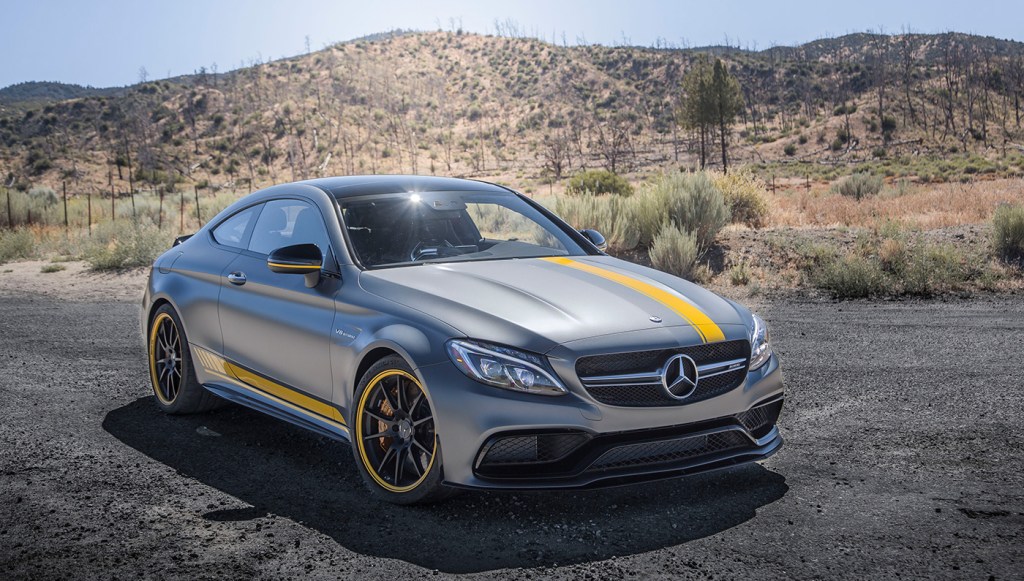 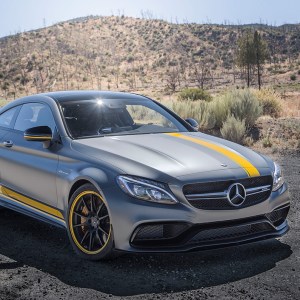 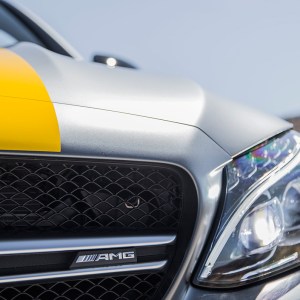 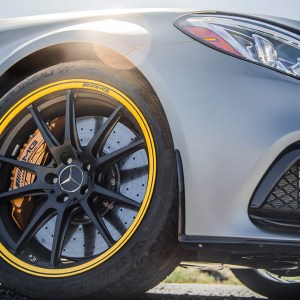 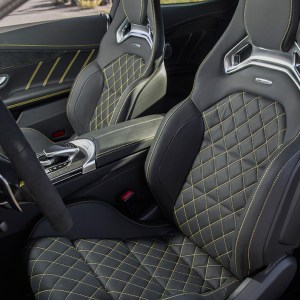 You can hear the AMG C63 S Coupe coming before it pulls into view.  From around the corner, an assured rumble emanates from AMG’s hand-built, 4.0-liter biturbo V-8 engine and performance exhaust. The ultrahigh-performance version of the C-Class Coupe is elegance with attitude—especially clad with the Edition 1 package, a livery that mimics that of Mercedes-AMG’s DTM (German touring car series) racecars. Bright yellow asymmetrical racing stripes practically glow under a gloomy sky; they run the length of a body painted in Selenite Grey Magno, a metallic paint with a matte finish. An equally electric yellow trim runs along the edge of staggered black twin-spoke wheels (19s in front, 20s in the rear), AMG’s carbon ceramic rotors with bronze-painted calipers peeking through. While the standard AMG C63 is almost understated, the Edition 1 is anything but.

With the streets still wet from a rare Southern California rainstorm, we click it into Sport Plus mode and head for the hills. In the cabin are AMG’s superb sport seats with diamond-quilted leather and much more yellow trim. In all, the Edition 1 adds an array of aesthetic and race-inspired options that push the $75,000 base price up to $94,600, including matte carbon-fiber accents and a performance steering wheel covered in Dinamica, a grippy Alcantara-like material.

With 503 hp under the hood, the AMG C63 S has more than enough power to conquer the sweeping turns of Sunset Boulevard as we drive west toward the ocean. It’s torquey even at low revs, and with a maximum of 516 ft lbs at our disposal, it’s easy to get too much wheel spin off the line at what seems like far too many stoplights. Turning north onto Pacific Coast Highway, we hit the throttle and whizz by a plethora of Priuses as the engine purrs and the exhaust growls. Steering-wheel paddles are there in case the driver feels like pulling flaps, but the 7-speed transmission does it perfectly well on its own, accompanied by a delightful crackle here and there out of the twin tailpipes. The sound is never obnoxious, however, unlike that of the Jaguar F-Type R that we keep pace with for a while, fussing and cackling as if suffering from an auditory Napoleon complex. As we cruise toward Malibu, we switch over to Comfort mode, where the soundtrack and the sport suspension become more subdued, although even in its most docile setting, the ride in the AMG C63 is firmly sprung.

Although we prefer to give the AMG 63 S Coupe a workout, it more than suffices as a daily driver, as long as nobody has to squeeze into the rear seats. Mercedes’s Comand interface is standard, with navigation and real-time traffic displayed on an 8.4-inch screen. Standard safety features include adaptive brake technology and a collision mitigation system, which help in stop-and-go traffic. And there’s plenty of space in the trunk for luggage.

Turning off onto one of the less-traveled canyon roads, we switch it back to Sport Plus and start climbing. As the roads narrow and the curves tighten, the steering stays direct and precise. In a day when many equate a heavy steering feel with sportiness, the engineers at AMG know that responsiveness doesn’t have to leave you with aching biceps. The chassis is stiff and balanced as it’s tossed to and fro, and the front carbon ceramic brakes are fantastically bitey, with a short pedal travel that inspires confidence going into the trickiest hairpin. We smile as we speed toward the Kanan Dume tunnel and let ’er rip with the windows down, that AMG sound ringing through a tube of concrete and steel.

“It’s a real beast,” Matthias Schöttle, from the AMG development team, would later tell us.