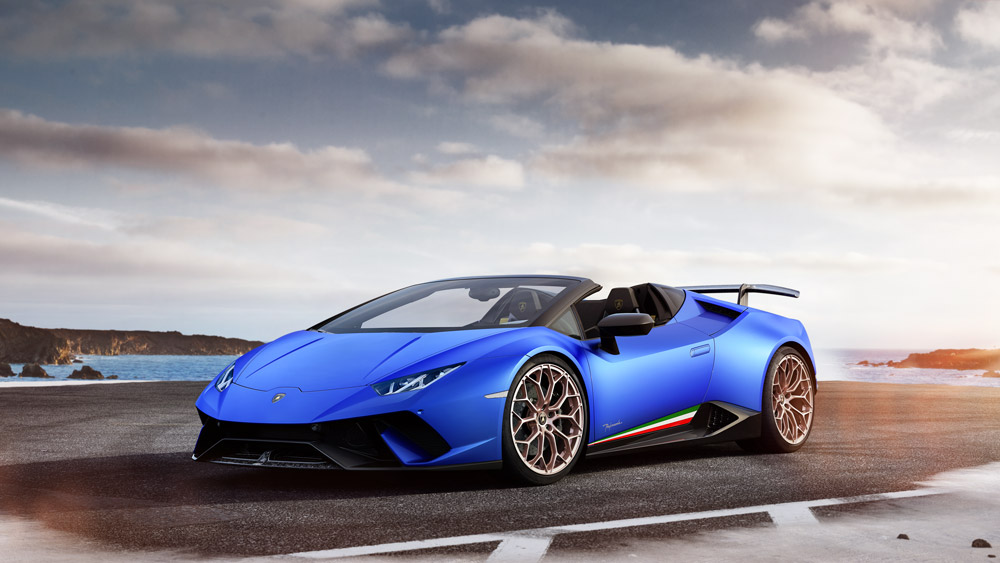 Top-down tourers have often sacrificed function for form, giving comfort and performance a back seat to increased visibility. But the Lamborghini Huracán Performante Spyder changes all that, raising the bar on lowering the roof.

The latest Huracán variant (starting at $308,859) is a sibling of the Performante coupe, which has set numerous lap records at tracks around the world. Like the coupe, the 640 hp roadster features an aluminum body complemented by forged carbon-fiber components and carries a naturally aspirated 5.2-liter V-10—with 442 ft lbs of torque—mated with a seven-speed LDF dual-clutch transmission. That power-train combination allows for the same 201 mph max speed as the hardtop, and a zero-to-62-mph acceleration time of 3.1 seconds (and it can come to a complete stop from 62 mph in 103.3 feet)—all while weighing in at 77 lbs less than the standard Huracán Spyder.

On a recent test drive in Napa, Calif., the open-air Performante proved the perfect pairing with the wine-country’s winding corridors. I found it nothing short of inebriating as I traced around renowned vineyards, the air—redolent with the region’s terroir—caressing the interior of the car. It was also on the region’s bucolic bends that the vehicle’s ego-boosting responsiveness truly revealed itself.

Helping to tame the twists and turns are a bolstered suspension and electronic stability- control features, refined Lamborghini Dynamic Steering, a permanent four-wheel-drive configuration, and three drive modes: Strada, Sport, and Corsa. And the Performante Spyder’s handling will make any pilot feel grand-prix ready, thanks to the innovative Aerodinamica Lamborghini Attiva active aerodynamics—a system that includes flaps that automatically activate or deactivate in a half second to minimize drag or optimize downforce.

A little slower to engage, but still impressive, is the electrohydraulically operated soft cover, which closes in 17 seconds, even while traveling at 30 mph. A convertible without compromise? Now that opens everything up.