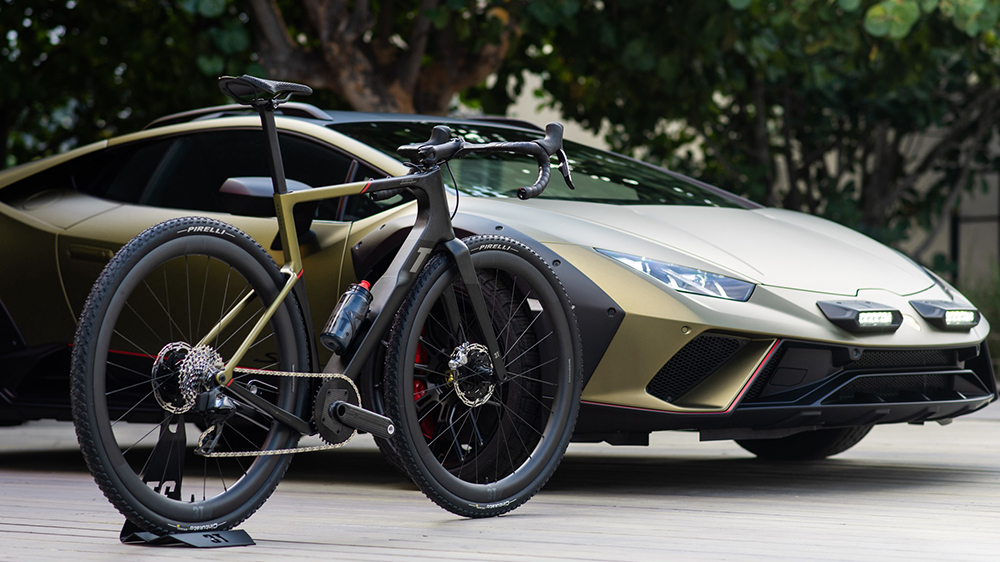 Turns out you’ll be able to buy the new Lamborghini Huracán Sterrato with two or four wheels.

That may sound a bit odd, but the Italian marque has teamed up with 3T for an exclusive gravel bike based on its new off-roading supercar. The two-wheeler may lack the mechanical might of its namesake, but there will be plenty of places it can go that coupé can’t dream of venturing.

The stylish bike isn’t just based on the final Huracán; it’s also based on 3T’s popular Exploro RaceMax, its fastest gravel model. The Italian-made frame of the bike comes in four sizes—51, 54, 56 and 58 inches—and was inspired by the construction of the supercar, according to HiConsumption. The ultra-aerodynamic structure is made primarily of carbon fiber and has been injected with RTM resin to increase strength and stiffness without adding extra weight. It features a paint scheme like that of the four-wheeler, with matte Verde Gea and black accented with orange.

Of course, a bike, especially one designed for gravel riding, needs to do more than just look good. Fortunately, it sounds as if the Exploro RaceMax x Huracán Sterrato should be able to hold its own, even without the aid of the supercar’s 5.2-liter V-12. A Fango RaceMax fork, Apto Stealth stem, Sram Red brakes and 3T’s own proprietary drivetrain will help you zip around any course or trail with pace, no matter how treacherous the terrain may be. The bike’s 700c Pirelli Cinturato Gravel M tires can handle on- or off-road conditions with ease, too.

The Exploro Racemax X Huracán Sterrato can be ordered now through the 3T website, and will set you back $15,000. That may sound steep for a bike, but hey, it’s about 1/20th of what the other Sterrato costs. And, if you want a Huracán Sterrato that isn’t a vehicle, there’s always the latest Roger Dubuis Excalibur Spider, which was also inspired by the supercar.