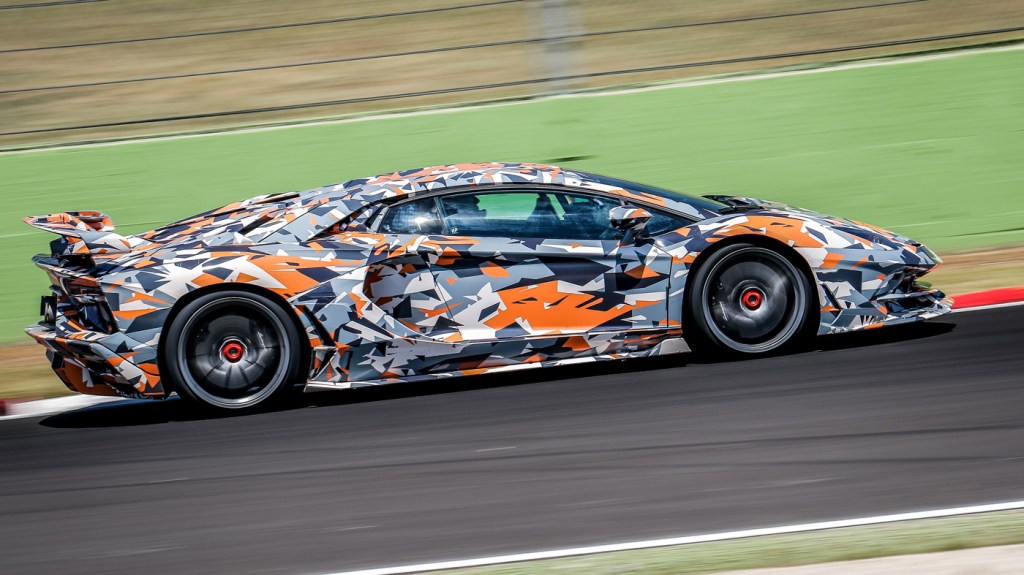 “I never planned on getting into the automobile industry,” Ferruccio Lamborghini once said, “but I knew a better car could be built.” A quarter-century after his passing, Lamborghini’s namesake continues to raise the bar on supercar development, as evidenced by the announcement that the Lamborghini Aventador SVJ set a lap record for production cars at Germany’s Nürburgring Nordschleife circuit on July 26.

Hadn’t heard of the Aventador SVJ before yesterday? That’s probably because it’s the latest Raging Bull in Sant’Agata Bolognese’s ring, and still under wraps—literally. Covered in camouflage, the new Aventador variant crushed the 12.8-mile course’s twists and turns in a historic time of 6 minutes 44.97 seconds. With that chronographic count, Lamborghini resolved some unfinished business with Nürburgring, which has become the benchmark test track for car manufacturers. On October 5, 2016, the company’s Huracán Performante posted a trailblazing time of 6 minutes 52.01 seconds, only to have that pierced by the Porsche 911 GT2 RS on September 20, 2017. The Porsche’s performance came in at 6 minutes 47.3 seconds—no miniscule difference by motorsport measurement.

With Lamborghini team driver Marco Mapelli behind the wheel, the Aventador SVJ’s redemptive run reflects the extensive engineering and design research that has been integrated into the vehicle. Among the innovative features carried by the four-wheel-drive coupe are rear-wheel steering, electronic stability control, and the Aerodinamica Lamborghini Attiva 2.0 (ALA). The patented ALA system offers active aerodynamics employed by the front spoiler and rear wing. These include flaps that can be activated or deactivated in 500 milliseconds to minimize drag or optimize downforce, respectively.

A follow-up to the 740 hp Aventador SuperVeloce (SV), introduced in 2015, the new version adds the “J’ for “Jota”, which references the work Lamborghini began in 1970 to meet the Fédération Internationale de l’Automobile (FIA) Appendix J rules for competition. That project led to the one-off Lamborghini Miura Jota.

Other than disclosing that the record was set with Pirelli P Zero Trofeo R tires (the production car will come with custom Pirelli P Zero Corsa), Lamborghini has little else to say about the SVJ for now. All that will change, however, when the apex Aventador makes its public debut at the Quail, a Motorsports Gathering in Northern California on August 24.