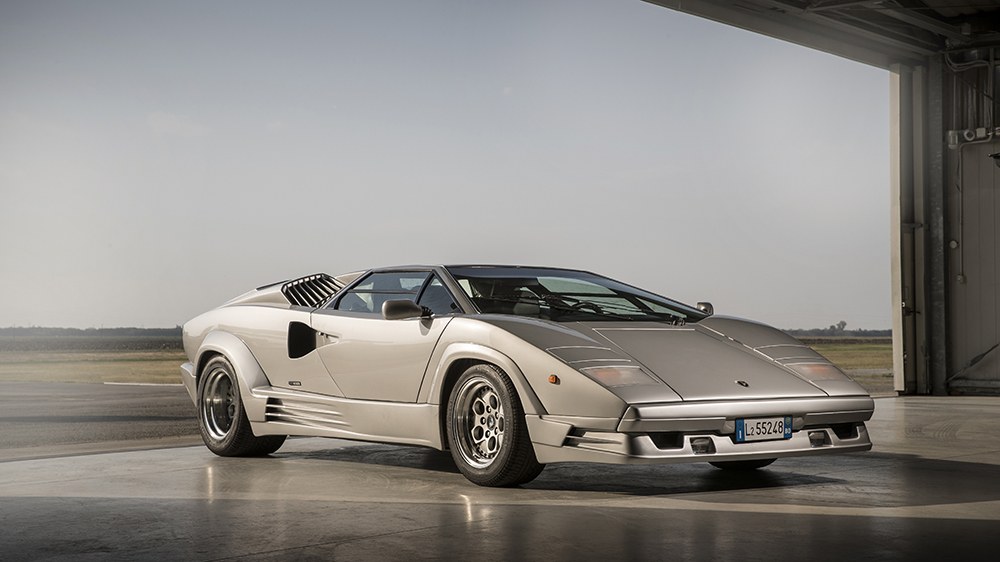 The supercar, which went into production in 1974, changed the way Ferruccio Lamborghini’s marque would be viewed forever. The company had already proven it could hold its own against Ferrari with the gorgeous Miura, but it was that car’s successor, the Countach, that helped make the Raging Bull into what it is today. It was a vehicle that emphatically stated that Lamborghini cared as much about design as it did boundary-pushing performance.

The vehicle certainly evolved over its 16-year production run, but there’s no denying something special was happening from the very beginning. The first version, the LP400, helped popularize the now iconic Italian wedge shape, while the last iteration, the 25th Anniversary Edition, was packed with features that have been seen on countless supercars in the decades since. Not to mention the fact that its beastly V-12 mill was capable of producing the sort of power that was virtually unheard of in 1974.

Here’s how and why the Countach became an automotive icon—the most famous Lamborghini ever made.

The Lamborghini Miura made quite the splash upon its debut in 1966. Yet by the end of the decade, the model’s bold design and performance didn’t stand out the way they had a few years earlier, especially when compared to the Ferrari Daytona. Because of that, Ferruccio Lamborghini set a lofty goal for his designers and engineers in 1970: create a car that could live up to the high standards set by the Miura—and then surpass them.

The team assigned to the project, which was codenamed “LP112,” included chief engineer Paolo Stanzani, assistant engineer Massimo Parrenti, designer Marcello Gandini of Bertone and test driver Bob Wallace. They quickly set about creating an all-new vehicle that took some of the Miura’s best features—like its styling and rear-mid-engine layout—and corrected (or completely jettisoned) some of its worst, such as its uneven weight distribution and poor high-speed stability. But the biggest difference was in the car’s purpose. The Miura was a grand tourer, a favorite of the marque’s founder, while the new model would be purely a sports car.

It couldn’t have been an easy feat, but a prototype was ready by 1971. The new car would make its debut at that year’s Geneva Motor Show as the LP500 concept and leave the automotive world in shock—a fitting reaction since the car’s name is an exclamation of astonishment in the Piedmontese language (which is spoken in the northwest of Italy). As with all prototypes, there was still work to be done, but by 1974 the finished car was ready for its moment in the spotlight.

How to Pronounce It

A Bold Design: The Wedge

Ever wonder why so many supercars have that distinctive wedge shape? The answer is the Countach. It wasn’t the first vehicle to sport the bold design flair—that would be the DAF55 Siluro—but it is the car most responsible for popularizing the shape and giving it a legacy that lasts to this day.

The body shape, which would remain relatively unaltered throughout the nameplate’s 16 years, is far from the only eye-catching element of its design. Gandini, who also designed the Miura, outdid himself with the Countach, dreaming up a wide and low-set vehicle with bold lines. The car was made to do two things: look cool and go fast. The interior was dominated by geometric shapes that mimicked the lines of the exterior, and its two seats were positioned so low that you’re practically sitting on the floor while driving. It also looked futuristic from the very beginning, thanks in part to its rocket-ship-like rear end and scissor doors. The Countach, in fact, was the first production vehicle to incorporate the over-the-top door design.

There is a very clear line between the first Countach and the final example, but you can also see how the industry evolved by tracking the changes among the car’s five distinct iterations. Over time, its shape became even more angular. Aerodynamic elements such as vents and fenders grew more dramatic, and the car sprouted a giant rear wing.

Of course, new designs can bring unexpected challenges. The Countach looked like no car before it—in part because a lot of design decisions seem to have been made with style, not function, in mind. Drivers couldn’t see out the rear window of the first Countach, the LP400, so a special periscope-like rig was set up to help (earning it the very apt Periscopo nickname). The cabin, while looking very chic, wasn’t particularly comfortable, either, managing to be both cramped and poorly ventilated. Practicality was not its calling card, one reason why it’s been called the “inconvenient ideal.”

As thrilling as the Countach’s design may be, it’s far from the only reason the car is considered an icon. The vehicle is a supercar in the truest sense of the word, mixing a bold look with equally impressive performance.

Every single example of the Countach is powered by a naturally aspirated V-12 engine with a Longitudinale Posteriore orientation—that’s where the LP in its full name comes from—meaning it is situated parallel with the length of car and near the rear. This was the first time the engine layout was used on a road vehicle. Like many elements of the Countach, it has become much more commonplace in the years since, especially on Raging Bulls. The engine is mated to a five-speed syncromesh manual gearbox situated between the car’s two seats, which sends power to the rear axle.

Like the vehicle’s design, its V-12 power plant evolved over time. The first was a 4.0-liter mill that produced 370 hp and 270 ft lbs of torque, while the final and most refined version was a 5.2-liter engine that churned out 449 horses and 370 ft lbs of twist. Regardless the exact size and output of the engine, the Countach was fast for the time. Depending on engine configuration, the car covers zero to 62 mph in anywhere from 5.9 seconds to 4.5 seconds and tops out between 158 mph and 185 mph.

The Countach was in production from 1974 to 1990. That was more than twice as long as its predecessor, the Miura. Over that period, Lamborghini built and released five distinct iterations of the supercar.

Two different versions of the Countach were sold during the ’70s. The LP400 Periscopo, which went on sale in 1974, was the most stylistically pure version of the car and was powered by a 4.0-liter V-12. It was followed in 1978 by the LP400 S. That model actually features a downgraded engine and is the least powerful Countach of the bunch. It did get wider tires and more prominent wheel arches, helping establish the look that most people think of when the Countach name comes up (it was also the model featured in The Cannonball Run).

The ‘80s saw the release of three different Countach models. The first, the LP500 S, showed up in 1982. It looked identical to the LP400 S but had a 4.8-liter V-12 power plant. It was followed three years later by the LP5000 Quattrovalvole (or QV). It had a bolder, chunkier design, but the biggest difference was a 5.2-liter V-12 with four valves per cylinder (hence the quattro valvole moniker). The final version, the 25th Anniversary Edition, first went on sale in 1988 and was built until 1990. Mechanically, it was the same as its predecessor, but this model was restyled by Horacio Pagani, who made the car’s aerodynamic elements bigger and bolder than ever before.

The Countach is now widely regarded as Lamborghini’s defining model, but it never sold that well during its lifetime. This was due, in no small part, to its impracticality and sky-high price tag (for the era, at least). That might explain why the marque started working on its successor in the mid-’80s. That car was the Diablo, which premiered in 1990, the same year the brand wrapped up production of the Countach.

Countachs Are Still Coveted at Auction

Exclusivity is nothing new for Lamborghini. Despite a run that lasted the better part of two decades, only 2,049 examples of the Countach produced. That, combined with the car’s historical importance, make prime examples hard to find.

The price of the Countach rose from $52,000 to $145,000 while it was still in production, and it has grown exponentially since. On the rare occasion that a Countach is listed for sale or hits the auction block, it can be expected to more than double its original sticker price. Over the last few years, we’ve regularly seen the car sell in excess of $300,000, and one example sold for just shy of $1 million last month.

Of course, the secondary market isn’t the only place to score a Countach. Lamborghini is making the car again—kind of.

Last year marked the 50th anniversary of the original LP 500 concept’s debut, and Lamborghini wasn’t about to let a milestone like that pass without a celebration. In August, the marque announced it was bringing back the legendary nameplate as a hybrid supercar. Needless to say, the automotive world lost its collective mind.

The new Countach LPI 800-4 was one of the boldest debuts of 2021. It features a modernized take on Gandini’s design but still holds on to most if its trademark elements, including the scissor doors. The bigger deviation is in the power train. It’s still powered by a V-12—one which can pump out 769 hp—but it’s joined by a 48-volt electric motor that adds an additional 33 hp, bringing total output to 802 hp.

As impressive as those specs may sound, the car hasn’t been without its detractors, including original designer Gandini. Some critics seem to view the car as little more than a re-skinned Aventador released solely to make money. That’s because the car is priced at $2.64 million, which is a whole lot more than the cost of a well-maintained original. Regardless, something tells us that Lamborghini isn’t losing any sleep from the criticism. The electrified Countach’s 112-unit production run sold out almost immediately.

Believe it or not, the LPI 800-4 wasn’t the only new Countach to debut in 2021. In October, the marque also revealed it had built an inch-perfect replica of the original LP 500 prototype for a “very important Lamborghini customer.” It’s unclear who commissioned the project, or how much they paid for it, but it’s hard to imagine the one-of-a-kind machine would cost less than seven figures.

What is clear, however, is that half a century on, the passion for the Countach is alive and well.