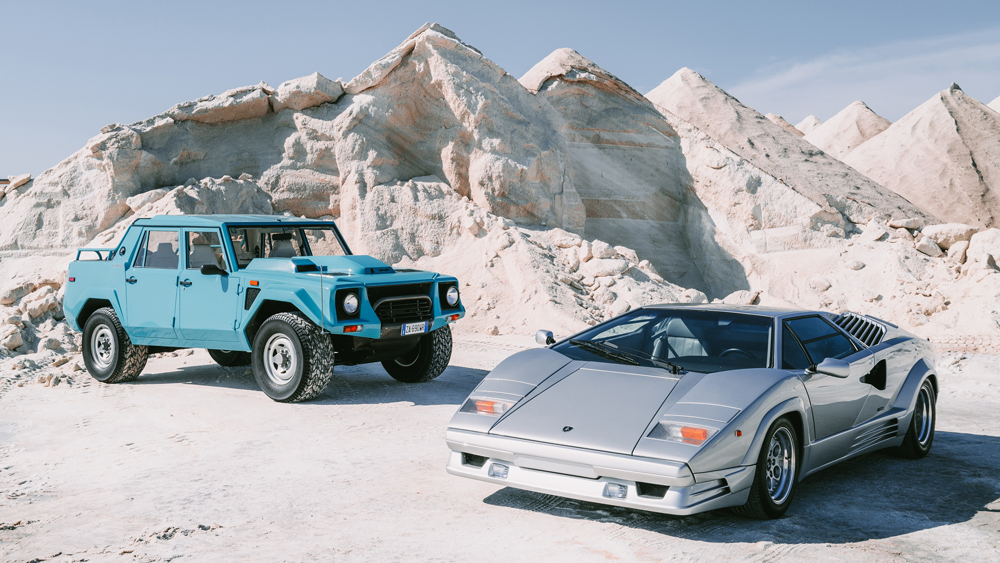 As Lamborghini’s longstanding era of pure V-12 power comes to a close, the carmaker says it will cling to the supernumerary powerplant configuration while adding hybrid technology to the mix. That’s a win for enthusiasts who are attached to cylinder count (and can appreciate the boosted torque of added electricity), but a mixed bag for those with a soft spot for the way things were. To understand where we are at this crossroads of electrification, let’s take a look back at two of Lamborghini’s dramatically different V-12 models.

The Countach: A Poster Car Is Born

By 1971, Lamborghini was hot on the heels of the slinky Miura and ready to unveil the Countach. The wedge-shaped supercar was so wild looking that its name was allegedly lifted from the Piedmontese expletive uttered by a gobsmacked observer. But it was more than a pretty face: The Countach’s 12-cylinder powerplant was an important signifier of excess that matched the brand’s outlandish styling and bad boy image. The follow-up to the Miura organized the 60-degree V-12 engine longitudinally rather than sideways, growing to 5.0 liters of displacement.

The supercar that would land on seemingly every kid’s poster started life as a more minimalist model. Devoid of spoilers and fender flares, the so-called “Periscope” LP400 appealed on a different level thanks to its alien looks and smooth, flush surfaces. Not until the debut of the heavily flared LP 400 S model in the film The Cannonball Run did the Countach land on posters everywhere, flaunting sexy hips, low-profile Pirelli P7 tires, and an angular rear wing.

Sports car fanatics often revert to finger pointing at SUVs, but Lamborghini presciently adopted the genre long before it was cool to diss sport ‘utes. Case in point: the oddly named LM002, which leveraged the 5.2-liter V-12 from the later Countach models and stuffed it into a boxy body that later earned the nickname “Rambo Lambo,” partly inspired by one owned by Sylvester Stallone. Originally commissioned as a military vehicle under the “Cheetah” moniker, the LM002 made several modifications to the V-12, including rotating it 180 degrees in order to accommodate all-wheel drive hardware and trimming 20 hp so it could run on cheaper fuels found in remote regions. No Lamborghini story is complete without an absurd postscript, and in the LM002’s case it pertains to a special model that was outfitted with a 700 horsepower, 7.2-liter V-12 typically reserved for offshore racing boats.

If Lamborghini’s just-unveiled off-road Huracán is any indication, the folks in Sant’Agata still have their finger on the pulse for all things ridiculous; the slideways supercar lives just on the right side of crazy. Ideas just wacky enough to work have been a hallmark of brand since Ferruccio Lamborghini formed the company in 1963 to spite Enzo Ferrari, and all signs point to that trend continuing. If looking back at 60 years of V-12s teaches us anything, it’s that adaptability can go both ways—launch a ludicrous engine, but amortize the effort across several engines so it makes sense. Here’s to hoping Lamborghini’s upcoming hybrids are as sensational as their pure internal combustion engines of the past.