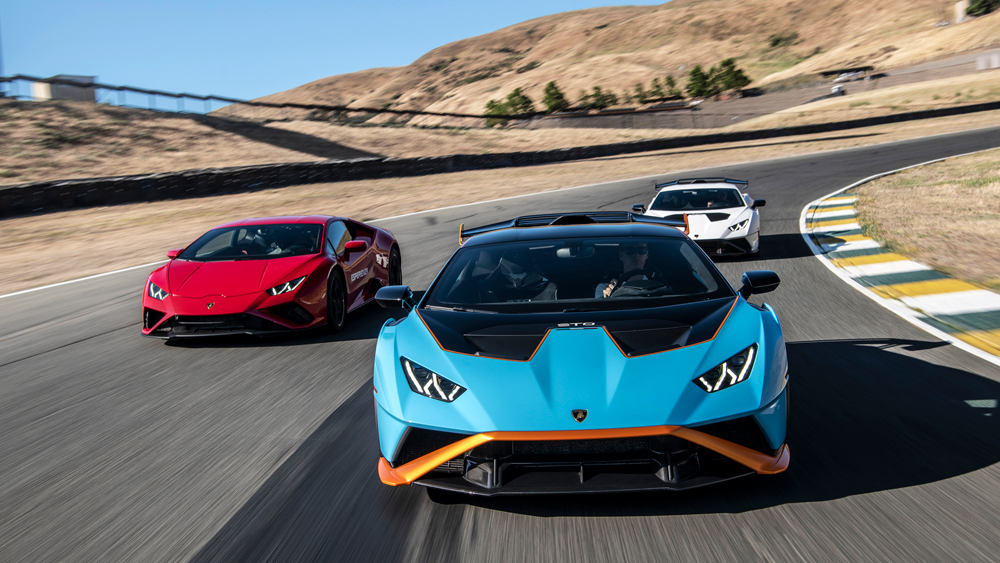 A car from Automobili Lamborghini means different things to different people, whether it’s a life-long dream realized, a worthy rival to the house of Maranello, a wedge-shaped status symbol or a bold expression of one’s own self-confidence. But ripping into Sonoma Raceway’s uphill, off-camber first turn at around 145 mph in a Lamborghini Huracán STO provides one conclusive definition. Lamborghini’s origins may be in tractor manufacturing but, today, this Italian-rooted, German-run marque seems determined to produce some of the most exciting vehicles on the planet.

To let enthusiasts find out just how exciting is the mission of a growing menu of Lamborghini Esperienza programs, which seek to bring everyone from collectors to prospective owners into the Raging Bull’s distinctive ring. The idea is a simple one, and increasingly common among luxury automakers looking to woo consumers presented with a growing array of choices: Purchase a car and buy into a lifestyle.

Lamborghini’s Esperienza offerings allow guests the opportunity to sample the prowess of model lines like the Huracán and Aventador.  Drew Phillips, courtesy of Automobili Lamborghini S.p.A.

“We want to feel connected to our clients, there can be no distance between us,” says Andrea Baldi, CEO of Lamborghini North America, who is on site for this Esperienza session.

Baldi says Lamborghini customers are, on average, younger “than our competitors,” which, although the name is never mentioned, is assumed to be Ferrari. Specifically, Lambo buyers are between the ages of 35 and 45, and typically CEOs or successful entrepreneurs, according to Baldi. The Esperienza programs offer these guests the opportunity to sample the prowess of model lines like the Huracán and Aventador, as well as the Urus SUV, in a variety of settings around the globe.

When it comes to the Huracán and Aventador, that typically means playing on track or on the snow and ice, while Urus romps are in challenging off-road locations ranging from Iceland to Transylvania. Prices vary due to location and program length, which in some cases can last days and include ancillary adventures such as—in the case of the recent Sonoma outing—winery tours and hot-air balloon flights.

The Urus has been particularly critical to Lamborghini’s resurgence; 70 percent of Urus buyers are new to the brand. But Lamborghini says all current inventory, across model lines, is sold out, and the wait to receive a vehicle can be more than a year. Some Esperienza guests are, in fact, brand-new Lamborghini owners eager to get a sense of the outer limits of their forthcoming purchase.

“For many, they only know their car on the [car configurator] computer screen,” says Baldi. “Here, they can take the real thing to the limit while they await their cars.”

Esperienza programs include Neve (“snow” in Italian), which brings drivers to the Italian Alps to learn the art of drifting Huracán STOs on ice, followed by pampering at the Lac Salin Spa and Mountain Resort in Livigno. Accademia Corsa is for those eager to step into the world of amateur racing. And Giro allows Lamborghini owners to experience lavish, curated road trips—in their own vehicles—on multiple continents.

The Esperienza Avventura option is for those seeking to test the limits of Lambo models on formidable off-road terrain. Last year, customers across Europe and the Middle East took the Urus across rugged gauntlets comprising hundreds of miles. The Iceland trip alone saw the Urus tackle places such as the Geldingadalir Valley, Kvernufoss waterfall and Katla Glacier.

Finally, there is Esperienza Dinamica, which provides access to a full complement of Lamborghini models on and off track, and, in the version that unfolds in Italy, can include an exclusive trip to both the factory and the fabled circuit at Imola.

Robb Report was recently invited to an abridged version of the Dinamica program on a gloriously sunny afternoon in Sonoma, Calif., just north of San Francisco. The activity kicked off with 90 minutes of Urus seat time in the hills above the racetrack. A team of seven instructors were on hand to counsel and guide, including Richard Antinucci—multiple-time winner of Lamborghini’s Super Trofeo series.

Most of the drive was meant to showcase the SUV’s versatility, from hunkered-down speed demon to comfortable off-road mountain goat. At one 18 percent incline, the Urus quietly and capably summited the rise at a steady 15 mph, and then took itself down the other side calmly in hill-descent mode without me having to touch the pedals.

A bit more challenging was a slalom run across a dusty dirt road. Given that the SUV’s 641 hp twin-turbo V-8 can rocket the Urus to 60 mph in 3.1 seconds, sliding it through the cones takes some getting used to. Ultimately, it’s a rewarding experience that awakens my inner child, much like sledding down a snowy embankment.

But the real fun happens next. Antinucci and his fellow instructors are paired up with guests for personalized lead- follow sessions on a track that is well known for its elevation changes. For the first set of laps, the instructors lead in the Huracán STO while participants pilot Huracán Evos.

On paper, the two cars seem similar, packing the same 5.2-liter V-10. But the STO, costing nearly a third more, is the Evo on a race diet. A combination of active aerodynamics and acres of carbon fiber mean the STO is a scalpel to the Evo’s steak knife.

All smiles after a high-performance game of follow the leader—Lamborghini style.  Drew Phillips, courtesy of Automobili Lamborghini S.p.A.

My Evo is set in fully automatic mode, and makes me feel like a champ. Shifting on its own through seven speeds, the Evo allows the driver to fully concentrate on, in this case, making sure the wide tires follow Antinucci’s line as closely as possible. Also critical is to brake precisely where the pro does. Do both with reasonable skill and you feel like an ace.

But the game changes when the cars are swapped. I’m buckled into the shark-like STO when a hand reaches in and flips a steering wheel–mounted switch from STO mode to Trofeo mode, effectively telling the car that it’s truly track time.

What I don’t know is that Trofeo mode puts the car permanently in manual, meaning that, in addition to the racing line, apexes and braking points, I now have to worry about the redline. For a number of turns, I hit that 9,000 rpm point, repeatedly. My eyes are glued to the blurring track, so the sound is all I have to dial in my paddle-shifted changes.

Eventually, I get the hang of it and the STO truly comes alive. A rhythm slowly gets established on the uphill sweeps, downhill plunges and quick shifts from fifth gear down to second before a series of sinuous S-curves. By the time a level of comfort settles in, it’s time to pit and hand back the helmet and balaclava in exchange for a welcome high-five from Antinucci.

A dinner at the Donum Estate winery caps off a day of track work.  Drew Phillips, courtesy of Automobili Lamborghini S.p.A.

I certainly learned about my own limits, and even pushed them a bit. But the true gift of the Esperienza program lies in experiencing all of this in the company of folks for whom buying a Lamborghini means more than simply getting the keys to a new car.

“We are car builders, not retailers, but that doesn’t mean we can’t share the passion we have and become friends with our clients,” says Baldi. “And when you’re at speed, the barriers break down.”