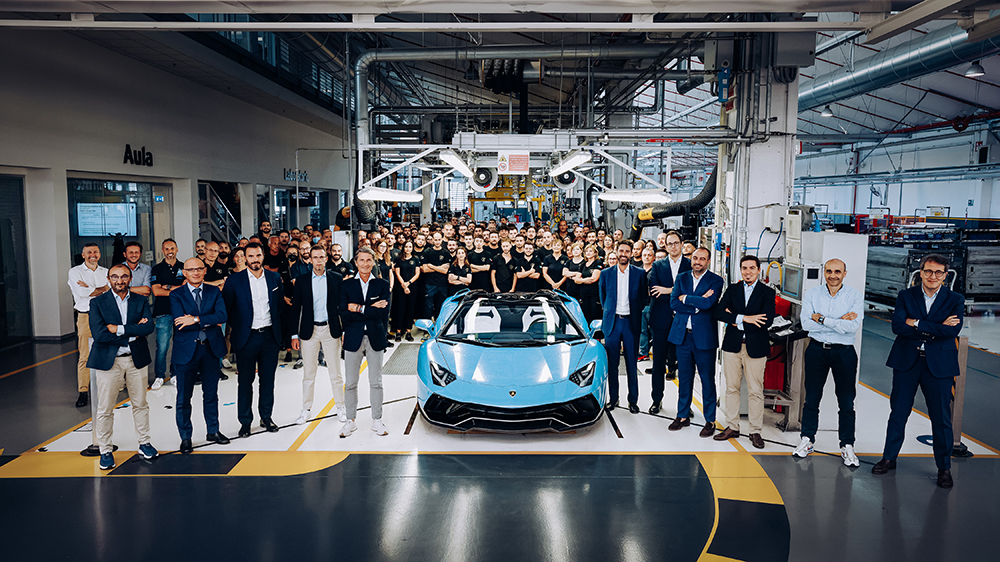 Lamborghini is saying goodbye to the Aventador again.

The Italian marque announced on Monday that the final example of its 15th production model had rolled off the line at its facility in Sant’Agata Bolognese. This is the second time this has happened, as production of the discontinued supercar had to be restarted earlier this year after several of the final examples sunk along with the Felicity Ace cargo ship.

The final Aventador is an Ultimae Roadster finished in a unique shade of blue whipped up by the automaker’s Ad Personam personalization division. It’s destined for an unnamed buyer based in Switzerland. The open-top speed machine is also the last pure, naturally aspirated V-12 Lamborghini that will ever be built at Santa’Agata Bolognese.

Production of the Aventador originally wrapped up at the tail end of last year. But then the Felicity Ace sank off the coast of Portugal’s Azore Islands earlier this year. Over $400 million worth of vehicles went down with the cargo ship, including 85 Lambos, 15 of which were examples of the Aventador’s final variant, the Ultimae. In response, Lamborghini announced that it would temporarily restart production so that those lucky enough to snag one of the final build slots received their vehicles.

The Aventador has been a massive success for Lamborghini. The brand built 11,445 examples of the supercar during the 12 years it was in production, making it one of its most popular vehicles. It’s easy to see why it was such a hit, as it effortlessly combines a flamboyant design with hair-raising performance, thanks to its massive 6.5-liter V-12. Eight variants were built following the Aventador’s debut in 2011, along with several special editions and one-offs. The model was also the basis for last year’s ultra-popular hybrid Countach reboot, the LPI 800-4.

The supercar’s successor has been spied on test runs near Lamborghini headquarters, according to Motor1.com. Not much is known about the brand’s next model, though a high-voltage warning sticker spotted on the prototypes all but confirms it will be powered by a hybrid-assisted V-12. The mystery model is expected to make its debut next year.