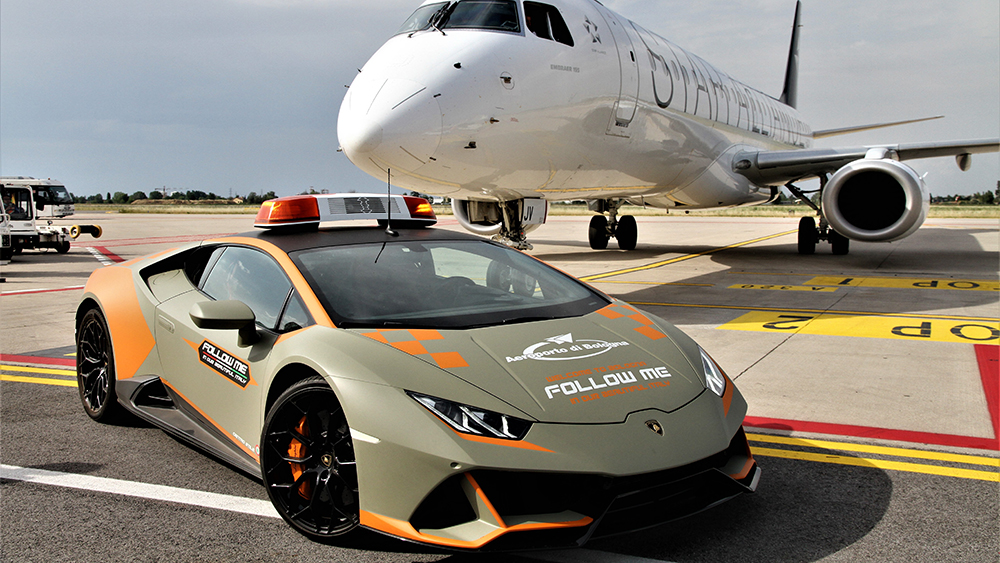 Jet setters just got one more reason to fly into Bologna. The four-wheeler leading respective planes to and from the runway is none other than a brand new Lamborghini Huracán Evo.

The new “Follow Me” supercar was designed to excite people passing through the Guglielmo Marconi International Airport, which happens to be a stone’s throw from the Raging Bull’s headquarters in the supercar mecca, Sant’Agata Bolognese. (Ferrari, Maserati and Pagani are all nearby in the famous Motor Valley.)

Created by the marque’s Centro Stile design department, the ultra-sexy chaperone is a far cry from the utilitarian vehicles typically found on the tarmac. Starting at $208,000, we imagine it’s quite a bit pricier, too.

The Follow Me Huracán sports an eye-catching livery to help it stand out at the busy airport, which welcomed more than 9 million passengers in 2019. It features a Verde Turbine Matt green exterior with checkered orange graphics that are similar to those found on run-of-the-mill ground support vehicles.

Elsewhere, the car is emblazoned with a welcome message, “Follow Me in Our Beautiful Country,” and the Italian flag. For safety purposes, it’s also fitted with flashing warning lights and a radio that’s connected to the airport control tower because, well, it has a job to do.

The Follow Me Lambo will be in service until January 2022.  Lamborghini

Under the hood, the Lambo retains its gutsy, naturally aspirated 5.2-liter V-10 engine that generates 640 horses. The speed machine is capable of hitting 201 mph at full tilt, though it likely won’t be reaching that velocity while carrying out its daily duties. A testament to the model’s engineering, Robb Report recently named its open-top, rear-wheel-drive twin, the Huracán EVO RWD Spyder, the best sports car and best convertible of the year.

On the taxiway until January 2022, the Follow Me Huracán is actually part of a long-standing partnership between the airport authorities and Lamborghini that spans some seven years. After all, who doesn’t want to touchdown in the boot-shaped country and be greeted by a true feat of Italian engineering?