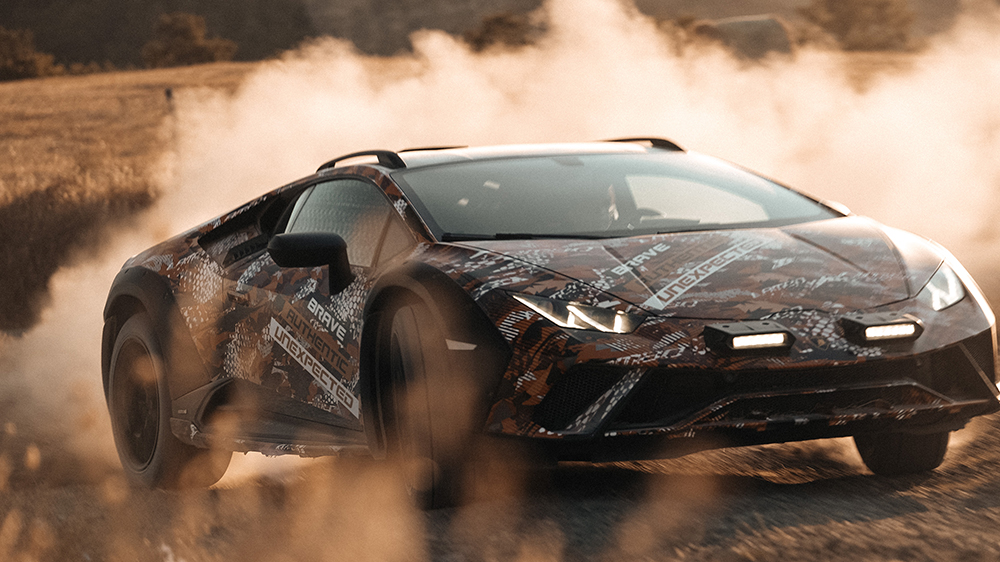 The Urus won’t be the only current Lamborghini you can take off road for much longer.

On Tuesday, the Raging Bull released official video of its first all-terrain production supercar, the Huracán Sterrato. We’re still waiting for the full specs, but the footage is a tantalizing preview of what the go-anywhere model will be able to do.

The clip, which is soundtracked by a pulsating techno beat, depicts the latest Huracán racing a mountain bike to an Italian villa. That may seem like an odd matchup, but it illustrates that the rugged two-door can go places other supercars would never dream of venturing. Although the race finishes in a dead heat, it’s hard not to be impressed by the flamboyant coupé, which doesn’t miss a beat even as it careens off road and onto the dirt. There are rumors that the Sterrato could be the final Huracán. If so, what a way to say goodbye.

While the video is definitely a teaser, it does give us a much better idea of what to expect from a variant enthusiasts have been clamoring for since it debuted as a concept in 2019. Although it wears a rally-style livery that makes it hard to make out body details, you can see all the Sterrato’s new rugged add-ons. These include protective cladding, wider fenders, a roof rack and front-mounted rectangular fog lamps. It’s also been raised, allowing you to drive over rough and uneven terrain without a second thought. Try that in any other supercar and you’ll have to call a tow truck.

Lamborghini has yet to say what kind of powertrain will be in the Sterrato, but the scream emanating from the vehicle in the video suggests it will be the same 5.2-liter V-10 found in the rest of the range, likely paired to a seven-speed dual-clutch transmission. We’re also still waiting to find out if the car will have an all-wheel-drive system. Lamborghini is touting the car’s versatility, so maybe it will come equipped with a system that lets you toggle between two- and four-wheel-drive.

Luckily, we shouldn’t have to wait much longer to find out. The Huracán Sterrato is all but certain to be one of three new models that Lamborghini launches between now and the end of the year. If some reports to be believed, it could arrive just in time for Christmas.

Click here to see all the photos of the Lamborghini Huracán Sterrato.