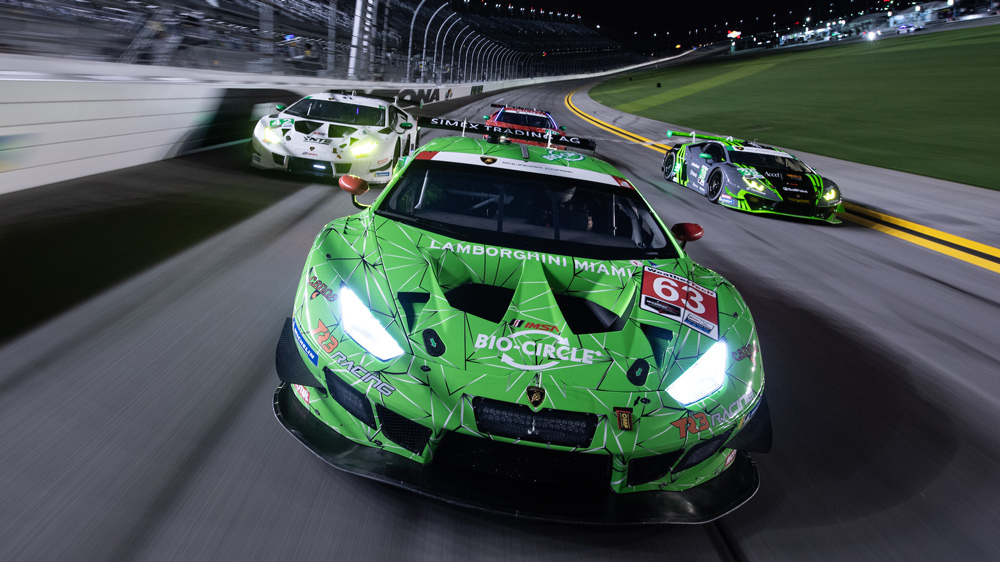 With the usually sun-kissed Atlantic coast of Florida averaging an air temperature of only 30.5 degrees Fahrenheit, the first 24-hour race at Daytona International Speedway was held on February 5 and 6, 1966. Taking the checkered flag was the team of Ken Miles and Lloyd Ruby, in a Ford GT40 Mk. II, under the Shelby-American banner. The victory was a precursor to what Miles and the GT40 would do a little more than four months later, shocking the world with Ford’s domination over Europe’s heaviest hitters at that year’s 24 Hours of Le Mans.

Today, in a matter of hours and under similarly frigid (at least for Florida) conditions, the 2022 edition of the Rolex 24 at Daytona will commence with 230 drivers alternating through 61 cars, and all vying for their own motorsport immortality. Among the over 50 teams campaigning in the IMSA WeatherTech SportsCar Championship series, of which Daytona starts off the season, is TR3 Racing. Formed by three brothers, the Miami-based outfit is, at least here, the unofficial factory team of Automobili Lamborghini.

Members of the TR3 Racing crew tend to the Huracán GT3 Evo set to compete in the GTD Pro class at Daytona.  Photo: Courtesy of Automobili Lamborghini S.p.A.

“We were kind of capped where we were, and felt we were very limited with what our potential growth could have been in the future,” says Arthur Romanelli, one of the team’s co-founders. “Last year, we saw a great opportunity with Lamborghini and have been able to achieve in one year what we were not able to do in the previous four or five.”

For this contest, TR3 is entering a pair of the Raging Bull marque’s Huracán GT3 Evo race cars in two of the five classes that comprise the field: the GT Daytona Pro (professional drivers with factory backing) and the GT Daytona (more of a customer-based pro-am pairing). The latter is one Lamborghini finished first in for three consecutive years, starting in 2018. As for the GT Daytona Pro class, TR3 earned pole position this week in qualifying.

But how important are races like the Rolex 24 at Daytona to high-profile OEMs, and how does such an investment translate to their customer base. Prior to the competition’s start, Giorgio Sanna, one of Lamborghini’s former test drivers and now the head of its Squadra Corse motorsport division, shared his thoughts on the topic—and more—with Robb Report. Also on hand near pit lane was TR3 racer Andrea Caldarelli, who won here in 2020, explaining his approach to the race and why this 3.56-mile circuit is so unique.

How did Lamborghini’s Squadra Corse motorsport division start, and why was the timing right?

Giorgio Sanna: Once Lamborghini was acquired by the Volkswagen Group in 1998, we spent the first 10 to 15 years looking to grow as a company, establishing a dealership network worldwide and increasing our product portfolio; it wasn’t the right time to get into motorsport because the company was not ready, the priorities were different. The idea of Squadra Corse began with our CEO, Mr. [Stephan] Winkelmann, and when the company decided to create it, I knew it was time for me to stop my career as a test driver and racer and take the lead in what has become a real department. In a few years, we have expanded from three people to a team of 50, because now we have something to say, something to show.

What are the benefits that Squadra Corse brings to Lamborghini?

GS: It provides the best opportunities to develop new technologies that could be linked to the street-legal [models] that we put on sale every year. From 2009 to 2013, before Squadra Corse existed, we sold 109 Gallardo Super Trofeo. From 2014 until today, we’ve produced and sold more than 400 race cars. I consider motorsport to still be the best bench with which to stress existing technologies and develop new ones—and it keeps the brand perspective where it needs to stay.

Roughly how long does it take for these racing advancements to reach the production cars?

GS: Normally, there’s no more than two to three years of difference before what we experience in motorsport has a direct link on the street cars. Whenever it’s possible to use our experience on a street-legal car, we do it.

How do you prepare for this weekend?

GS: Daytona is one of our most important events of the year, and we normally start preparing for it about four or five months before. We have to choose the customer teams, plan the technical support and prepare the cars. And there are many small details that have to be taken seriously because they make a difference. You need to predict and be ready for everything, because in a 24-hour race, everything can happen.

What are the specific challenges posed by this race?

GS: There are many. First, weather conditions can change quite quickly. Second is the traffic. There are many different cars at different speeds, and all are on a track layout that is unique in the world. It’s a track with banking, long straights and a technical infield where it’s difficult to overtake or be overtaken.

As a driver, Andrea, what is your favorite aspect of Daytona?

Andrea Caldarelli: My favorite part is the intensity of the race that comes in the last six hours. During the night, you are careful not to make any silly mistakes and stay away from traffic, but when you start to see the sun coming up, the adrenaline starts to pump up again. You know that it’s the last stretch and you have to give it all.

What element of Daytona do you find most difficult?

AC: Probably the hardest thing is that you have to keep focused, but, at the same time, keep motivated. When you’re in the corners, you get into a flow and your mind enters a zone. But there are a lot of straights, so you have time to think—and that’s the main enemy. This track makes it easy to get in the zone, even the banking is something nice, but those straights can be very bad if your brain starts thinking too much.

What is the most vital ingredient for teamwork in a race like this?

AC: I think trust and respect are the base, and key to a successful endurance team. And that’s not always easy to find; you can’t buy it. It’s important that everyone knows we are in that place, at that moment, for the same goal. You also have to be humble enough to know that mistakes can happen to anybody. But that’s not easy, and it’s not easy to find a group of drivers that have the same mindset.

How do you mentally prepare for an endurance race and manage to stay sharp?

AC: The way I approach an endurance race is to discuss with the engineers and my teammates which [driving] stints I should do and when to do those stints. I view those as races in the race. And when I jump out of the car, I try to completely switch off with a movie or PlayStation. I also manage to sleep. If I can get three to four hours, it’s good.

In your opinion, what is the difference between racing in the US and, say, Europe?

AC: There are big differences, to be honest. I think that in the States there are more old-school tracks where you really need to commit. If you make a mistake, you crash. Also, In Europe, there are so many different race series—from open-wheel and GT to prototypes and Formula 1—that each team has to be adaptive in case they lose a sponsor and have to switch to doing something else. In the US, teams seem to have a long history in one category and are specialized in that category. Because of this, the US has a strong fan base for teams, while in Europe, they follow more the driver.

Originally, Ferruccio Lamborghini didn’t want his company involved in motorsport. How do you think he would view Squadra Corse today?

GS: Ferruccio was born a businessman, not a racer, but he was a passionate person who loved the emotion that motorsport could generate. I think he would be very proud.