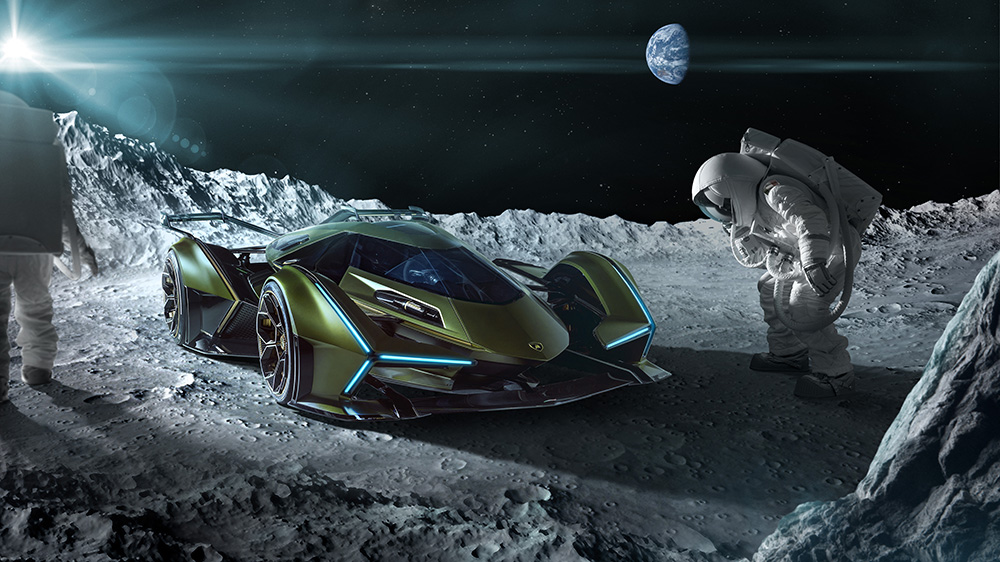 Just last week we were bemoaning the fact that most concept cars are little more than one-offs meant for show. That may be true of Lamborghini’s latest concept, but the automaker wants to give you the chance to drive it—at least virtually.

Lamborghini seems to have gone all out with the Lambo V12 Vision GT concept, perhaps because the only place to see it in action—or drive it—will be the popular Gran Turismo Sport video game. The single-seat hypercar, which was unveiled during last weekend’s 2019 FIA Certified Gran Turismo Championships, is basically a jet on wheels. It even requiring drivers, or at least their avatars, to enter from the front, just like a fighter pilot.

As with most concepts, the vehicle’s design is truly wild, even by Lamborghini’s flamboyant standards. It’s not entirely because of the brand’s renderings—which depict the concept being circled by an astronaut on the moon—that the hypercar looks like something from outer space. Designed with aerodynamics in mind, its elongated cockpit is the focal point of the body, while detached angular fenders, massive rear wing and six exhaust pipes give the car all manner of out-of-this-world attitude. The driver is so far forward inside the cockpit that all the normal dash readings will be projected on the inside of the windshield.

Less otherworldly but still plenty impressive is the car’s powertrain, which is the same one featured in this summer’s Sián hybrid supercar. That hybrid engine set-up, consisting of a 6.5-liter V12 engine and an additional electric motor, combines to output a brutish 819 hp. Lamborghini didn’t release any other performance figures, but expect its 0-to-60 mph time to be in the neighborhood or even fasters than the Sián’s 2.8 seconds.

Lamborghini chairman and CEO Stefano Domenicali said that the decision to debut the car in Gran Turismo was made to help the automaker reach a new generation of drivers. “Lamborghini is a very young brand, and this is why we are here today to present our newest virtual vision in the form of a real model, with a highly futuristic and cool design to be enjoyed by the young generation of racing game and super sports car enthusiasts,” he said in a release.

The latest entry in the six-year-old Vision Gran Turismo project, the Lambo V12 Vision GT will make its debut in the popular Playstation 4 game next spring. It follows in the footsteps of other impressive virtual cars, including the Jaguar Vision Gran Turismo Coupé, which is set to debut before the end of the month.

Check out more images of the Lambo V12 GT concept below: