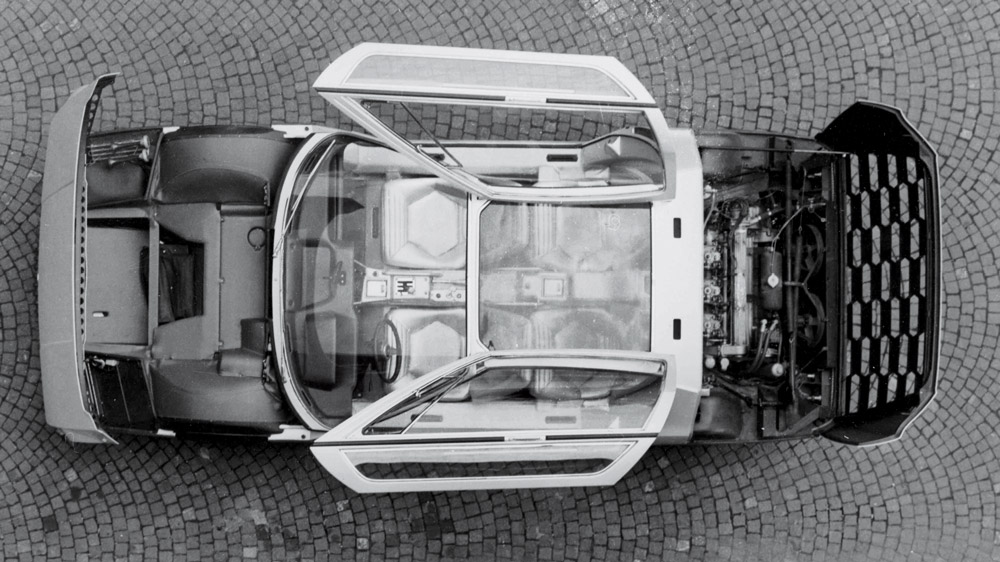 Nothing says “Space Age” like show cars from the 1960s. It was an era when Italian style was a driving force, from four-wheelers to fashion, an epoch unequalled for its invention, and automotive designers had free rein to envision anything that could be manufactured. The clouds that were gathering over America had not yet darkened the sky with the government’s draconian automotive impact regulations, lighting and bumper standards that would soon decimate creative license beginning with the 1968 model year. By contrast, in Europe, the coast was clear. It was an age when the Italians had all the fun.

Meanwhile, Ferruccio Lamborghini’s preferred body builder, Carrozzeria Touring of Milan, had gone into receivership, and Lamborghini’s first model, the traditionally-styled 400 GT, would soon to become a thing of the past. Besides, that car was too conservative—not nearly outré enough a statement for the up-and-coming carmaker. Nuccio Bertone came to the rescue. The biggest competitor of Pininfarina—designer of all things Ferraris—Carrozzeria Bertone did not have a world-class marque with which to associate itself, and Lamborghini’s proposed mid-engine marvel, the Miura, was just the ticket. Probably no Italian design studio of the period authored more groundbreaking creations than Carrozzeria Bertone, whose brilliant young stylist, Marcello Gandini, left his imprint on Lamborghini’s nascent Miura and years later, the outrageous Countach. Yet, one show car eclipsed every other design with its science-fiction fantasy, cementing Lamborghini’s stature as the world’s most forward-thinking car company.

That car was the Marzal, a one-off concept shown at the Geneva Motor Show in March 1967. The silver four-seater was based on a Miura chassis, and featured a transverse, rear-mounted inline-6 that was essentially half of a Lamborghini V12 engine. Lamborghini had visions of using the smaller engine in a less expensive car aimed at the Porsche 911 market, though it was underpowered in relation to the mighty V12 used in the front-engine GTs and the mid-engine Miura. Nonetheless, the Marzal was an exercise in modernity, featuring huge, glass gullwing doors, a silver leather interior and design details based on hexagonal shapes—from headlights to metal grilles—that are still referenced today in current Lamborghini models. The Marzal inspired Gandini’s design for the Espada, Lamborghini’s remarkable GT that began production in 1968.

In 2011, Bertone liquidated some of its irreplaceable show cars—including the Marzal—in an auction held by RM Sothebys at Villa d’Este. The car hammered for €1,512,000 including commission, and went into a specialized Lamborghini collection of a noted Swiss enthusiast.

I remember seeing the Marzal at the Los Angeles’ Auto Expo, circa 1968, on a twirling stage surrounded by young women wearing checkered-flag miniskirts, halter tops, and silver go-go boots. To say that the entire scene made an impression on a then-13-year-old car enthusiast is an understatement. And certainly, few cars have stood the test of time so well as has Lamborghini’s one-off. It’s a testament to the enduring power of daring invention and uncompromising design that the Marzal remains as powerful today as when it shattered conventions 50 years ago.