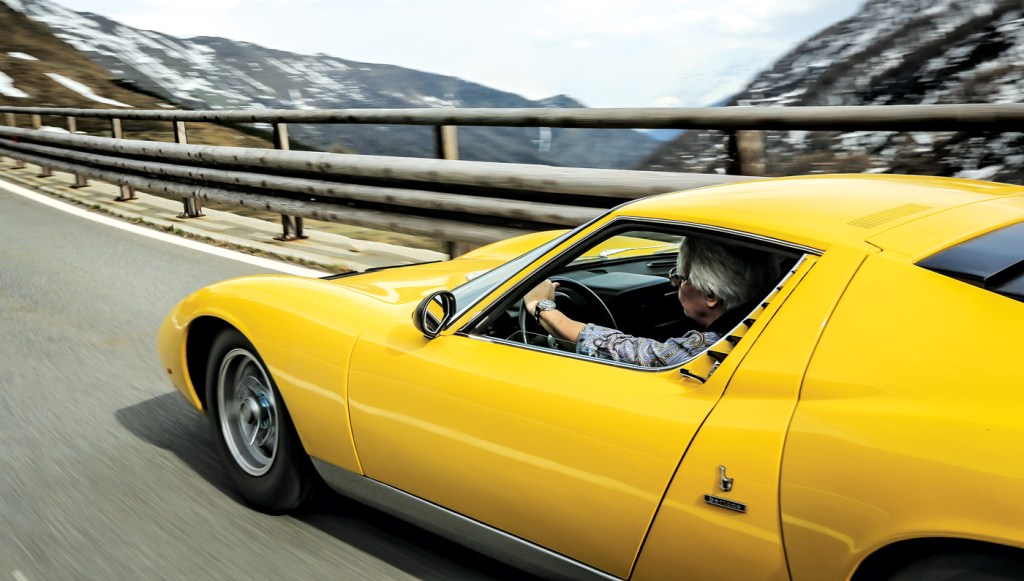 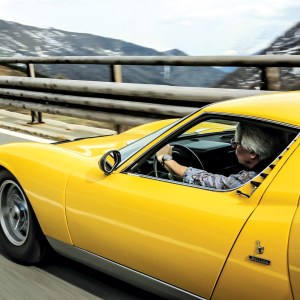 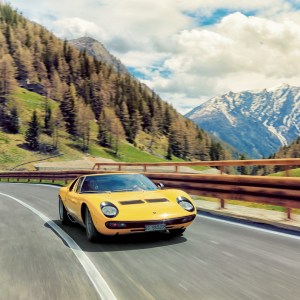 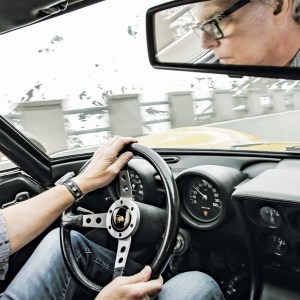 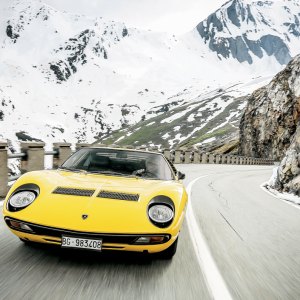 Lamborghini celebrates 50 years of the Miura by re-creating a drive that starts a film and ends abruptly.

The 1969 British caper film The Italian Job opens with a soon-to-be-dead gangster driving his Lamborghini Miura through the Italian Alps. Shot from a helicopter, from the road, and from behind the wheel, the orange sports car snakes its way along snow-lined mountain roads and blasts up the dramatic Gran San Bernardo pass. Our ill-fated driver alternates between taking cool drags from his cigarette and stirring the Miura’s gated shifter before he enters a pitch-dark tunnel. The screen goes black, and then we hear an explosion and see flames as the car slams into a bulldozer parked at the far end of the tunnel. Emerging from the tunnel with the Miura’s smoldering remains propped up over its blade, the bulldozer dumps the wreck and its occupant over a cliff and into a river below while an assembly of other gangsters watch from the side of the road.

Earlier this year, nearly a half century after the car’s apparent demise, that same orange P400 was parked outside the quaint Hotel Beau Sejour in the northern Italian village of Étroubles, about 10 miles from the Swiss border. The car didn’t have a scratch on it. A Miura can be worth a seven-figure sum today, but even in 1969 the model was sufficiently rare and coveted for the filmmakers to craftily substitute a previously totaled example as an after-crash stand-in.

The P400 was parked alongside two other Miuras, both owned by Lamborghini: a gold P400 S and a yellow P400 SV. We had driven here in a sextet of Aventadors from the automaker’s factory in Sant’Agata Bolognese, about 240 miles to the south, and to kick off the Miura’s 50th-anniversary celebration, we were going to re-create all but the incendiary element of The Italian Job’s opening sequence. ANAS (Azienda Nazionale Autonoma delle Strade), the agency that manages Italian roadways, had closed the mountain pass to other traffic to allow us wide-open runs with photographers and video crews. But more special than the planned drive was the presence beforehand (in the town of Saint-Vincent) of three of the men responsible for the Miura’s existence.

The reunion of Giampaolo Dallara, Paolo Stanzani, and Marcello Gandini was an unrepeatable event, an opportunity to hear their stories over dinner and at a morning press conference (and through interpreters) and get a sense that, despite the earth-shattering impact the Miura had when it came on the scene in 1966, the car’s genesis was just another day’s work doing a different sort of Italian job.

Dallara was Lamborghini’s technical director from the company’s founding in 1963 until 1969. Stanzani was an assistant to Dallara and by 1967 had become the factory’s general manager. Both are 80 this year. Gandini, who joined the styling house Bertone in 1965 and soon thereafter designed the Miura, is 78. Together with factory test driver Bob Wallace, who died in 2013 at age 74, they accomplished what could never be done today because of bureaucratic regulations, focus groups, and the ponderous machinations of corporate boards. They had only one man to please: Ferruccio Lamborghini, an industrialist with a thriving tractor business who was eager to establish his new automobile marque’s dominance with GT cars produced in a state-of-the-art factory he had built from scratch in 1963.

Inspired by mid-engine competition cars such as the Ford GT40, Dallara, Stanzani, and Wallace proposed to their boss a road-going sports car unlike any previously conceived models. It would have a mid-engine layout for perfect balance and be powered by Lamborghini’s mighty V-12, which Giotto Bizzarrini designed in 1963 for the 350 GT. To keep the new car’s length reasonable, the long engine would be turned sideways, as the Mini Cooper’s was, with the transmission running parallel to the crankcase.

Such a design represented a serious feat of engineering and metal casting, but Lamborghini accomplished it in time to present a rolling chassis called P400 (P for posteriore, referencing the position of the engine, and 400 for its 4-liter displacement) at the 1965 Turin Motor Show, where it attracted huge crowds. The engine, worthy of Michelangelo, was adorned with four bright Weber carburetors and shoehorned into a chassis, lightened with Swiss-cheese holes, that awaited a body designed as brilliantly as the engine.

The body would come from Nuccio Bertone’s firm. After meeting Fer­ruccio Lamborghini for the first time at the Turin show, he quickly struck a deal to design and build it. The styling assignment went to young Gandini, whose initial concept was a stroke of genius that underwent little compromise before the first prototype was shown at the Geneva International Motor Show in March 1966.

Lamborghini named the car Miura after a formidable type of fighting bull bred by Eduardo Miura Fernández in Seville, Spain. Gandini even created a clever logo script, adding horns to the M and a tail to the A. To say the Miura was a sensation is an understatement. Lamborghini assumed the company might sell only 50 of these “halo” cars, but it ended up building about 760 from the spring of 1966 until production ended in January 1973.

Miura taxonomy is complicated because the model underwent many changes—mechanical and cosmetic—during its production run. Broadly, the P400 evolved into the P400 S by 1969, with a power increase from 350 to 370 hp and structural improvements. The P400 SV, introduced in early 1971, generated 385 hp and featured an improved rear suspension, wider rear fenders and wheels, revised pop-up headlights, and, for the final 96 examples, split-sump lubrication. This design separated the engine and transmission cases, preventing gear fragments caused by missed shifts from destroying the engine bearings.

Lamborghini reportedly produced 275 examples of the P400, 338 of the P400 S, and 150 of the P400 SV. Five of the SVs and one new chassis were built to SVJ specs, which incorporated styling elements from Wallace’s one-off racing test mule called the Jota.

But just as Dallara, Stanzani, and Wallace were perfecting the Miura SV, Bertone debuted the LP500 Countach prototype—featuring another brilliant Gandini design—and the Miura was suddenly relegated to history. In hindsight, the Miura’s creators say there were years of life and customer orders left in the SV, but progress demanded that Lamborghini, maker of trendsetting supercars, once again define the future with an even more radical design.

The Miura is to historic sports cars what Everest is to mountains. It also represents the pinnacle of automotive beauty, not just for its era but perhaps for all time. And while such proclamations may be debated, no one can deny that driving a Miura offers a thrill that few other cars can equal.

As you approach the Miura, you realize how small, low, and delicate it is. Its featherweight doors open with a tiny latch, and as you settle into the narrow bucket seat, you can imagine that this intimate interior, when new, felt as modern as a space capsule. The Miura holds you in a close embrace and a slightly awkward position, with your arms outstretched and your legs splayed to fit in the shallow foot well. The leather-wrapped steering wheel (wood-rimmed on the early P400 models), big tach and speedo pods, close-set pedals, and imposing chrome shift gate suggest that a visceral driving experience is in store. The headrest is just millimeters from a glass window that separates the cabin from the four fuel- and air-gulping carburetors and the rest of the engine.

Turn the key and the 4-liter, 4-​cam engine barks to life, with fine mechanical noises coming from valves, gears, and chains. The exhaust note is stentorian and mellifluous, unlike Ferrari’s edgy wail. The engine produces peak horsepower at 7,850 rpm and revs freely to redline, though out of courtesy to the yellow SV’s freshly rebuilt motor, we exercised some restraint.

The road through the Gran San Bernardo is narrow but well paved. Its tight hairpins alternate with straight shots, where the Miura flexed its V-12. The car’s torque band is broad; the engine is willing to pull from 1,500 rpm in top gear, meaning that your right foot can do most of the work. But the synchronized 5-speed gearbox is pure entertainment. With the precision of a rifle bolt, the Miura’s hardened-steel shift rod glided into the slotted gate. The sound of matching revs and the exhaust’s percussion repeated off the near-vertical walls of snow on either side of the road.

The Miura is pure muscle—no fat—and driving it reminds you how different this elemental, lightweight car (2,900 pounds) is from the Aventador and its other complicated descendants. The Aventador has nearly twice the power, but like every other modern supercar, it feels large and heavy compared to the Miura.

The Aventador is, of course, far more evolved. The distance between it and the Miura is about the distance between the Miura and another machine of its day, a Lamborghini tractor. But the Miura is a timeless expression of aesthetic perfection that also affords a connection between driver and machine that does not exist with today’s automobiles. As Dallara observed at the press conference, “We were lucky enough to have a magic style that is still magic today.”  Lamborghini, (lamborghini.com)