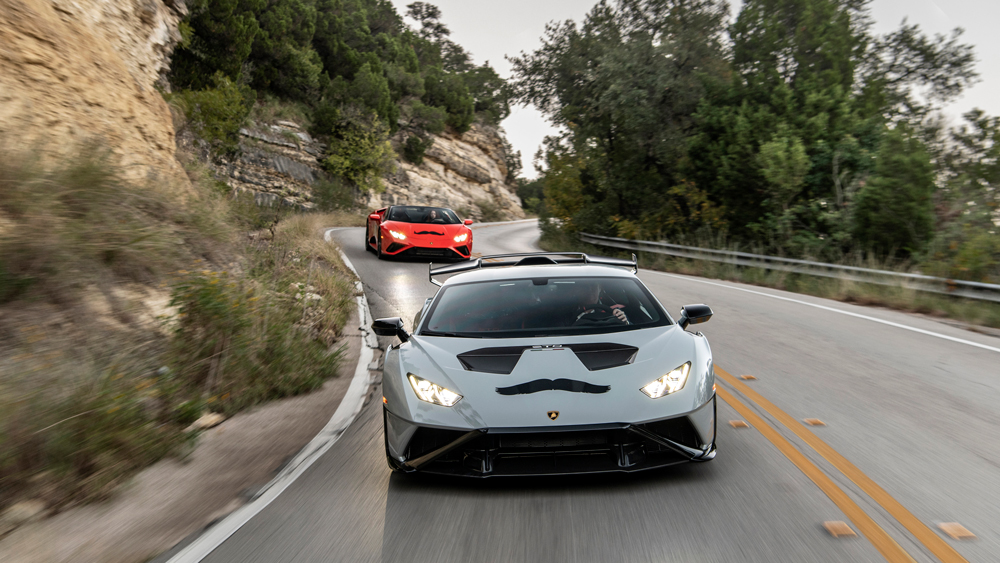 If you see an unusually high number of moustaches this month, thank the charity Movember, founded to support men’s health initiatives. To this end, the nonprofit organization has partnered with supercar manufacturer Automobili Lamborghini to send fundraising and awareness into overdrive, benefitting men of all ages.

The Raging Bull has been quite, well, bullish in representing Movember, embellishing various models with prominent decal moustaches and sending them out on Bull Run parades around the world. And the partnership has grown in the second year of collaboration, with the main US rally—in Austin, Tex.—seeing double the number of participating vehicles compared to last year.

One of the stars of the 2022 rally was the brand-new Huracán Tecnica, an example of which we were piloting. Its 5.3-liter naturally aspirated V-10—delivering 631 hp and 417 ft lbs of torque—growled throatily along the route in Texas Hill Country as onlookers snapped photos and captured video. A poster-worthy 1988 Countach held its own in line, along with a blacked-out Huracán and navy Aventador S, with several more coupes, convertibles and a few Urus SUVs added to the mix for good measure.

In 2021, nearly 1,500 global Lamborghini owners converged to proclaim allegiance with Movember, kicking off the first year of the partnership with a roar. In the US alone, 600 cars from 92 dealerships in 22 states participated, and the UK hosted the second-largest showing with 200 supercars.

Founded by two Australian friends, Movember originated to raise money for research to combat prostate cancer. That was 19 years ago, and the Movember Foundation has raised $1.3 billion since, expanding its focus to research into testicular cancer as well as support for mental health. Lamborghini reached out to Movember in 2020 because some men inside the marque had been sporting moustaches for the cause. Lamborghini asked Movember leadership if they were interested in teaming up, and a relationship was forged.

Mark Hedstrom, the executive director of Movember in the US, told Robb Report that partnering with Lamborghini, historically considered a very masculine brand, “makes sense”. It’s the only luxury brand working with the foundation, and the timing is great for Lamborghini as well: The automaker had a banner year in 2021, recording the best sales in its history with 8,405 cars delivered worldwide. Stateside, sales were up a healthy 14 percent, tying with the Asia Pacific region. And now with Movember, Lamborghini is helping to keep a large segment of its growing customer base on the road to wellness.

Click here to see more photos from the partnership between Lamborghini and Movember.