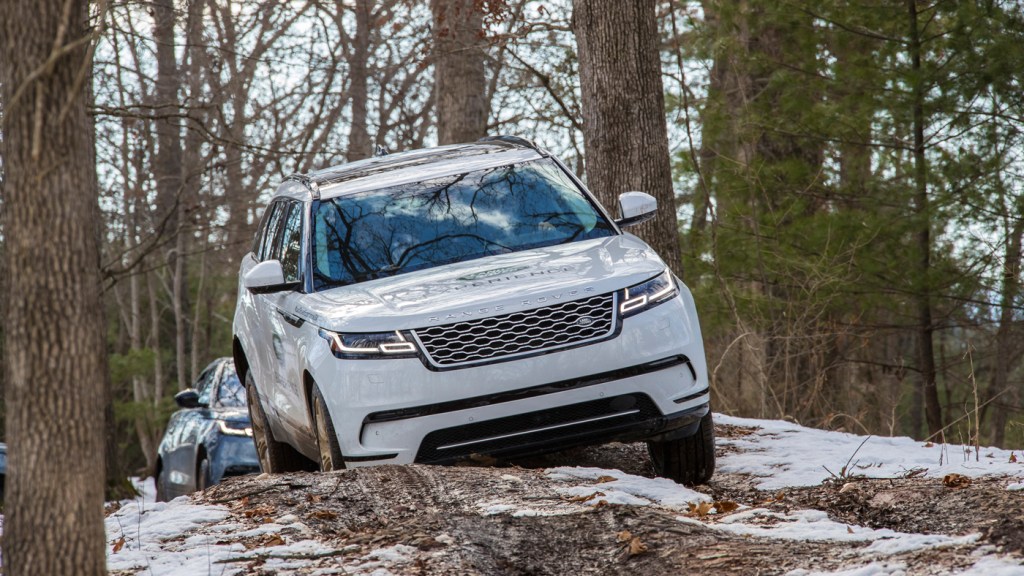 Land Rover’s fundamental brand promise is off-road excellence. The original Defender is practically the official vehicle of Africa’s untamed parts. So it is with some understandable skepticism that Land Rover fans might view recent models like the convertible Evoque cute-ute, whose off-road credibility seems suspect. But through the magic of modern technology and decades of off-road experience, Land Rover is able to imbue even slick-looking, suburban machines with authentic all-terrain capability.

That’s what we found while driving the 2018 Range Rover Velar through snow-dusted, muddy forest trails at Biltmore Estate in Asheville, N.C. This is one of four North American sites for the Land Rover Experience, where anyone can sign up to spend a day learning off-road driving in one of the marque’s adventure vehicles. California, Vermont and Quebec are the other three locations.

The Velar is built on an aluminum body structure shared with the curve-loving Jaguar F-Pace crossover. It is bolstered by an array of traction-enhancing technologies such as Terrain Response 2, an active locking rear differential, All-Terrain Progress Control, Low Traction Launch, Hill Descent Control, and Gradient Release Control. An air suspension system contributes to the Velar’s best-of-both-worlds capabilities by raising the vehicle when mode settings suggest some extra ground clearance would be helpful, and lowering it for cruising highways on the way to the next backcountry excursion.

We set out from The Inn on Biltmore Estate at 8 am on a 25-degree (Fahrenheit) morning in a trio of $69,600 Velars. Each example came with a 380 hp, supercharged 3-liter V6 engine, as well as a Land Rover Experience instructor riding shotgun to provide direction. Snow on top of mud suggested that some properly gnarly tires would be in order for the day, but the instructors explained that they always demonstrate the Land Rovers exactly as delivered by the dealer, so we rolled on highway-centric all-season rubber rather than true winter, snow or mud tires.

In most places, the winding trail probably looked tougher than it was, but it was peppered with periodic obstacles, like ice-slicked logs to crawl over. Weaving between trees on the narrow trail showed the value of the Velar’s svelte width. Periodically we’d attack true obstacles, such as moguls and holes that loft a front wheel in the air. This calls for a patient approach, creeping forward gently so the airborne wheel doesn’t crash violently back to earth.

As we clawed up steep, rutted hills, the Velar’s computer diligently locked differentials and applied traction-control brakes (accompanied by the crunching and groaning sounds of important machinery at work!) as needed to route power to the wheels that have grip. Even with the street-oriented tires, the Velar always found traction.

It is a reasonable metaphor for the marque’s mission as an off-road specialist: Land Rover, still finding traction to move forward in an increasingly sanitized, urbanized world.