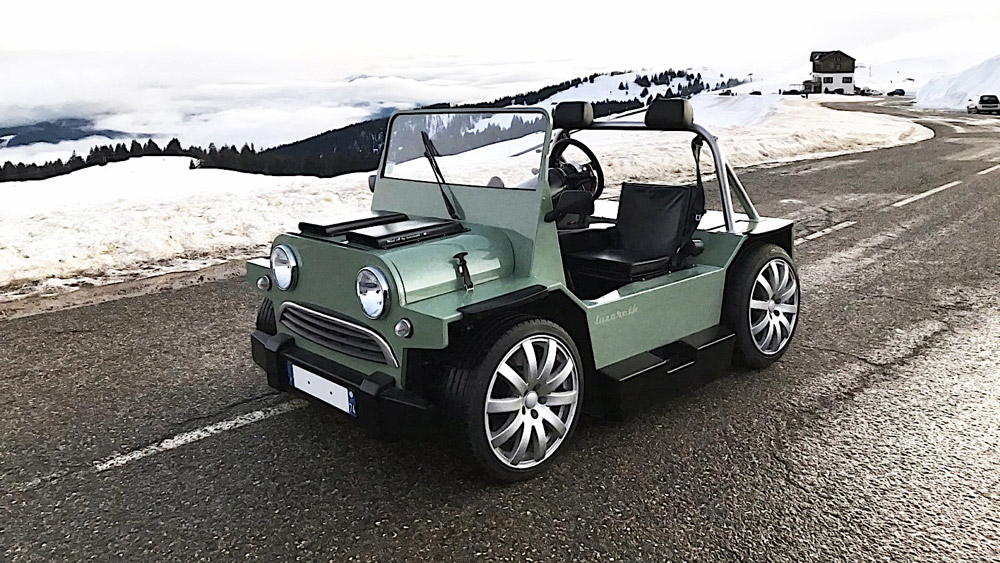 Did you hear about the Mini Moke with a 454 hp Maserati V-8 engine crammed under its teeny hood? It’s not a hoax. This is the wild, some would say “bonkers” creation of French customizer Ludovic Lazareth, whose Annecy-based Lazareth Auto-Moto has a habit of building outrageous motorized devices.

Did we mention his four-wheeled flying motorcycle with aviation-grade gas turbines on each wheel? Or his $220,000, Maserati V-8–powered LM847 motorcycles? Then there’s the amphibious version of the oh-so-British Moke that Lazareth has been building since 2017. Powered by a 400 cc motorcycle engine, it has a top speed of 55 mph on land, with a more-leisurely 3 mph on the water. He produces around 10 per year, each priced from $27,000.

For Mr. Lazareth’s latest, he took one of the bare-aluminum Moke “Amphibie” bodies and a Maserati V-8 and was somehow able to shoehorn the thankfully light and compact, Ferrari-built 4.7-liter V-8, usually seen in Maserati’s swoopy GranTurismo coupe and convertible, into the Moke‘s stubby snout. He then paired that with Maserati’s six-speed Cambiocorsa transmission and steering column.

What must have made it all even more challenging was that Lazareth’s Moke is a short-wheelbase, two-seat homage to the original four-seat version that was built between 1964 and 1968.

See this Frankenstein-esque creation in the metal and you can’t help but grin. Rolling on towering 17-inch rims—the original Moke had 10-inch ones—the vehicle looks like an oversized roller skate, or go-kart on steroids.

Considering that the entire package tips the scales at a mere 1,870 pounds and produces 383 ft lbs of torque channeled to the rear wheels, performance has to be insane. Sadly, Lazareth isn’t disclosing any acceleration data just yet.

What the Mini V8 M, as Lazareth Auto-Moto titles it, does share with the original Moke is the austerity of its cabin. Two, thinly padded seats straddle a huge transmission tunnel. The only instrumentation is a teeny speedometer.

The lack of pretty much any safety feature means that this little monster is far from street legal. That said, we can think of a number of enthusiasts who would love to thrash it around their private estates, or showcase it at their local Cars & Coffee.

The only instrumentation is a speedometer.  Photo: Courtesy of Lazareth Auto-Moto.

While the Lazareth Auto-Moto website talks of “price on request,” we’re told on good authority that the conversation would start at around $130,000. One thing’s for sure—it would make one heck of a golf cart.