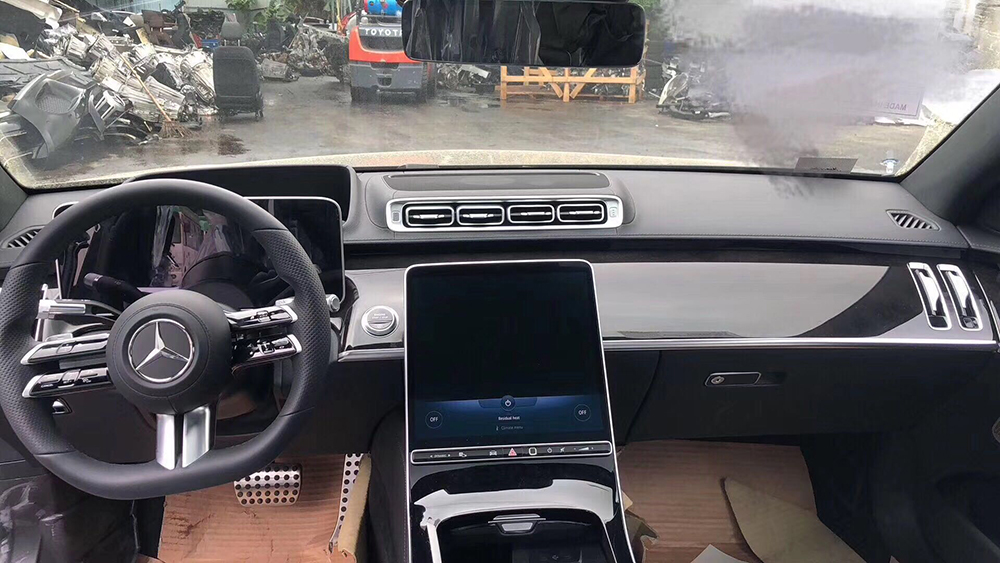 At the risk of sounding sacrilegious, the most exciting thing about the new Mercedes S-class may actually be its interior. And before we’re condemned to automotive hell, hear us out.

The photos of the next-gen Benz, which were leaked on the Instagram account @CocheSpias on Tuesday, show both the exterior and interior of the new flagship sedan, but it’s the latter that steals the show. The German marque appears to have taken a leaf out of Tesla’s design book and fitted a sizeable touch-screen display vertically on the center stack, as well as one behind the steering wheel and two on the back of the front headrests.

While it’s no full-dash infotainment system, like the 48-inch design that recently appeared in the M-Byte SUV, the decidedly futuristic design sees a drastic departure from Mercedes-Benz’s typical approach, which is rooted in the understated and more often has main displays that run horizontally.

The S-class, which is expected to go by the nickname W223, also appears to be sporting the same Supersport steering-wheel that graces the updated E-class. This ingenious piece of tech has touch-sensitive capabilities to register when the driver’s hands are on the wheel. This, coupled with the advanced driver-assistance system and modern dash, will help the car achieve its touted Level 3 autonomy.

When it comes to the exterior, things are a little more familiar. The S-class is replete with the marque’s signature sleek lines, and the model in the leaked images features an elegant jet-black paint job. There are no clues as to what’s under the hood, but after driving the hotly anticipated Vision EQS earlier this year, we expect there may be a hybrid or electric option.

So, when can we see it in the flesh? A Mercedes spokesperson confirmed to Car and Driver that the new S-class will debut later this year, which means it should arrive in the US sometime in 2021. You know what they say, patience is a virtue.