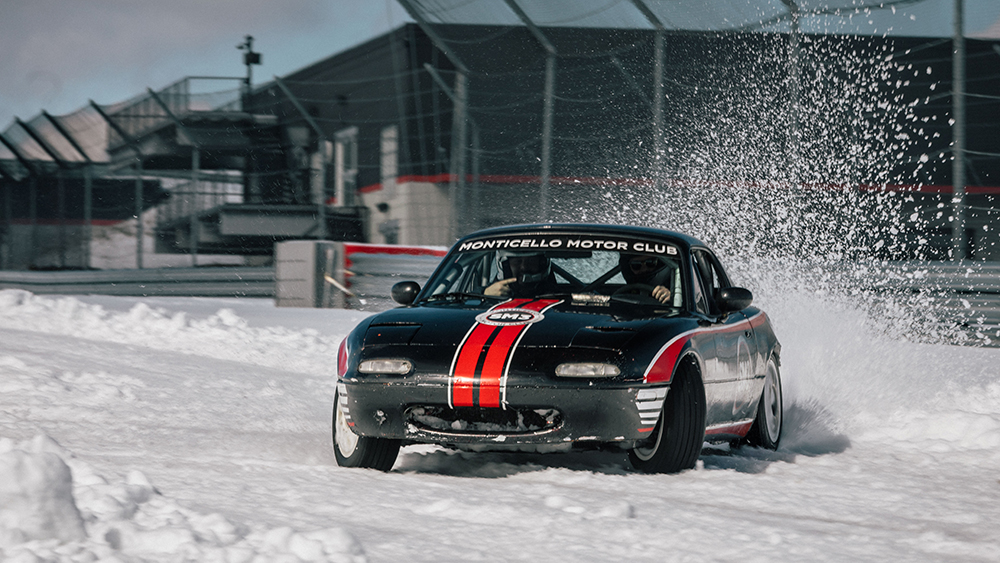 “You stuffed it good,” Chris Duplessis laughed while giving the Mazda Miata one final, futile push. “The wheel’s too packed with snow to even turn.” I wedged my large frame through the narrow opening in the roll cage and ineloquently fell into the snowbank I had just driven us smack into at about 40 miles an hour. The Miata’s front end was caked with wet, spring snow, freshly fallen the day prior, and I got to work scooping it out with my hands.

Yanking one giant chunk out saw a large piece of the front fascia come with it. My heart sank. “Did I, uh, break the car,” I sheepishly asked Duplessis as he inspected the damage. “Nah, there’s already a zip tie here. You just re-broke it,” he chuckled. When I started my apology, he held up his hands. “You’re learning. Shit happens,” he smiled. “You were doing good… right up until you weren’t.” A quick tow out and we were back on track, figuratively and literally.

When I floated the idea of doing a how to rally story by Duplessis, track director at Monticello Motor Club in upstate New York, there was no hesitation. “Come up the morning after the next big snow storm,” he said. A week or so later, a pristinely snow-covered course awaited, along with a haggard but rock solid ’90s NA MX-5 Miata with Michelin X-Ice stud-less snow tires, a race cage, and a welded differential. That last bit’s important because it effectively gives you a solid rear axle, spinning the wheels at the same speed, thereby causing the inner wheel to lose traction, which makes oversteer easier. And we wanted all of the oversteer.

At first, the snow got the better of Sean Evans as he learned to rally.  Photo: Chris Szczypala/Monticello Motor Club

“Conditions are perfect,” Duplessis grinned right before we started. “The sun’s softening the snow, but there’s enough of a base to get us sliding.” After starting out as a rally driver in 2006, Duplessis won the Rally America championship the following year. Three more national championships followed in short order, as did innumerable regional championships, and several rounds in the World Rally Championship series. He’s the ideal right-seat coach not just because of that impressive résumé, but because of his effusively sunny disposition. If this dude’s ever having a bad day, you’d never know it from his perpetual smile. And he’s always encouraging you to “send it.”

I’d driven the 4.1-mile course at Monticello plenty of times, but never when the track was buried under snow. To be fast on dry pavement, smooth and steady inputs on the wheel and throttle are necessities, as are knowing your brake zones and when you should turn in. To be fast in the snow, the same principles hold true except every action you take is exaggerated and magnified. “Do everything earlier and even smoother,” Duplessis shouted as I tried to hammer into the first corner and subsequently found the Miata spinning out of control. “You have to plan ahead, and don’t be jerky on the wheel because the car’s attitude changes very quickly in the snow. Also the steering wheel is more of a suggestion.”

Getting into rhythm on the snowy track.  Photo: Chris Szczypala/Monticello Motor Club

Come again? “Steer with the throttle,” he explained. If you want to go to the right, turn the wheel a tiny bit, then do all the work with your feet. A little brake will load up the front with weight and help the car start to turn slightly, but you actually get the car to rotate by a heavy push on the gas pedal. With the rear wheels spinning, thanks to that locked differential, the car will pirouette. “A little gas will make the car do a lot more than adding a ton of wheel,” Duplessis said.

Easy in theory, however getting everything precisely right is anything but simple. Learning to rally or drive fast in the snow involves embracing the counterintuitive. You’ve got to ignore the nagging voice in your head that’s screaming for you to brake when you should be gassing it, or turning in very early. The best tool at your disposal? Patience. You’ve got to wait and wait, often past the point of comfort, because if you act too early, you’ll end up in trouble.

For example, coming down the back straight into a tight left-hander, my instinct was to brake early, turn the car and get on the throttle right away. That approach meant the car wasn’t carrying enough entry speed, nor was it on the right line. So when I went to add the gas to drift through the corner, the back end just snapped around in a circle instead of pushing us through. “Hang on this time. Go a little deeper,” Duplessis instructed. “When you turn, give a pause before the throttle to let the front end bite, and then go hard to the gas.” The first few times felt instinctively wrong, but it saw the Miata sailing through the corner at an exponentially faster clip.

It coalesces once you understand where your level of fear is and start to push on those boundaries. The faster you go, ironically, the easier it becomes. “The car doesn’t move or slide around until you’re going about 35 miles an hour,” Duplessis said, “which may not sound fast, but it is. You have to get to that speed to get the car moving around laterally, then you’ll start to understand how it’ll respond.” When you feel the car sliding, and it’s on the edge, the effects of applying more or less throttle are crystal clear. The same holds for the amount of steering. Duplessis must’ve shouted “Less steering!” so many times, I started to think it was my name.

Listen to the master, and your reward is speed. And feeling like you’re starting to grasp the basics. After five or so laps, we were smashing through an elongated turn called the mushroom cloud, starting to kick up some solid rooster tails. “That’s it, baby!” Duplessis yelled. “Let ‘er fly!”

Just when I felt like I understood the ideal entry speed, and amount of steering and throttle for any given corner, the track conditions would change. The spring sun was obliterating snow at a rapid pace, and where there was snow one lap before was now exposed pavement. My mental benchmarks were only valid for a lap or two before I had to reassess and rethink my approach. “Just like rallying, where the conditions change constantly,” Duplessis smirked.

Initially, I had a less-than-stellar idea of lifting off the throttle when I saw black patches approaching, and I’d try to straighten the wheels to keep the car from grabbing on the asphalt and snapping us around. The correct solution to any issue in these challenging conditions, Duplessis said, was more power and less steering. “If you keep the back wheels spinning, then the car will glide right over the asphalt.” Sure enough, with the throttle buried, the Miata would float over any crud and crowning tarmac.

It takes years of seat time to move from grasshopper to sensei, but after your first hour behind the wheel, you’ll be hooked enough to want to commit to that time frame. It’s properly addicting. But where should you start? Preferably in someone else’s car, and there are plenty of rally schools that will do precisely that. “If you want ice and snow, Bridgestone Winter Driving School in Steamboat Springs is by far the best,” said Duplessis. “You get a brand new Toyotas on great Bridgestones, the courses are awesome and the instructors are top notch.”

If you want loose surfaces—gravel and dirt—instead of snow and ice, if you’re on the East coast, you’ll want to head to Team O’Neil Rally School, where Duplessis spent years as an instructor. “O’Neil has the best facility in terms of stage roads and jumps, but if you want to do absolutely everything, you’ll want the six-day course,” Duplessis said. West coasters should head to DirtFish Rally School, located in Seattle. “It’s in an old log yard, and they actually filmed Twin Peaks there. The instructors are great and they’ve got all-wheel and rear-wheel drive Subarus that are perfect for the terrain.”

Anything in the middle of the country and you’ll want to head to Rally Ready Driving School in Texas. “I love this place so much we took our Monticello members there for the multi-day courses,” Duplessis shared. “It’s got UTVs and rally buggies and everything in the middle. Dave Carapetyan, the owner, is a really fantastic guy who loves rallying more than anyone in the world and he’ll cater to whatever you want.”

Before you book anything, you should probably be comfortable with a manual, as that’s what all the rally schools use. (Duplessis noted that any of the schools would also teach you how to drive stick, if need be.) And don’t hate on the smaller, seemingly underpowered cars, like the 130-horsepower Miata that Monticello loaned me. “You can learn more in a Miata than a brand new BMW M5 because it’s raw and you’re feeling it and you’re okay to screw it up,” he said before he flashed a toothy grin and nodded towards the cracked front of the Miata. “A $100,000 car crashes the same way as a $1,000 car. You know about the latter, right?”