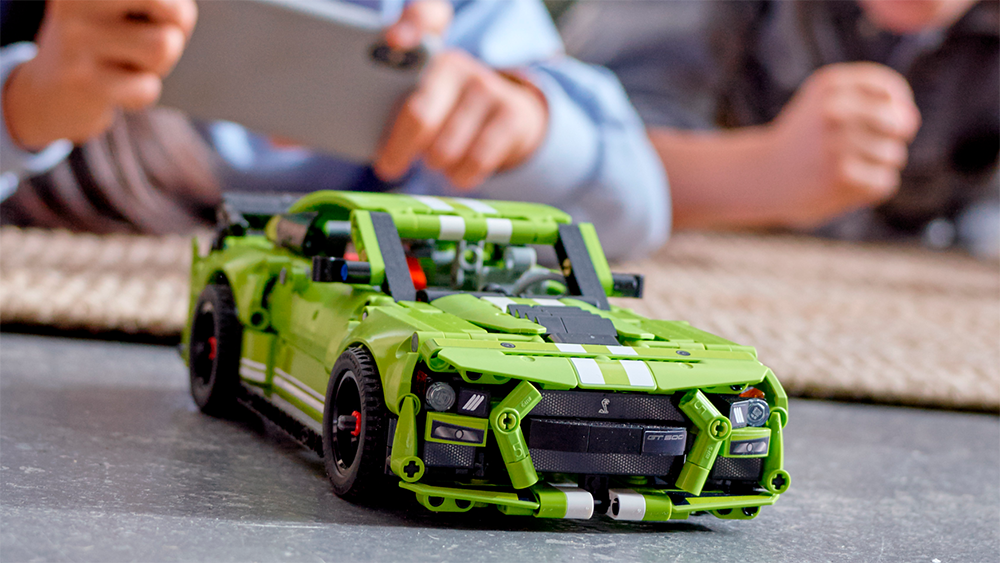 The centerpiece of any Mustang is the engine. As it turns out, this is just as true when the pony car takes model form.

Lego has just unveiled a detailed new model of the Ford Mustang Shelby GT500 featuring a working mill under the hood. The two pull-back motors propel the miniature pony forward like a real-life muscle car. On top of that, the model can be used with Lego’s AR app, which allows you to put it to the test on a virtual racetrack.

Racing prowess aside, the mini Mustang isn’t bad to look at, either. Comprising some 544 pieces, it features the same sleek lines and boxy silhouette as the original. Spanning 10.5 inches from tip to tail, it has been finished in a bright green hue and sports twin racing stripes in white on the body. The model also comes with a rear cover that keeps it nice and stable if you’d rather display it than play with it.

It is, of course, difficult to best the actual ‘Stang when it comes to power and panache. In fact, Carroll Shelby famously said the original Shelby GT500 was the first car he was “really proud of.” The newest model, which was unveiled in November last year, will be the mightiest Mustang to date and the most powerful street-legal car Ford has ever built. The supercharged 5.2-liter V-8, which is aptly called the Predator, can reportedly deliver a staggering 760 horses and 625 ft lbs of torque for blistering speed.

Lego’s model may not pack the grunt of the original, but anyone aged nine or over can build it themselves. That’s something that you certainly can’t say about a Ford. It’s cheaper and more readily available than the real four-wheeler, too, with a price tag of just $61. The limited-edition 2022 Shelby GT500, meanwhile, starts at $72,900. Still, we know which we’d prefer.