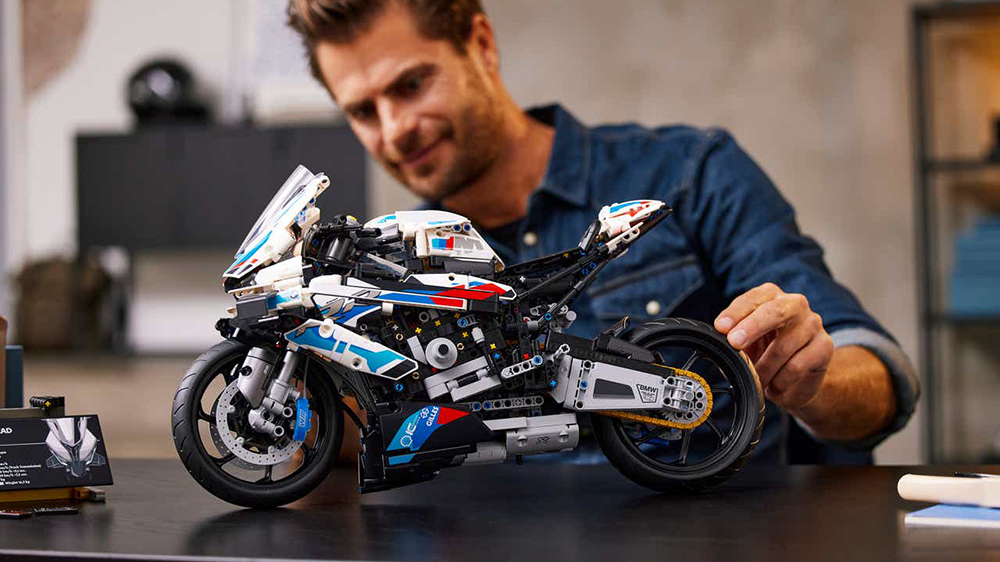 Lego is here to help BMW Motorrad fans get their 2022 started on the right foot.

The Danish toy giant’s latest Technic set is based on the German marque’s BMW M 1000 RR motorcycle. The 1:5 scale model is a highly detailed recreation of one of the most important bikes in BMW history—the very first to carry the “M” badge.

The M 1000 RR made its debut in September 2020 and is based on the brand’s long-running S 1000 RR sport bike. Prior to its introduction, the “M” badge had been reserved for cars and SUVs, such as the M3 or X5 M. Like those vehicles, the M 1000 RR has been extensively modified, including a fairing with aerodynamic winglets, a new titanium exhaust system and an even more powerful inline-four mill that pumps out 212 horses. It’s a superbike, plain and simple.

Lego has managed to accurately capture the elements that make the M 1000 RR significant. Consisting of 1,920 pieces, it stands 11 inches tall, 18 inches long and seven inches wide (no word on how much it weights, unfortunately). It also features several fully functional parts, as is a trademark of the Technic line. These include a three-speed gearbox, gold chain transmission drive, four-piston engine and front and rear suspension.

“It’s been so much fun getting underneath the skin of such a significant model for BMW Motorrad,” Samuel Tacchi, one of the toy company’s designers, said in a statement. “There’s a reason why these beautifully engineered bikes are so universally loved by the biking community, and we are confident our Lego Technic version is a winner like its real-life namesake.”

As you may have guessed, the M 1000 RR Technic model isn’t like the Lego sets you played with as a kid. In fact, the brand makes clear its scale-model motorcycle is meant for adults. It’s got a price to match, too. It’ll cost $229.99 when it goes on sale through the Lego website on January 1.

And if your motorcycle allegiances lie elsewhere, don’t worry, you can still score the Ducati Paningale V4 Technic set. And before the holiday, too.