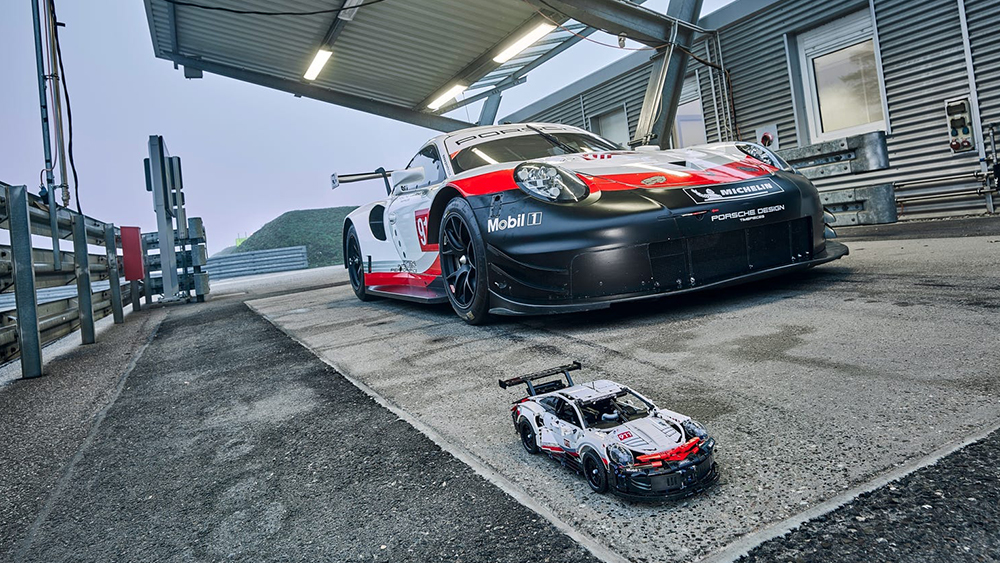 Porsche says the new 911 RSR is the most uncompromising GT race car it has ever built. Now, you can build it, too—out of 1,580 tiny plastic bricks.

Lego Technic has teamed up with the German marque to create a Lego set dedicated to the iconic endurance racer. Suitable for car lovers aged 10 and up, the detailed model is designed to give its builder an insight into supercar engineering and, of course, bring a little joy.

The pint-sized replica sports a spate of realistic mechanisms and authentic features to please Porsche enthusiasts. It has its predecessor’s powerful appearance with sharp contours and aerodynamic detailing, along with a matching red, white and black colorway.

The exterior features a rear wing with “swan neck” mounts, an extended rear diffuser and specially designed side mirrors. It also sports a set of head and tail lights, along with realistic wheels featuring black spoked rims.

Under the teensy hood is a six-cylinder boxer engine complete with moving pistons that are positioned in front of the rear axle. The model also sports a working differential and independent suspension. It may not run like its 510 hp twin, but it still looks plenty menacing.

Open the doors and you’ll find a cockpit that mirrors the original. It features a radar screen, working steering, a fire extinguisher system and even has a track map of the Laguna Seca circuit printed onto the driver’s door.

The model measures 5 inches high by 19 inches long by 7 inches wide, which makes it the ideal size for the mantle or home office. It’s also the ideal project to undertake in quarantine.

This is not the first time a Porsche has been offered in Lego form. Last year, the Danish company unveiled a 1974 Porsche 911 Turbo 3.0 built from its famed bricks. The brand has also offered miniature riffs on the Lamborghini Sián, the Land Rover Defender, the McLaren Senna and even the 1970 Dodge Charger featured in Fast and the Furious.

Check out more pictures of the model below: