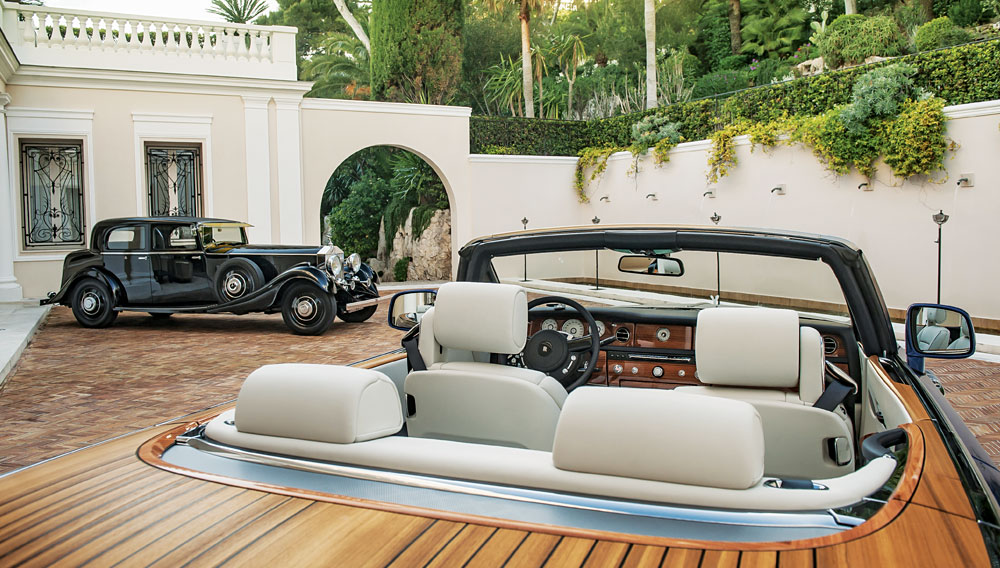 After more than a decade of distractions following its bizarre transformation into a BMW Group subsidiary in 1998, Rolls-Royce Motor Cars is standing tall and breathing evenly. The company is feeling so flush, so confident of its future and bulging overseas markets that it recently introduced not just one new model for 2013 but an entire family of Phantoms: the standard wheelbase sedan, the Extended Wheelbase sedan, the two-door Coupé, and the Drophead Coupé (Brit-speak for “convertible”). Prices for these Series II Phantoms range from about $399,000 for the standard-wheelbase sedan to roughly $470,000 for the Extended Wheelbase and Drophead Coupé; the Coupé is $430,000.

The first Phantom built under BMW ownership arrived in 2003, and it was a big, blocky, somewhat disproportionate sedan with an intimidating presence. Some observers likened it to a Peterbilt 18-wheeler. It was ultraluxurious but not so beautiful or elegant. The front end was huge and square and made a bigger styling blunder by the presence of small, round headlights.

Ten years on, the 2013 Phantom, through all variants, is a softer, better-buffed, and far more contemporary shape. The front and back ends have been resculpted and appear lower, and the entire frontal area, with LED daytime running lights and rectangular headlights, achieves the delicate balance of shape and proportion that pre-BMW Rollers displayed.

The external differences between the old and new generations are cosmetic and subtle. The mechanical changes are more significant and include a smoother, newer 8-speed ZF gearbox mated to an improved differential. The better-calibrated ratios assist with the efficiency of the Phantom’s veteran yet proven 6.75-liter, 453 hp V-12 (based on BMW’s 7-Series engine), helping to reduce emissions and enhance fuel economy by 10 percent. Though with the Phantom, this figure translates to an improvement of about 1.75 mpg.

Rolls-Royce chose the wonderfully inspiring French Rivi­era for the debut of the second generation of Phantoms. Headquarters for the global media launch was Hotel Cap Estel, a 28-room retreat built on its own peninsula between Monte Carlo and Nice. A four-bedroom suite at Cap Estel costs $16,400 a night during the Monaco Grand Prix and about $1,300 for a smaller room during less popular dates.

The test-drives explored the Maritime Alps, high above Cannes, Menton, Antibes, Grasse, and other Côte d’Azur destinations. Lunch (bream sautéed in butter) was hosted by L’Auberge du Vieux Château in the medieval village of Cabris; later, 39-foot J-Craft day cruisers brought the drivers to dinner at A’Trego on Cap-d’Ail’s waterfront. Every movement and moment had to suit the aura of opulence and exclusivity that surrounds Rolls-Royce.

During the test-drive, the Phantom standard-wheelbase sedan idled and even motored along at 100 mph with an eerie quiet. It is not wicked quick, accelerating from zero to 60 mph in 5.7 seconds, which is Lexus territory, and the top speed is limited to a prim 149 mph. Yet the Phantom presents and preserves the brand’s trademark “waftability.” The carmaker’s engineers coined the term after the word wafted (which means “to cause to move lightly”) was used in 1907 by a British automotive magazine to describe a Rolls-Royce ride.

The standard-wheelbase sedan stretches more than 19 feet (the Extended Wheelbase sedan is nearly a foot longer) and is more than 6.5 feet wide. One can find cottages in West Sussex that are smaller. And the car weighs close to three tons. Both sedans and coupes drive big enough for tightly wound driveways (such as those descending to Hotel Cap Estel) to require two-point turns.

With all of that weight and bulk, this obviously is no vehicle for track days. Gentle bending around twisty two-way streets—even with the optional handling package adding stability—yielded less fun than motion sickness during the test-drive. But then Rolls-Royce never has designed cars for dueling and dicing; they are for cruising and loafing without tilting the picnic tables and spilling passengers’ Veuve Clicquot.

In 1998, bmw paid a reported $66 million at a garage sale for just the rights to the Rolls-Royce name, logo, and Spirit of Ecstasy hood ornament. The price did not include a factory, a workforce, or a foreseeable future, because the deal meant that, after the original company had spent a century building the world’s largest, most luxurious, and instantly recognizable automobiles, the new Rolls-Royce would have to reinvent not only the wheel, but the whole bloody motorcar.

The company faced the equally daunting challenges of reviving a moribund brand, fighting off an imposing enemy in the Maybach by Mercedes-Benz, and establishing a new identity while preserving a peerless heritage.

The rookie Rolls-Royce also needed to spend many more months and millions of dollars building a 242,000-square-foot plant in Goodwood, England, several pastoral shires removed from the brand’s ancestral home in Crewe. Then it would have to beat the Victorian bushes in search of craftsmen with dying skills, such as cutting rare woods, stitching premium leathers, and working with maulsticks, a Renaissance-era tool used in the process of painting pinstripes by hand.

Remarkably, incredibly, Rolls-Royce has prevailed. Profits for 2011 were up, leaving the brand firmly in the black. Last year’s sales of 3,538 broke a record that had stood since the company’s finest hour in 1978, when it sold 3,347 vehicles. Production has increased to 15 cars a day, thanks in part to China, which has overtaken the United States as the biggest buyer of full-size Phantoms and smaller, less-expensive Ghosts.

This generation of Phantoms, believes Rolls-Royce Motor Cars CEO Torsten Müller-Ötvös, represents a successful conclusion of “the rejuvenation process” and Rolls-Royce’s return to “the pinnacle of luxury automotive levels.” Müller-Ötvös, a 20-year veteran of BMW who is two years into his reign at Rolls-Royce, was on hand for the media launch in France. “We’re back to where we should be,” he said, noting that he considers the complex transition in 1998 a cleansing for Rolls-Royce. “We were given a chance to reposition a brand, and you get only one chance at that. It was a clever move [for BMW], and a brave one. For in the ’80s and ’90s these cars [Rolls-Royces] unfortunately were not perceived as fine motorcars because the quality was not high, nor the value. The company didn’t care about its brand, just with selling cars, cars, and more cars.”

That, he added, is definitely not the direction of the resuscitated Rolls-Royce. The company certainly will focus on profits—and cost-cutting and new models—but not on volume, which would only dilute the desirability of the brand. Rolls-Royce is happy to leave such a business model to Bentley, a former family member now owned by the Volkswagen Group. Bentley, with annual sales healthy at approximately 7,000 units, would dearly love a return to its halcyon days when it was selling 10,000 cars a year.

“In general, we are now operating in a different segment than Bentley,” Müller-Ötvös explained. Bentley’s sales are driven by the Continental GT, which is less than half the price of any of the new Phantoms. “We are now completely separate from Bentley,” said Müller-Ötvös. “We don’t want to chase volume. We are pursuing exclusivity. We are now selling 3,500 cars a year, which is a little drop in the sea of automotive business, but a precious drop.”

Each phantom, which, according to Rolls-Royce, requires 450 hours and 60 artisans to build, is a veritable toy box. A large, roughly 9-inch infotainment screen offers traditional navigation, as well as 3-D topographical displays and a guided-tour mode that will direct you to and describe, say, the historical sites of Roman Britain.

Front-, rear-, and top-view camera systems present a 360-degree look at the vehicle’s surroundings during tight maneuvering. Adaptive headlights will change range, direction, and brightness depending on the car’s speed and steering angle. Vault-heavy coach doors close at the touch of a button. The Harman Kardon sound system is concert-quality, and a USB port in the glove box enables you to download music directly into the system’s hard drive.

Müller-Ötvös’s favorite interior feature is the Starlight Headliner, a system of fiber-optic lights woven into the leather ceiling that creates a starry-night-in-the-Cotswolds effect. “I can drive through the night, look up, and I’m in heaven,” he says.