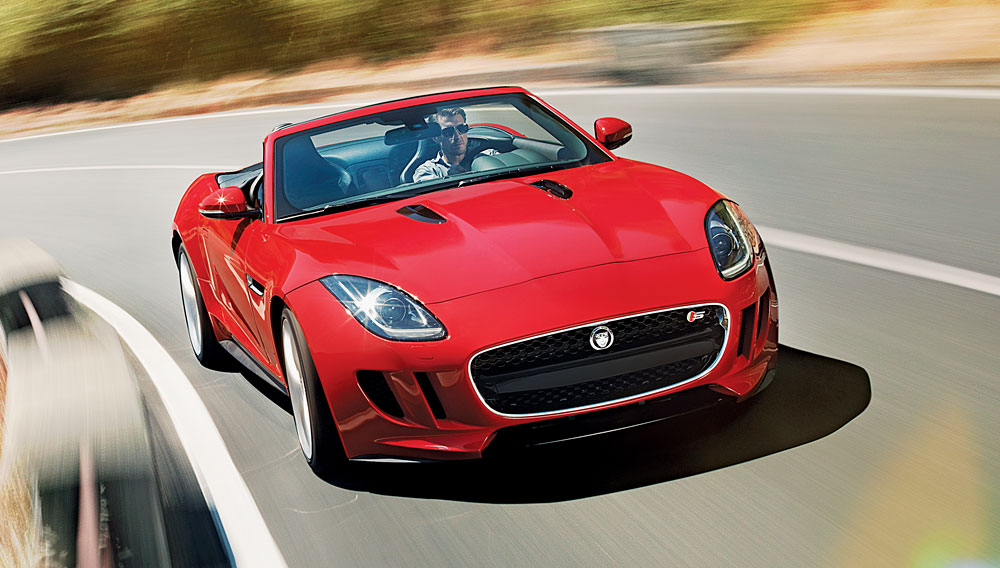 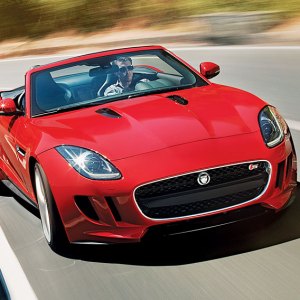 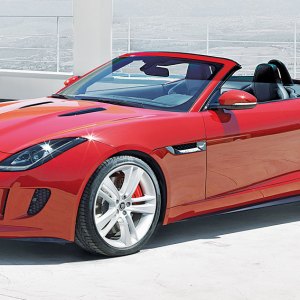 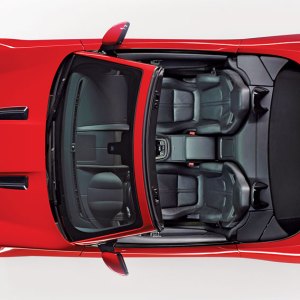 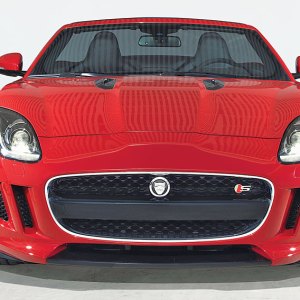 Following the Jaguar E-Type’s debut, at the 1961 Geneva International Motor Show, Road & Track’s Henry N. Manney III, the most entertaining automotive journalist of the 1960s, astutely characterized the car as “the greatest crumpet-catcher known to man.” For 14 years the bullet-shaped sports car worked its seduction, serving as an automotive foil to a generation of playboys and pretenders. Designed not by a stylist but by Malcolm Sayer, the Jaguar aerodynamicist who had created the marque’s C- and D-Types, this road-going derivative of those racecars looked as if it could turn off the Mulsanne Straight and roll right onto Sunset Boulevard.

After a production run of more than 75,000 examples, Jaguar replaced the XK-E—as the E-Type was called in the United States—with the XJS. That coupe (and later convertible) was antipodal to its svelte predecessor in every way. With pinched flying buttresses perched atop a bloated hull, the automobile that followed the world’s most beautiful sports car seemed as stuffy as a smoke-filled drawing room—a fat Daumier caricature next to a delectable Botticelli Venus.

Certainly, recent years have been good ones for Jaguar. The vision of design director Ian Callum has honed the latest crop of luxury sedans and XK coupes and convertibles into some of the sleekest cars in their respective segments. But the company has gone without a true successor to Manney’s crumpet-catcher for nearly four decades, which is an eternity for an automotive marque.

So it was with some fanfare that Jaguar unveiled the new F-Type this September at the Paris Motor Show. Weeks earlier, a small group of journalists glimpsed the newest Jaguar at a private viewing in London. American customers will not see the F-Type in showrooms until next summer, but no doubt they will find that the new Jag was worth the wait.

If it were not an entirely new Jaguar on an entirely new platform, the F-Type might seem like a non sequitur from Jaguar, which has been absent from the sports-car market for 39 years. But its looks and specifications alone suggest that the F is worthy of following the E and that it is a genuine contender in the arena of luxury convertible sports cars.

The F-Type’s architecture is classic front-engine, rear-wheel drive. But with short front and rear overhangs and with its wheels pushed out to the corners, the F-Type certainly does not emulate the E-Type. Instead, it cuts an aggressive profile, and, with such design elements as a forward-leaning grille and a tucked-in tail, it appears to be in motion when standing still.

When not draining the tank during track runs, the F-Type employs Jaguar’s Intelligent Stop/Start system to reduce fuel consumption by as much as 5 percent. Key to the car’s fuel efficiency and maximum performance is the new transmission technology that adds close-spaced ratios to keep the engine in its optimal power band. The 8-speed Quickshift automatic transmission, used on all three F-Type models, is tuned to maximize acceleration. The adaptive-shift software has 25 different programs; as the transmission analyzes driver input, it responds with higher or lower shift points and more- or less-aggressive acceleration. Manual override of the automatic allows drivers to enjoy the wheel-mounted paddle shifters or console-mounted SportShift selector. And the Dynamic Launch Mode lets drivers play dirty when it is time to burn some rubber.

Each F-Type model has its own braking system; the most potent brakes are paired with the most powerful engine. In fact, the V8 S uses the largest set of brake discs that Jaguar has ever fitted as standard equipment to a production car.

Jaguar created the F-Type from a clean sheet, leveraging its expertise in aluminum technology to make a convertible that exploits the material’s light weight and strength. Jaguar also can take advantage of the manufacturing and environmental efficiencies that accrue from using aluminum.

The front subframe and double-wishbone suspension—front and rear—are made of aluminum. The body panels are made from an aluminum alloy, which enabled Callum’s team to create tight radii and sharp feature lines that it could not have achieved with other materials. The clamshell hood—the defining design element of the E-Type—is stamped from a single piece of aluminum alloy. Jaguar notes that more than half the material used to build an F-Type comes from recycled metal, and that the company reuses all metal waste from the manufacturing process. Composites also come into play, in the sills and the trunk lid, where, like aluminum, they enhance the car’s torsional rigidity and reduce its weight. By incorporating so much lightweight material, Jaguar has kept the base model to a svelte 3,521 pounds; the V8 S is only 150 pounds more.

The F-Type’s shape—which includes such aerodynamic features as a flush rear spoiler that deploys at 60 mph, a front splitter, and a rear valance—looks clean, slippery, and sleek. Novel nods to aerodynamics and clean design include hidden door handles—stamped with the Jaguar name—that automatically reveal themselves when touched or activated by the key fob. Once the car is under way, they retract, restoring the door panels’ uninterrupted surface. (The V8 S version has flat side-sill extensions and vanes beneath the “shark gills” to further aid aerodynamics.)

The headlamps are configured vertically, with a single, compact xenon projector and an array of LED running lights that enhance the F-Type’s lines.

The exterior trim, wheels, and tailpipes distinguish each of the three F-Type models. The base model’s satin-black grille, splitter, valance, and vents are replaced by gloss-black versions of those components on the S and V8 S models. The wheels on all three models are alloy and are sized at 18 inches for the base model, 19 for the S, and 20 for the V8 S. Both V-6 models have a center-hung, twin-pipe design reminiscent of the original E-Type’s; the V8 S has four outboard-mounted tailpipes. The S and V8 S are equipped with Active Exhaust (an option on the base model), which opens the bypass valves under hard acceleration to produce a more aggressive exhaust note.

The F-Type is a true two-seater—with no pretense of backseats for Barbie. Consider this Jag’s version of couples therapy. True to British tradition, the top is made of fabric, not tin, and it is insulated to mitigate noise and temperature extremes. The top can be raised or lowered in just 12 seconds, when the car is traveling as fast as 30 mph. When the top is down, it serves as an elegant tonneau cover.

Sixty years ago, leather, burl, and Bakelite were signatures of the XK120. The first E-Types featured formed bucket seats, a turned-aluminum dash, and toggle switches that recalled a British warbird. In the spirit of sporting Jaguars past, the F-Type’s cabin also contains novelties. Most noticeable is an asymmetrical design that includes different leather grains on the driver and passenger sides of the dash and center console. A sweeping grab handle on the center console divides the two spaces. A small, three-spoke steering wheel is available with a flat-bottom design. Air vents on top of the dash deploy only when in use, and the climate functions are controlled by a row of toggle switches reminiscent of the XK-E’s.

If pressed into romantic duty, the F-Type can deliver an intimate musical ambience. Jaguar offers a choice of two sound systems from the British firm Meridian: a 10-speaker, 380-watt setup and a 12-speaker, 770-watt system. The latter features Meridian’s TriField System, which places the driver and passenger at the center of his or her own perfectly focused field of surround sound.

Though so many years separate the F-Type from the E-Type, one cannot help but wax nostalgic. Is the F-Type a 21st-century E-Type? In spirit perhaps. Certainly, it is every bit a Jaguar, and, like its predecessor, as British as tea and crumpets.

The Jaguar E-Type (or XK-E, as Americans came to know it) stunned the car world when it debuted—in coupe form—at the 1961 Geneva motor show. Here was a luxury sports car displaying unmatched beauty and delivering performance matched only by cars costing two to three times as much as the Jag’s relatively affordable $5,900 list price (about $45,000 in today’s dollars).

Jaguar aerodynamicist Malcolm Sayer, who previously designed the successful C-Type and D-Type racers, created two E-Type designs: the Open Two Seater (OTS) roadster and the Fixed Head Coupe (FHC). After half a century, debate remains fierce as to which is the more arresting. Upon the coupe’s unveiling in Geneva, Enzo Ferrari pronounced it “the most beautiful car ever made.” In 1996, New York’s Museum of Modern Art (MOMA) weighed in on the debate when it acquired a 1963 roadster; the E-Type became only the third automobile in the museum’s permanent collection. (MOMA has since added three more cars.)

Underpinning the exquisite bullet-shaped body was an innovative semi-monocoque chassis, with a front subframe and independent rear suspension. All four wheels were equipped with disc brakes (inboard on the rear wheels). Powering the E-Type was Jaguar’s proven 3.8-liter inline-6, tuned to about 265 hp and capable of propelling the car to a scorching 150 mph. A larger, 4.2-liter engine replaced the original in 1964, and a much-welcomed, all-synchromesh 4-speed transmission supplanted the finicky Moss 4-speed gearbox.

Jaguar introduced an ungainly and ill-proportioned 2+2 coupe version in 1966, proving more is not necessarily better. The company later altered the look of the final Series 1 (the original version) cars to comply with U.S. federal safety regulations. The redesign, which also affected the Series 2 (1969–1971) and Series 3 (1971–1974) E-Types, sacrificed such aesthetic delights as glass-covered headlights, delicate bumpers, and small, elegant tail lamps. Nevertheless, a coterie of followers covets the Series 3 roadster because it is equipped with Jaguar’s then-new V-12 engine.

An Italian Translation of the E-Type

By 1966, Italian automotive-design studio Bertone had become a style leader. Its designs of the fabulous Miura and exotic Marzal show car for Lamborghini were shaking up the status quo and sharpening the edge of the international design vocabulary. Bertone’s Marcello Gandini was the man with the singular vision. After the Marzal and before the Lamborghini Espada, which went into production in 1968, Gandini created a little-known one-off called the Bertone Jaguar Pirana.

The Pirana is every bit a Jaguar: It is based on a 4.2-liter Jaguar E-Type 2+2 and incorporates all the drivetrain and underpinnings of the series-production car. The fully operational show car was built in just five months. It debuted at the 1967 Earls Court motor show in London and subsequently was exhibited at shows in New York and Montreal.

Daily Telegraph publisher John Anstey commissioned the Pirana to promote his newspaper, specifying that the car be created from parts already in production. The coach-built steel body sat on a shortened monocoque chassis, and the interior was altogether more modern and luxurious than the cars from the Jaguar factory.

The Jaguar E-Type took its final bow in 1974 and was replaced by the large and far-from-sporting XJS, which soldiered on through 1996. Though the Pirana remains the E-Type that never was, together with the Marzal, it clearly spawned the wild and wonderful Espada.

The Pirana went off the radar until this past August, when the car—restored to its original condition—appeared in Monterey, Calif., at the Concorso Italiano, in celebration of Bertone’s 100th anniversary.