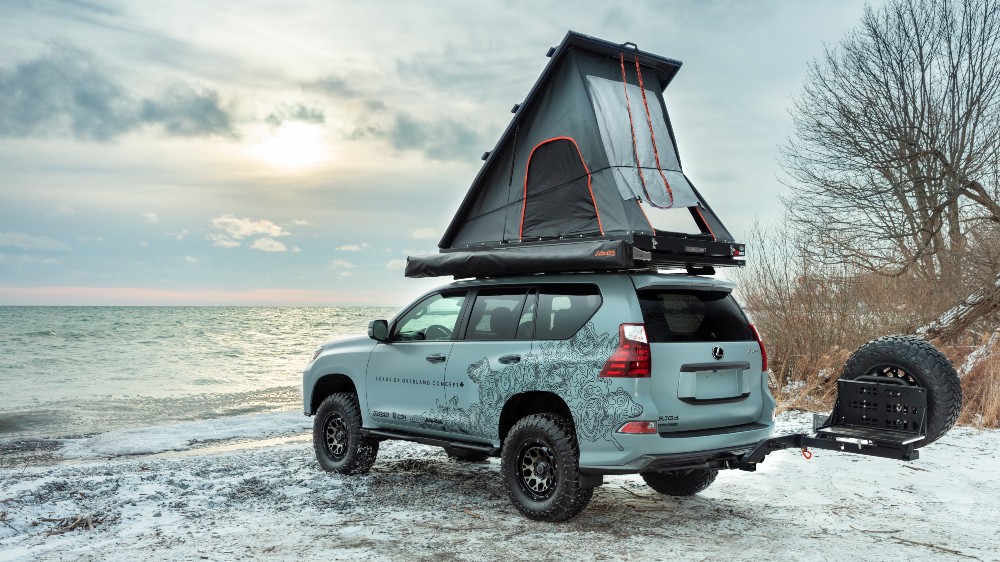 Lexus wants you to know its paying attention. As we’ve seen for months now, luxury campers and trailers are all the rage. And now the Japanese marque is ready to put its own stamp on the trend with a unique off-road concept.

Unveiled earlier this week at the Montréal International Auto Show, Lexus of Canada’s new GX Overland prototype is a luxury off-road SUV aimed at adventurous drivers who crave the ability to set up camp at a moment’s notice. To aid in this, the elegant 4×4 comes equipped with its very own roof-mounted pop-up tent.

Amid the rise of self-reliant adventure travel, the GX Overland’s tent means that as long as you can find a parking space, you’ve got somewhere to sleep the night. Attached to the top of the vehicle, the “quick deploying” tent folds out and includes a bed with more than enough room for two adults. The roof-mounted set-up also includes a massive awning and shower cube that the brand says will help “facilitate remote exploration in comfort.”

But while the tent may be an appealing draw, the GX Overland itself has a lot to offer. Basically a more rugged versino of the Canadian-spec GX460 Executive Package, the SUV has plenty of features that will excite 4×4 enthusiasts, including body-on-frame construction, a dramatically raised suspension with Icon components, skid plates, front winch, rock rails, two-tone wheels and chunky Toyo tires. Inside, the vehicle is equipped with all the luxury amenities you’d expect from a Lexus, including red leather upholstery and large touch screen infotainment system built into the center dash and two screens on the back of the front seats’s headrests.

It’s unclear if Lexus has modified the GX460’s all-wheel powertrain, but regardless, the SUV is more than up for some off-roading. The tent-less SUV features a 4.6-liter V8 mated to a six-speed automatic transmission that is capable of producing 301 horsepower and 329 lb-ft of torque. It also features terrain select and crawl control.

As with all concepts, it’s yet unclear whether the GX Overland will ever make its way to production. But given how similar the SUV is to Canada’s GX460 Executive Package and the US’s GX460 Off-Road Package, we wouldn’t be shocked to see a roof-mounted tent atop a Lexus 4×4 before long.