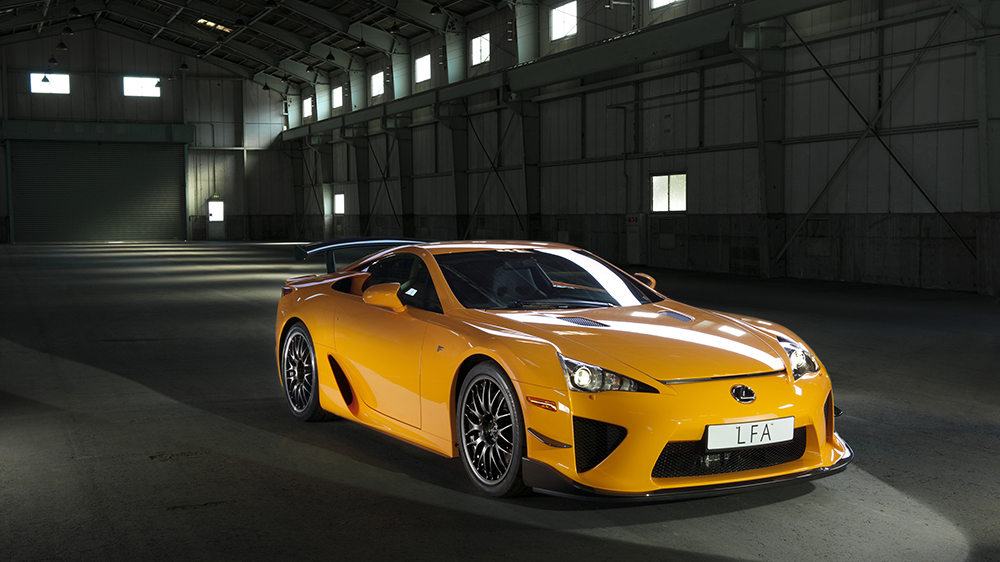 Production of the Lexus LFA may have ceased a decade ago, but its stature has only risen in the years since.

That’s because Lexus’s racing-derived supercar is a true rarity. It’s not just that only 500 examples were built in the two years it was in production (2010–2012) but because it is a singular model in the Japanese luxury marque’s 33-year history. There was nothing like it before it rolled off the line, and there’s been nothing like it since.

That’s why collectors can go a little crazy on the infrequent occasion that an LFA goes up for grabs. Just look what happened when an Ohio-based dealer listed a barely driven LFA that once belonged to hotel heiress and socialite Paris Hilton a couple of years back. The asking price: $448,900, or 20 percent more than the vehicle cost brand new. The thing is, that was actually a bargain—other examples have sold for significantly more in the interim.

Whether it’s the model’s rarity, its naturally aspirated V-10 or those elegant, understated lines, the LFA remains an object of increasing fascination for both collectors and enthusiasts. Below, everything we know about one of the most intriguing supercars of the 21st century.

The LFA was first dreamt up by Akio Toyoda, the CEO of Lexus’s parent company, Toyota, during the early aughts. The exec desperately wanted to build a car that would rival the best sports cars coming out of Italy and Germany and put an onus on two things: performance and drivability. Three prototypes were unveiled during the near-decade that the car was in development—the LFA was part of the Lexus Future (LF) line of concepts, with the A in its name standing for “Apex”—but by the time it was ready for production, Akio’s vision had been realized.

The coupé is powered by a front-mid-mounted, naturally aspirated 4.8-liter DOHC V-10 derived from Tokyo Racing’s race car mill and developed in conjunction with Yamaha. The powerhouse is mated to a rear-mounted Aisin six-speed automated manual gearbox that sends 553 horses and 354 ft lbs of twist to the rear axle (the Nürburgring Package variant has a specially tuned engine that delivers 562 hp). No less impressively, the 10-cylinder engine could rev up 9,000 rpm in just a half second. Because of this, the car had to be equipped with a digital tachometer to display engine speed, since an analog version couldn’t keep up.

Thanks to all that power, the LFA can zip from zero-to-60 mph in 3.6 seconds, hit the quarter-mile in 11.5 seconds and has a top speed of 203 mph. Traveling at that kind of speed is a thrill, a sensation only heightened by the sound of the LFA’s racing-inspired mill. As one Toyota engineer reportedly put it, the supercar’s engine emits the “roar of an angel.”

From the outset, the LFA was designed to be a high-performance beast. Sports and supercars need to look cool, of course, but Kengo Matsumoto and the rest of the team at Lexus Design were more focused on function than style. If an element essential to the vehicle’s aesthetic had to be sacrificed to improve aerodynamic performance, then so be it. It’s because of this that the LFA is one of the more understated supercars of the last decade.

The LFA is a sleek coupé that rides low to the ground. The carbon-fiber exterior has a long nose, tall haunch and sharp edges, all of which combine to create as much downforce as possible. There are also a variety of scoops and vents, most notably just behind the side windows and above the rear fenders designed to help cool the engine and brakes. The cherry on top, though, is the speed-sensitive rear wing that rises when you eclipse 50 mph. All of these elements combine to give the car a decidedly athletic look, especially compared to other Lexus models. The marque also offered up plenty of color options to help buyers make their LFA their own. Customers could choose from 28 body colors, along with three wheel colors. Special order hues were also available.

The LFA’s body is no less impressive. Even by supercar standards, it is lightweight—tipping the scales at a relatively paltry 3,559 pounds. Lexus found ways to minimize heft throughout the vehicle’s construction, but this is especially true of its body. It’s not unusual to see a car outfitted with elements designed to reduce curb weight, but the LFA’s body leaned heavily into carbon fiber-reinforced polymer. In fact, 65 percent of the car’s body is made from the feather-light material.

Performance isn’t necessarily the first thing people think of when the name Lexus comes to mind. Luxury is, though. And sure enough, the LFA offers the kind of plush interior for which the marque has come to be known.

The cabin features a two-tone colorway, and everything, including the two bucket seats, is covered in luxe materials such as fine leather and alcantara, which are tastefully accented with carbon fiber and metal. The driver’s cockpit features a digital TFT display changes color to warn you if you’re approaching the redline. The steering wheel includes alloy paddle shifters and a right-mounted ignition button (you’ll still have to insert the key, though). The LFA predates the infotainment system trend of the last few years, but it does have a rear-view camera, and a 12-speaker Mark Levinson sound system. In an interesting twist, it originally came with a set of custom-made Tumi suitcases that matched the cabin’s color scheme.

The LFA’s interior has a sporty feel that makes clear you are sitting in a high-performance vehicle. Adding to this dynamic is the fact that Lexus channeled two octaves of engine noise into the cabin. You won’t just feel the engine’s roar when you accelerate, you’ll hear it loud and clear.

Why It Was Only in Production for Two Years

Lexus built just 500 examples of the LFA—436 “regular” models and 64 Nurburgring Package variants—between 2010 and 2012, 190 of which were for the US market. The decision to keep the production run so low appears to have been intentional. The company was selective about choosing the LFA’s buyers, opening up pre-orders in 2009, but only deciding who’d be a lucky recipient in 2010. The car was initially also going to be sold via a two-year lease program, to stop owners from quickly flipping it for profit, but the marque decided instead to offer it to a select group of buyers. Lexus only hand-built 20 examples per month, with each coming with a numbered plaque signed by the specialist who’d assembled the vehicle.

Still, it’s easy to wonder how much demand there really was for the car in its early years. Although production of the supercar finished in 2012, the supercar lingered on lots until the end of the decade. At least 43 brand-new LFAs were sold in North America after 2013, with three of those sales coming in 2020. It’s unclear how much dealers were charging for those last zombie LFAs, but it’s safe to say that few would’ve predicted the car would command double its retail value a decade later.

Reviews for the LFA were strong upon its release, but when you look at the publicly available sales numbers, it’s easy to wonder if the vehicle was ahead of its time. Regardless, it would seem that car lovers have finally caught up.

Could the LFA Make a Comeback?

December 14 of this year will mark the 10th anniversary of the final LFA—a white Nurburgring Package variant—rolling off the line. In the time since production ceased, the marque gave no indication that it would revive the nameplate, even as the reverence for the supercar has grown. That could change in the near future, though.

Earlier this year, Lexus shared the first images of an all-electric supercar concept the company has been working on in secret. The battery-powered speed machine currently has no name, but it’s been reported by multiple outlets that it’s viewed in-house as a spiritual successor to the LFA. With the EV not due until 2025, there’s still plenty of work to be done, but it will sport a sleek and aerodynamic body made primarily from carbon composite and an all-electric powertrain that should please even the snobbiest of enthusiasts. The word out of Japan is that the car will be able to accelerate from zero-to-60 mph in less than two seconds and travel over 400 miles on a single charge.

Only time will tell if it can meet the lofty standards set by the LFA, but it’s nice to know the company hasn’t given up on boundary-pushing performance vehicles just yet.

How Much Does the LFA Sell for Now?

The base price of the LFA was about $375,000, but with loads of options that could easily push the price closer to $400,000. The performance-oriented variant with the Nürburgring Package was even more expensive, coming in at $445,000, making it one of the most expensive Japanese road vehicles ever built.

Prices—as often happens when a car is rare and revered—have climbed significantly in the decade since production of the supercar ceased. Hilton’s LFA, which had just 3,990 miles on it at the time of sale, sold for nearly $75,000 more than it cost originally. Pricing for the supercar has grown exponentially in the two years since. Hagerty puts a “good condition” LFA’s value at $731,000 and the Nurburgring Package variant’s at $1.4 million as of press time. And over the last year, RM Sotheby’s has seen examples of both models sell for even more than that. With only 500 LFAs in existence, if you see one for lower than either of those prices, you might want to grab it quick.