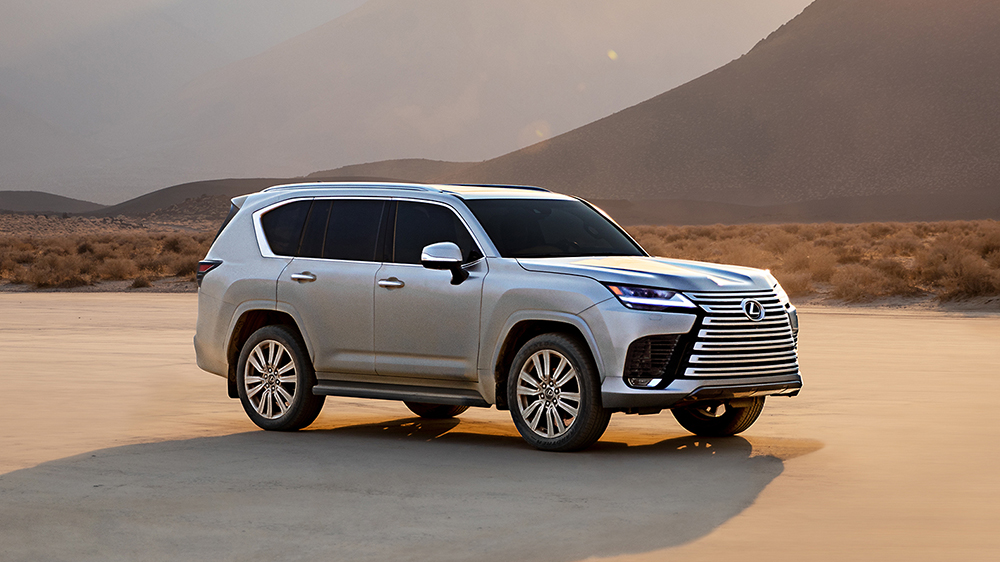 It turns out Toyota’s 300-Series Land Cruiser is coming to the US after all—just not as a Toyota.

The redesigned version of the beloved SUV will arrive stateside in the form of the new Lexus LX 600, the brand announced on Wednesday. The luxury marque’s version of the vehicle is almost identical to its parent company’s 4×4 only with more fancy bells and whistles.

American off-road enthusiasts were distraught to learn that Toyota would stop selling the Land Cruiser here following the 2021 model year. Luckily, if you can get past the different nameplate, the LX 600 is just a Land Cruiser in fancier clothing. It has the same general boxy shape as Toyota’s next-gen SUV but with more refined detailing—think shiny chrome instead of matte black accents. The biggest difference between the two vehicles is the presence of Lexus’s trademark spindle grille, which is better integrated into the front of the vehicle than it has been in past generations.

The contrasts are more pronounced inside. The front of the two SUVs is basically the same, though the 12.3-inch infotainment touchscreen is now complemented by a smaller 7-inch touchscreen that you can use to control climate settings and toggle between terrain modes. A 25-speaker Mark Levinson audio system should offer a significant upgrade over the Toyota edition.

In the back, you can now choose between one of three seating configurations. The first, which comes with the standard model, features a three-person bench in the back, bringing total seating to five. Up next, is three row layout, which seats seven in a 2+3+2 configuration. The third row, which comes on the Premium, Luxury and F Sport variants, folds down flat in the back when you don’t need it or are in need of more cargo room. Most interesting of all, though, is the Ultra Luxury variant’s four-seat layout, which includes two deluxe reclining chairs in the rear with foot rests that call to mind decadent rear seating of the Mercedes-Benz S-Class, just without the Champagne chiller.

Inside the LX 600 Ultra Luxury  Lexus

The LX 600 doesn’t just look the part; it can act it, too. Under the hood, you’ll find 3.4-liter twin-turbocharged V-6, which may be smaller than the last generation’s 5.7-liter V-8, but is more powerful. Its mated to a 10-speed automatic transmission and can generate 409 hp and 479 ft lbs of torque. Mileage hasn’t been revealed yet, but, as CNET Roadshow points out, it will almost certainly be better than the pitiful 14 mpg rating (12 mpg city, 16 mpg highway) of its predecessor, the LX 570.

Like the 300-Series Land Cruiser, the LX 600 is built on the new GA-F platform, which acts as the foundation for its body-on-frame construction. Despite a chassis that’s 20 percent more rigid than before, the new 4×4 is 441 pounds lighter than the LX 570. There’s a double-wishbone suspension in the front and a four-link axle-type suspension in the back. Each version also includes Active Ride Height, which constantly adjusts the vehicle’s ground clearance whether your on or off road; electronic power steering, for better control, and electric braking system, for more efficient stopping. The F Sport variant, meanwhile, also features a Torsen limited-slip differential, specially calibrated dampers, a blacked-out grille and 22-inch wheels.

Lexus’s SUV is expected to arrive here in the first quarter of next year. The marque has yet to announce pricing for the LX 600, but Car and Driver expects it to start around $90,000, with the top-of-the-range Ultra Luxury variant possibly starting in the six figures. For many off-roading enthusiasts, that will be more than a fair price to pay for a 300-Series Land Cruiser you can buy right here at home.

Check out more images of the LX 600 below: