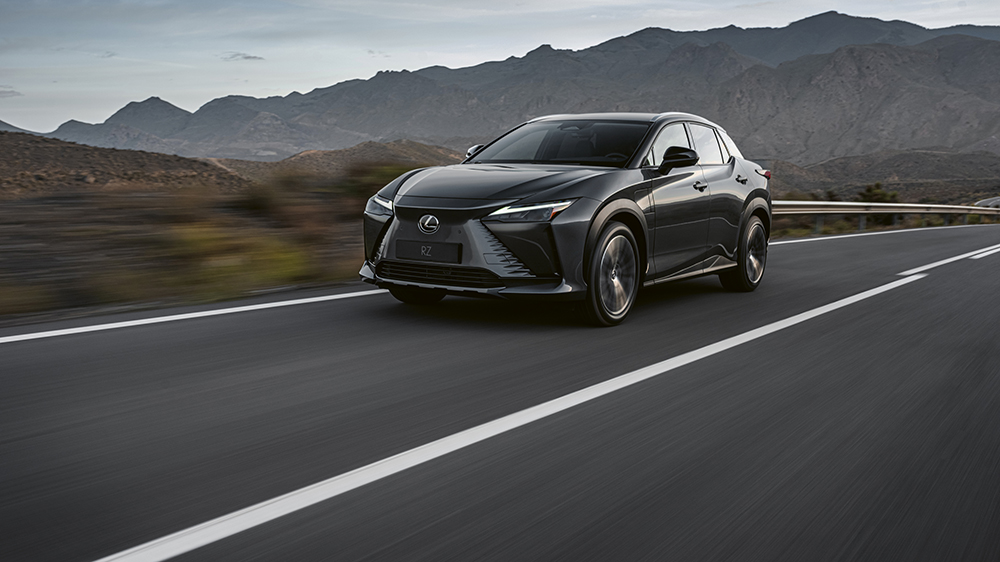 Lexus is finally bringing an EV to the US—and of course it’s an SUV.

The Japanese luxury marque unveiled the all-electric RZ 450e on Wednesday. The brand is calling the compact crossover its “first battery EV,” but that’s not quite true; it’s just the luxury marque’s first that will be sold globally.

The RZ 450e is based on the Toyota bZ4X SUV. Toyota, after all, is Lexus’s parent company, so the RZ 450e is essentially a more refined version of that EV. It sports a front fascia with the marque’s signature lights and spindle grille. The rest of the vehicle shows off a streamlined aerodynamic shape that Lexus is calling its new “spindle body” design. The automaker says the sleek shape will be a trademark of its EVs going forward. It’s not as striking as some of the battery-powered concepts we’ve seen from the brand—especially the Blade Runner-esque LF-30 Electrified—but it does look both athletic and elegant. It also a lot more stylish than the brand’s first EV, 2019’s rather generic UX 300e crossover.

While the RZ 450e’s exterior may look sportier than its Toyota-built cousin, its cabin is decidedly more upscale. The minimalist design and panoramic roof give it a wide open and airy feel, even if someone is sitting in each of the five seats. The dashboard, meanwhile, is equipped with digital gauge cluster in the cockpit and a 14.4-inch infotainment touchscreen powered by the Lexus Interface multimedia system. One feature to look out for in the future is an optional yoke-style steering wheel. You’ll presumably be able use it with the brand’s new ultra-precise “Steer by Wire” handling system, which is set to arrive at an unannounced future date.

Lexus’s EV is also more powerful than the bZ4X. The two SUVs ride on the same e-TNGA platform, but the RZ 450e’s powertrain consists of two motors. The engine situated on the front axle produces 201 hp while the one on the back delivers 107 hp, putting combined power at 308 hp, according to the brand. That figure is substantially than the 214 horses generated by the bZ4X. A torque figure wasn’t announced. CNET Roadshow reports that the powertrain will produce 321 ft lbs of torque, but Lexus would not confirm that number to Robb Report. We’re still waiting on acceleration and top speed figures as well.

The dual-motor powertrain gets its juice from a 71.4-kWh battery pack, about 65.0-kWh of which is usable energy. Lexus estimates that you’ll be able to drive the SUV for 225 miles between charges. That number may have been fairly common as recent as two years ago, but it’s now well off the 300-mile mark that so many automakers are aiming for at this point.  No charging rate or time info has been released as of writing, but if the brand hopes to allay customers’ range anxiety, a DC fastcharger will likely need to come standard.

Lexus’s compact SUV won’t go on sale until the fall and is expected to start around $50,000. It may not be the paradigm shift some of the brand’s concepts have hinted at, but it will be the start of a new era for the marque.

Check out more photos of the RZ 450e below: