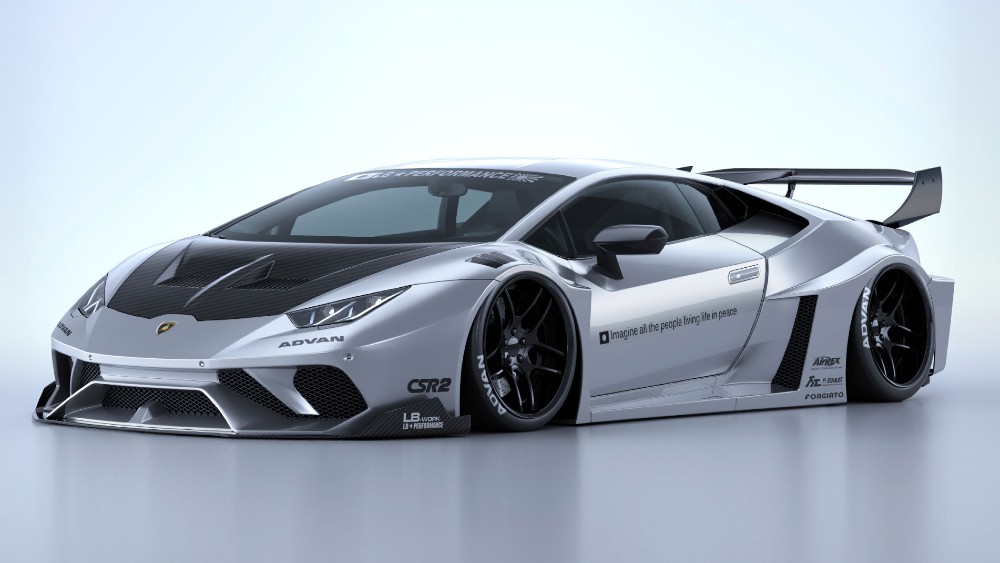 Like all Lamborghinis, the Huracán has a wild and distinctive style all its own. But that doesn’t mean things couldn’t stand to be turned up a bit—at least as far as Japanese tuner Liberty Walk is concerned.

Known for its aggressively wide bodykits, the company’s aims to soupe up the already macho Huracán. Dubbed the LB-Silhouette WORKS HURACAN GT kit, the set includes a front bumper, front diffuser, rear bumper, rear diffuser, rear wing, wide fender and bonnet hood, all of which combine to add even more jaw-dropping angles and sharp lines to the Italian speedster.

The kit not-so-subtly tweaks each area of the Huracán. With a vented carbon-fiber hood and splitter, the front of the car has a markedly more aggressive appearance than most of the company’s sets. On the sides, a racing-style decal reads “imagine all the people living in peace”—which is definitely what John Lennon had in mind with that lyric—as extended side skirts and noticeable wheel arches give the car added width. But it’s the rear of the car where the tuner really went to work, adding a huge, sloping spoiler and an equally large diffuser to house the exhaust pipes. And, as if answering critics of its past Lamborghini bodykits, there are no rivets to be seen, keeping the now wider vehicle looking as sleek as ever.

And it would appear that Liberty Walk aren’t the only ones who’d like to see the Huracán look a little more rambunctious. Last month, the Italian automaker revealed an off-road concept based on the two-seater called the Sterrato, which saw the body raised, along with the addition of massive fender flares and an LED light package.