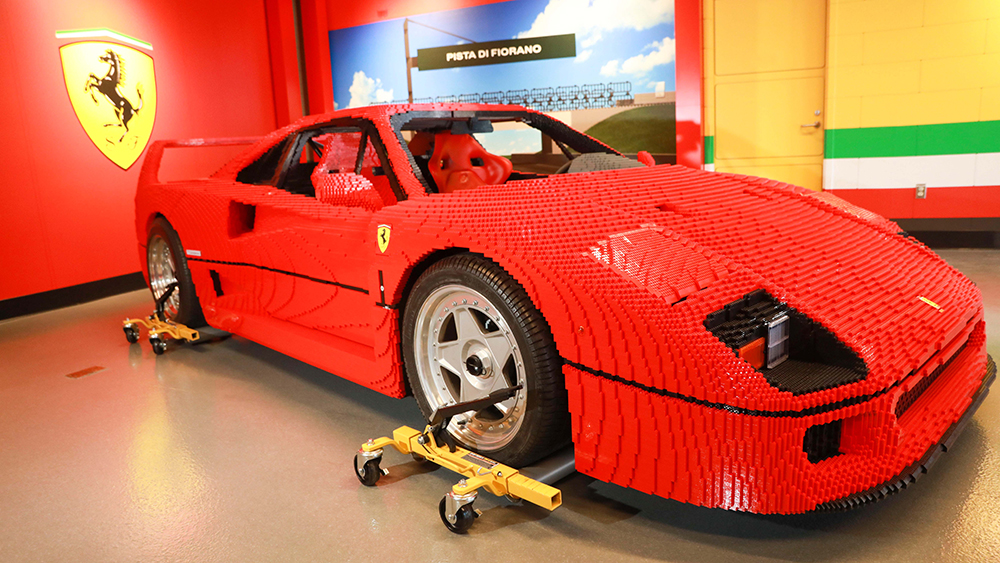 On your marks, get set, go … to Legoland?

The building-block-based theme park just released the first images of its life-size model of the classic red Ferrari F40. Built with more than 358,000 Lego parts and weighing over 3,000 pounds, the car will be part of Legoland California Resort’s “Ferrari Build and Race” attraction, which is set to open May 12.

The back of Legoland’s model Ferrari.  Legoland California Resort

Similar in size to the real deal, the Lego Ferrari measures in at 14-feet long, over six-feet wide and four-feet tall, with a wheelbase at eight feet. It took designers more than 1,800 hours to develop and builders more than 1,900 hours to construct. The model will be parked in the garage area of the park, where visitors will be able to sit in the F40 and take photos, surely inspiring jealously in all of the car fans who haven’t yet been able to check out the vehicle.

“We are excited to build upon our existing relationship with the Lego Group by combining our leading brands within this transformative entertainment attraction,” Annabel Rochfort, director of location-based entertainment and e-sports for Ferrari, said in November, when the collaboration was first announced. “The Build and Race experience has been designed to engage with both Ferrari and Lego lovers of all ages, aligning with Ferrari’s strategy to reach out to its younger fans.”

Someone works on the model Ferrari F40.  Legoland California Resort

Introduced in 1987 as a successor to the 288 GTO, the actual F40 was the last car to be personally launched by Enzo Ferrari, quickly imbuing it with a legendary status. The Legoland model is just one of three interactive zones that will allow aspiring drivers to get a feel for what it’s like behind the wheel of such an icon. Guests will be able to build their own Lego Ferraris, for example, which they can then race against other cars on a digital racetrack that’s based on Pista di Fiorano, a private track owned by Ferrari.

Many kids will certainly enjoy the attraction, but we bet you’ll be seeing a ton of Ferrari-loving adults at Legoland in the near future, too.