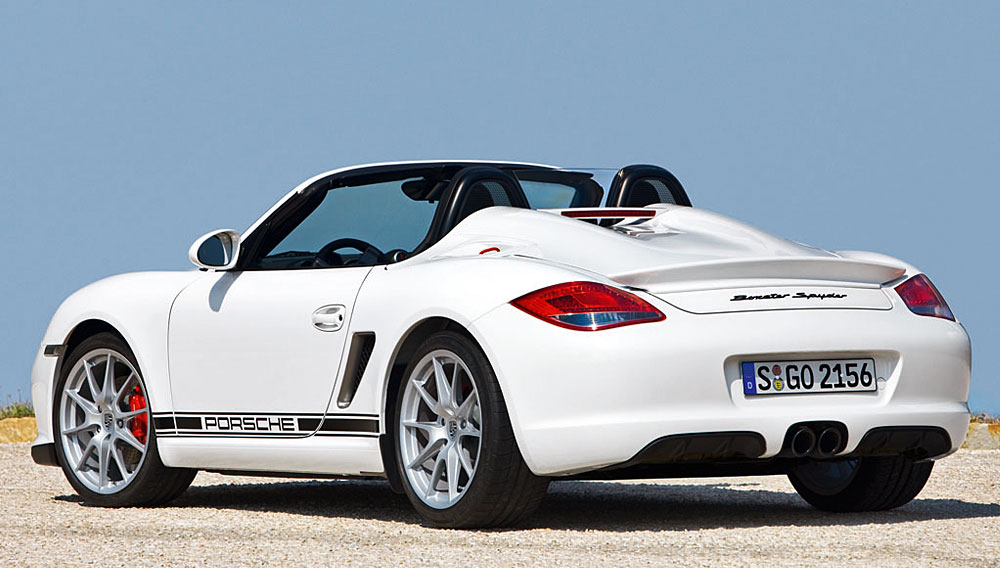 Weight is the enemy of performance. It’s something that Porsche, with some 28,000 racetrack triumphs under its belt, knows better than most. To that end, meet the 2011 Porsche Boxster Spyder, the lightest model in the sports-car maker’s range. Although the standard Boxster roadster is hardly what you’d call ponderous, the 2011 Boxster Spyder drops a significant 176 pounds compared with the Boxster S. That kind of weight advantage, as any racer will attest, can make the difference between a winner and an also-ran.

To achieve its 2,811-pound fighting weight, the Spyder makes greater use of feather-light materials (the door skins, for example, are now made of aluminum) and forgoes a few notable niceties, including air-conditioning and an audio system (total savings: 42 pounds). A minimalist two-piece soft top replaces the standard Boxster’s power-operated convertible top, and the single-piece, Carrera GT-inspired rear deck lid is made of aluminum (total savings: 46 pounds). The seats and wheels are lighter (saving 27 and 11 pounds, respectively), and the fuel tank is smaller by 2.6 gallons (saving 16 pounds). Porsche even deleted the cup holders and replaced the interior door handles with straps of nylon webbing. These guys are serious.

But the Boxster Spyder brings more to the game than fewer pounds. The 3.4-liter horizontally opposed six-cylinder engine belts out 320 horsepower at a howling 7200 rpm, 10 more than the Boxster S and 65 more than 2.9-liter engine in the standard Boxster. In addition to being decidedly nimbler than its more generously equipped siblings, the Boxster Spyder is also marginally quicker. Equipped with Porsche’s Sports Chrono Package ($960) and the lightning-quick Porsche-Doppelkupplung (PDK) dual-clutch automated manual transmission (a $3,420 option; a traditional six-speed manual is standard), the new Spyder can make the sprint to 60 mph in 4.6 seconds, a tenth of a second quicker than a so-equipped Boxster S, and rush all the way to an open-top 166 mph.

The race-ready Boxster Spyder arrives in Porsche showrooms this month, priced at $61,200. That’s a $3,200 premium over the Boxster S, but in pursuit of the checkered flag, that seems like a small price to pay. (porsche.com/usa)