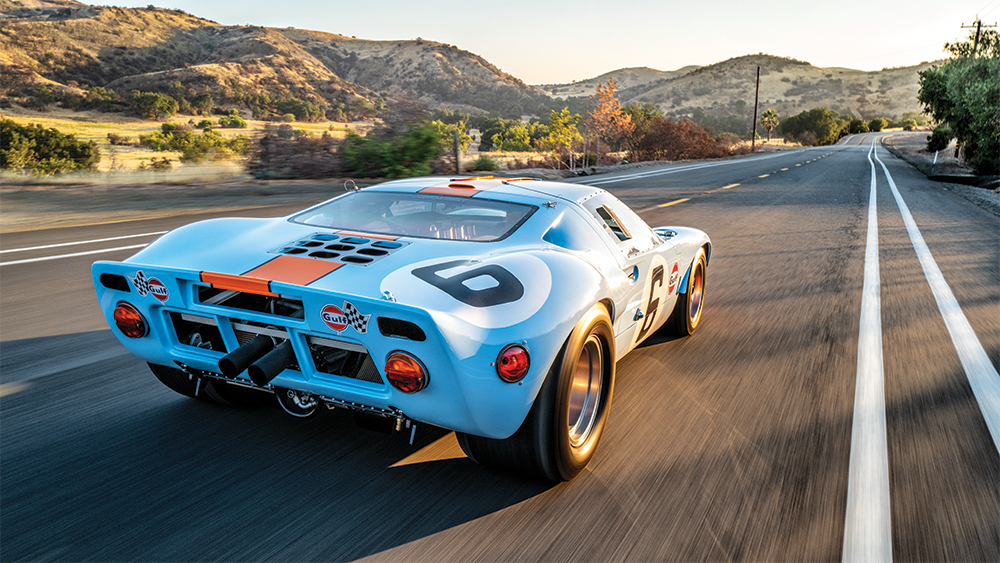 Sitting just 40 inches above the ground, the GT40 feels impossibly low upon entry. But slither over the sill-mounted shifter, under the Frisbee-sized steering wheel and into the right-hand seat, stab the start button and you’re rewarded with pure sonic adrenaline. The engine explodes to life, sucking a whale-lung’s worth of air into four Weber carbs and bellowing from an exhaust loud enough to rouse Beethoven.

With its sweep of the top three finishes at the 1966 24 Hours of Le Mans, the GT40 became an instant icon. Powered by a fire-breathing Ford 427 cu in V-8 engine, it continued its first-place streak at the fabled endurance race through 1969, fit, for the latter two races, with a 302 cu in V-8.

This is a Tool Room GT40P/1075, built to replicate every nut and bolt of the same car that won in ’68 and ’69. Made in South Africa by Superformance (under license from Gulf Oil and Safir GT40) each Tool Room car bears a chassis number within the original P1000 series and can be homologated for historic racing. Impeccably constructed and wearing the iconic Gulf livery, the Tool Room GT40 costs from $300,000 to $330,000 ready to roll, depending on engine and options; a non-homologated version called the 50th Anniversary GT40 starts around $250,000 and comes with air-conditioning, optional left-hand drive and modern components.

Stretching its legs through sweeping back road curves, the car’s 14-inch-wide rear tires push like a steamroller. The brute is a challenge to control, with serious understeer, a suspension that transmits every pebble and a recalcitrant shift linkage, all battled from a stiflingly hot, cramped interior full of gasoline fumes. Yet the visceral experience becomes more addictive and exhilarating with every sweeper—a muscular, aggressive dance requiring constant concentration on steering, shifting, braking and maintaining revs above 3,500 rpm (without radiator fans, the car will boil to death if not kept at speed).

An inside look of the racer’s circuit-ready interior.  Robb Rice

Having spent years behind the wheel of a De Tomaso Mangusta, which shares the same Ford 302 power plant and ZF transmission, I’m endeared to the quirks and personality of the GT40. But make no mistake: This is a high-strung race car, inspired by 420 hp and 425 ft lbs of torque at 5,500 rpm. It requires effort, though as far as work goes, it’s the thoroughly rewarding variety. At 7,000 rpm, the cockpit’s apocalyptic cacophony becomes an ecstatic jackhammering—the sort of sound one might expect if shattering the space-time continuum and landing, say, at Circuit de la Sarthe, circa 1969.