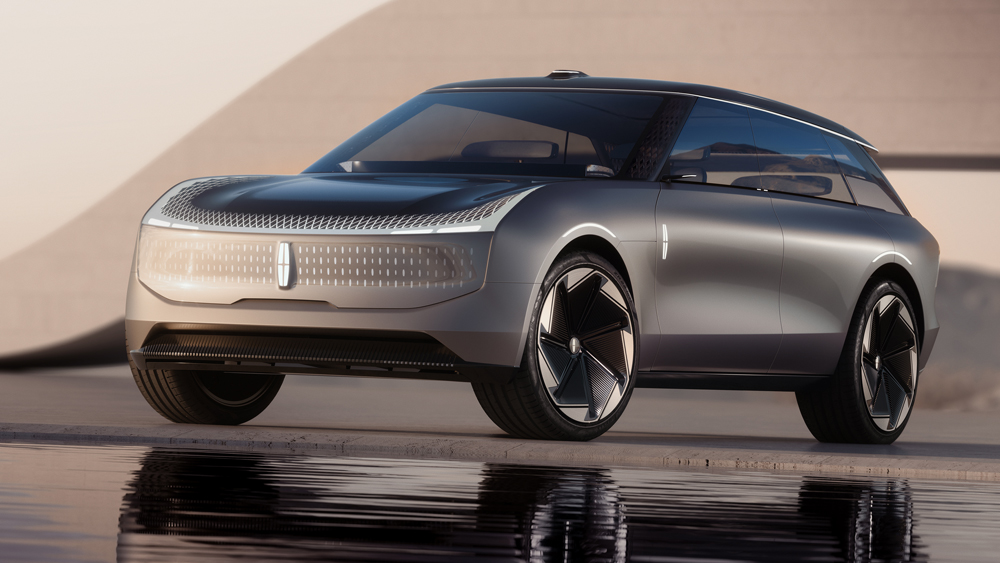 It’s been more than 100 years since Henry Ford bought the Lincoln brand and, since then, its flagship vehicles have been owned by presidents, diplomats and celebrities alike. And while what was once a shining symbol of American luxury and design may have dimmed over later decades, Lincoln hopes the new electric Star Concept manifests the message that the automaker’s future is brighter than ever.

Building upon Lincoln’s design transformation over the past several years, defined by stately proportions, elegant lines and human-centric technology, the concept previews a sleek crossover built on the brand’s new electric architecture. Also showcasing the latest evolution of Lincoln’s design language, referred to as Quiet Flight 2.0, the Star features a strong stance, a dropping roofline, reductive surfaces and aerodynamic enhancements.

“The goal was to take away elements. We wanted to keep it clean and wide and purposeful,” says Kemal Curic, Lincoln’s head of design, while giving Robb Report a walk-around tour of the vehicle in Hollywood.

At first glance, the side-view silhouette may conjure images of other coupe-like SUVs, such as the Range Rover Velar, but the Star retains cues that are distinctly Lincoln. From the front, the traditional grille openings of gasoline-powered cars are replaced by a flush, upright fascia that clearly telegraphs the Star’s electric power-train configuration. A large, backlit Lincoln emblem is the centerpiece, with dozens of smaller stars of alternating sizes shining across the width of the face. When opened, the entire hood is held suspended and the front end moves forward like a tray to reveal ample storage space underneath. Electro-chromatic glass on the hood allows more light into the cabin when driving, but can also be darkened to hide anything stored inside. And in the rear, the tailgate folds out into a lounge seat.

A lattice-pattern theme is used in several areas throughout the car, from front and rear lighting signatures to 3-D-printed A- and D-pillars. “We wanted to create a sense of openness, to give you the feeling that you can easily see to the outside,” Curic says. Light plays a big role in the Star’s futuristic presence, from the animated welcome sequence to the subtle side markers gracefully following the curve of each wheel arch. The SUV’s slightly narrower rear track, sharp trailing edge and closed, aerodynamically optimized wheels, help it slip more easily through the air, reducing turbulence and theoretically increasing range.

When opened, the electro-chromatic-glass hood is held suspended and the front end moves forward like a tray to reveal storage space underneath.  Lincoln

Lincoln didn’t release specifics about the motors, battery pack or range, but it’s easy to imagine the Star Concept could share the same power train with the Ford Mustang Mach E. We’d especially love to see the 480 hp setup from the Mach E GT, with its 600 ft lbs of torque, on a future Black Label edition.

The interior, which we only saw by way of virtual reality, has been envisioned to echo the airy, intricate lattice pattern from the exterior. Instead of the team creating the Star from the outside first and then addressing the cabin, designers started with the rear seats and an emphasis on the passenger experience. “We focus a lot on what we call this third space,” says Robert Gelardi, Lincoln’s chief interior designer. “The rear space can be used as an office, a lounge for socializing with friends or a place of refuge.”

A two-tone color scheme in cream and warm brown looks both modern and traditional. Lincoln has long focused on broad, horizontal lines, and the Star is no exception. A single coast-to-coast display screen sweeps across the wing-shaped instrument panel while floating atop simple and pared-down controls. Ambient lighting plays across the dash, side door panels and even the front floor, with its bold stripes of white illumination.

The design of the Star Concept began with the rear seats and a focus on the passenger experience.  Lincoln

Designers also created three unique sensory experiences, which combine light, graphics displays and scent to help occupants relax or recharge. Although this isn’t a new idea—Mercedes-Benz introduced a similar feature a few years ago on its previous-generation S-Class sedan—it’s a testament to the way manufacturers are thinking differently to incorporate all of the senses, especially in an electrified future where the roar of an engine and the smell of gasoline will be no more.

According to the company, the Star is only a concept and won’t see production, but Lincoln president Joy Falotico says the brand will introduce three new EVs by 2025, with a fourth coming a year later. Along with that, Lincoln is partnering with dealers to grow boutique retail venues in its top markets, including Scottsdale, Ariz., and Bethesda, Md. Falotico says that there are already 27 of these vitrine-like stores worldwide, and 35 more planned to open this year. This pipeline alone is expected to generate more than 80 percent of total sales volume.

Falotico also says that the brand is working toward a fully digital, end-to-end experience and continues to build out its client services, including a mobile-detailing pilot program in Houston, Tex. Meanwhile, this latest concept serves as a beacon for Lincoln’s next chapter. As Curic puts it: “We are going after a different star that’s guiding us into an electrified future.”