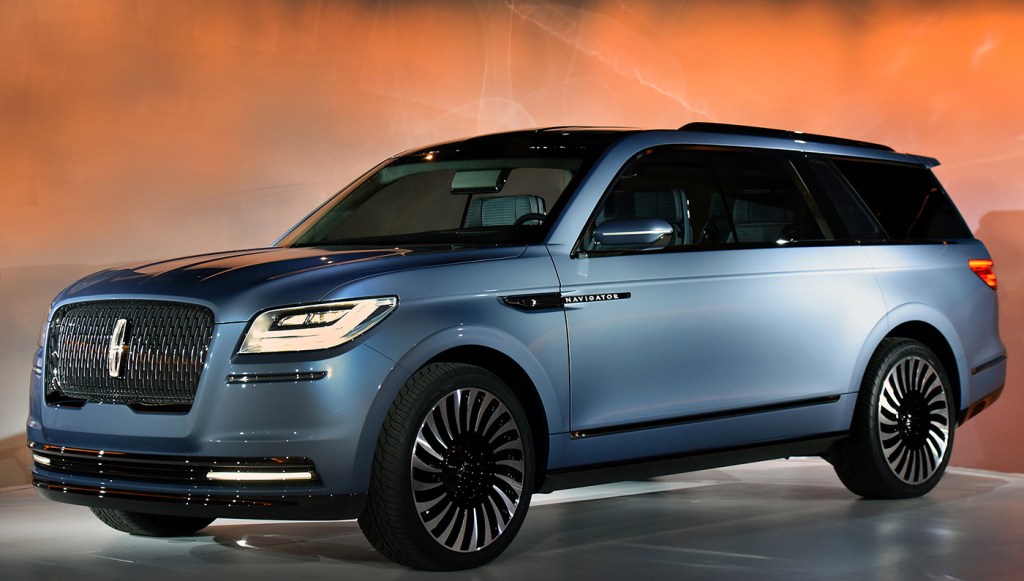 Lincoln continues its renaissance with the daring Navigator Concept, unveiled on the cusp of the New York International Auto Show. Design director David Woodhouse, in an exclusive tête-à-tête, gave us some insight into the new flagship SUV.

With nautical design inspirations and Lincoln’s new signature face (first seen on the new Continental), the SUV paints “a story about going to your yacht or your beach house,” Woodhouse says. “The overall impression was very much East Coast.”

Woodhouse says the silhouette and proportions of the new car are an improvement over the boxiness of the current model. Massive gullwing doors and triple sets of running boards underscore the show-car feel. Of the new exterior color, which Woodhouse calls Storm Blue, he again asserts East Coast influence. “It’s not smiley, bright California,” he says. “It’s a very cool blue—hypnotic and complex.”

Under the hood is a 400 hp 3.5-liter twin-turbo V-6; gears are changed via a new “piano key” shifter, which features gear selections in a horizontal, rather than a vertical, row.

Woodhouse says the interior design aims to emulate a decompression tank, which creates “a sense of equilibrium and balance.” In the cabin as well as around the exterior, broad, horizontal lines give a sense of volume and width. “It’s a subconscious thing . . . the massive scale. You go somewhere else, like the Alps or Europe. Everything is constricted. But in America, you have this broad horizon.”

During development, Woodhouse says he saw the soothing effect of the interior on occupants firsthand. “They get in and they literally expel air. I’ve seen it in the people. And that’s totally the counter to our competitors. It’s such an American thing.”

In addition to active safety features and a park assist system, every seat has a widescreen display, where passengers can play games—such as Pong—with one another. An intercom system uses microphones in the cabin to pick up the voices of the people inside and amplify them through the stereo system. “It’s very much a social experience,” Woodhouse says.

Although the new Navigator is only a concept, it gives a strong hint to what the next production SUV will look like. When asked to name his favorite thing about the Navigator Concept, Woodhouse answers, with his face beaming: “The whole frickin’ car.” (Lincoln.com)