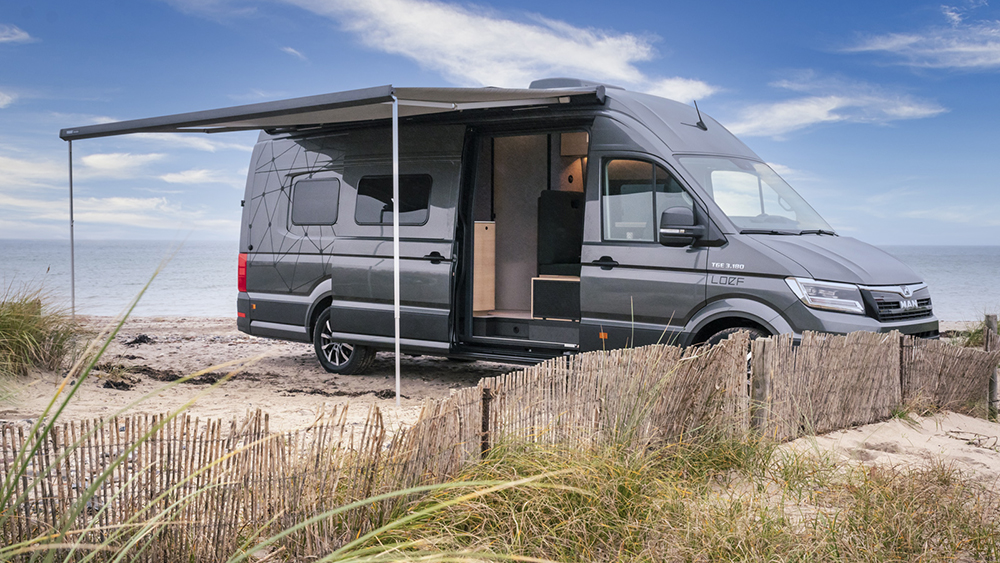 If you’re dying to recreate your own (decidedly more upscale) version of Nomadland, Loef has just the van for you.

The German outfit’s new luxury camper offers space, comfort, and the unbridled freedom to put down (temporary) roots wherever you desire. Based on one of the longest vans currently on the road—an extended MAN TGE—the Loef spans 24 feet from bumper to bumper and stands more than 9 feet high. This makes it larger than some Class A and C motorhomes. Despite its imposing size, Loef claims the 180 hp four-wheeler handles like “an agile big cat” even in the urban jungle.

Aside from performance and proportions, the camper has a stylish interior inspired by timeless Scandinavian design and high-end amenities to boot. The layout centers around two separate entertaining areas. At the rear, there’s a wraparound five-person sofa with an adjustable table. This area can open out for al fresco dining. When it’s time for sleeping, the table drops down and turns this space into a master suite with a bed that spans 69 by 77 inches.

The kitchenette and rear lounge.  Loef

The front, meanwhile, features a five-seat dinette with an L-shaped bench and another adjustable table. Similarly, this area converts into a sleeping nook designed for children featuring a traverse bed that measures 47 by 69 inches.

At the center of the camper is a well-appointed kitchenette with a four-burner Thetford stove and oven, plus a refrigerator and freezer. A few steps away lies the “wellness area” a.k.a. the flashy bathroom, which comprises an electric-flush cassette toilet, a mirrored cabinet and a ceiling-integrated rainfall shower with hand sprayer.

The Big Green Egg which can slide out from the rear.  Loef

To top it off, the Loef can accommodate posh tailgating. In addition to a table and chair set that can be erected underneath the awning, the camper comes complete with a Big Green Egg Mini Max ceramic grill that slides out the rear doors. It also features a chic cocktail bar, located just inside the passenger-side door, where one can make the requisite libations to accompany the barbecue feast.

As for power, the camper is equipped with a 100-Ah lithium battery, a 2,000-watt inverter and a 320-watt solar charging system. This is enough to power the appliances and the smart home control system, as well as a spate of USB and 230V outlets. Internet comes courtesy of an LTE antenna.

Loef estimates that camper builds will range between $130,000 and $150,000. Hey, nobody said the lavish nomad life was going to cheap.

Check out more photos of the camper below: