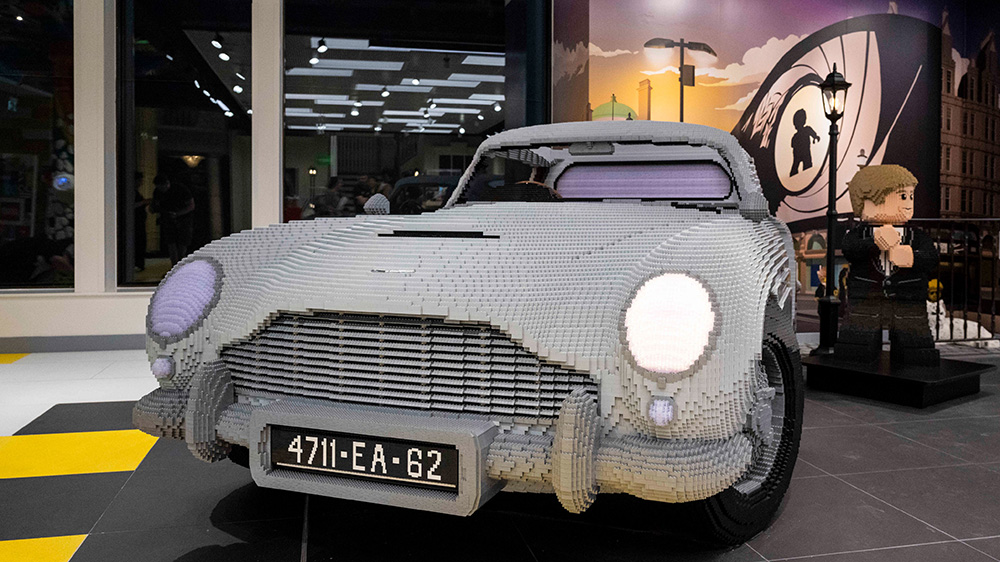 What better way to celebrate the revamp of London’s main Lego store than with a life-size model of the famous Aston Martin DB5?

The recently reopened Leicester Square shop—which is now the Danish toy company’s largest following the upgrade—has a slew of special exhibits currently on display, including a stunning recreation of James Bond’s vehicle of choice. The brick-made DB5 may not be capable of everything its big screen counterpart can do, but that doesn’t make the vehicle any less impressive.

A lot of time and effort were put into the Lego store’s Aston Martin. The entire model consists of 347,954 bricks and took an expert team of builders 1,366 hours (or the equivalent of nearly 57 days) to complete, according to a tweet from the British automaker. As you may have guessed, that many plastic bricks is pretty heavy. The London-based newspaper Metro reports that the giant toy car weighs one imperial ton, which works out to 2,240 pounds. Standing next to the vehicle is a nearly life-size version of the company’s iconic minifig outfitted just like the superspy.

The Lego DB5 also has some working parts. It’s not as detailed as one of the company’s Technic models—which sometimes come with functional gearboxes—but it does feature working headlights and and an illuminated instrument panel. Our favorite detail is one that will be familiar to anyone who’s seen any of the car’s eight appearances in the beloved spy franchise—a rotating license plate.

This isn’t Lego’s first experience with the legendary vehicle. Four years ago, the company released an extremely detailed model of the grand tourer as part of its Creator Expert line. The 1,295-piece set includes several Bond gadgets—like non-firing machine guns, wheel scythes and even a working ejector seat—and is currently available online through Amazon for $247.99. A smaller, less intricate DB5 model with its own Daniel Craig minifig launched earlier this month and is well-suited to anyone looking for a fun desk decoration. It can be yours for $19.97.