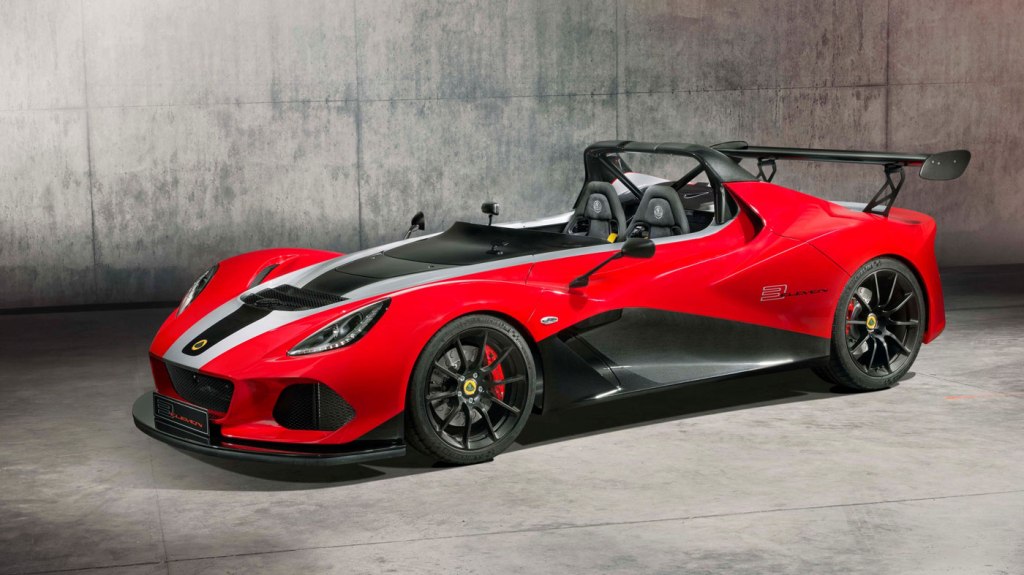 Lotus is bidding farewell to its stripped-out, extreme-machine track star—the much-loved 3-Eleven—after just 3 years of production. But it’s not going away without a fireworks finale.

The British sports-car maker has unveiled a final, limited-edition version that it is calling the 3-Eleven 430. It comes with increased power, lighter weight, improved aerodynamics, and the impressive claim that it is now the fastest two-seater to lap the sinuous Hethel test track at Lotus HQ.

As the 430 moniker suggests, the new 3-Eleven shares the 430 hp, supercharged 3.5-liter, Toyota-sourced V-6 found in the Lotus Exige Cup 430 road racer. That gives it a healthy 20 hp boost over the current 3-Eleven. The extra power helps thrust this 2,028-pound featherweight from zero to 60 mph in a mere 3.1 seconds and to a top speed of 179 mph. In comparison, the standard 3-Eleven boasts a 3.3-second zero-to-60 mph rate of acceleration and a 174 mph limit.

Subtle yet highly effective bodywork changes include a higher-mounted rear wing with re-profiled end plates, a new front splitter and lip spoiler, and a cleaner underbody with a revised rear diffuser. The result is a 97-pound increase in downforce—taking the total to 584 pounds—at the car’s V-max.

To ensure the new 430 stops as effectively as it starts, its AP Racing four-piston brake calipers now clamp new 13-inch, two-piece J-Hook–designed rotors at the front and rear. These are said to improve initial bite and reduce vibration under full-on braking.

Carried over is the 3-Eleven’s proven arsenal of Torsen-style limited-slip differential, Öhlins TTX adjustable dampers, Eibach adjustable anti-roll bars, Michelin Cup 2 tires, and Lotus’s near-mythical six-position variable traction control. The result is a car that can corner at a staggering 1.5 g and lap the 2.2-mile Hethel track 2 seconds faster than the original 3-Eleven.

But don’t expect any improvements to creature comforts with this latest version. As before, it comes minus doors, a roof, a windshield, carpets, and a stereo; it’s just two suede-covered race seats with full-harness race belts.