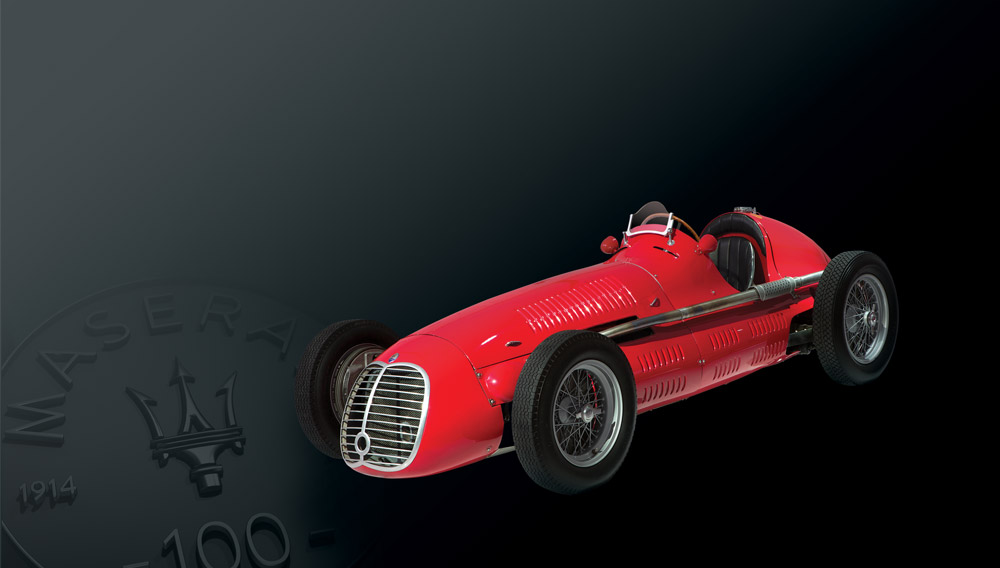 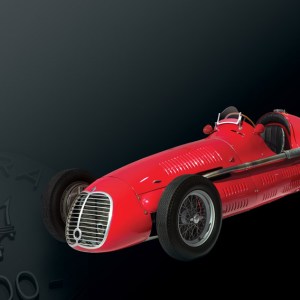 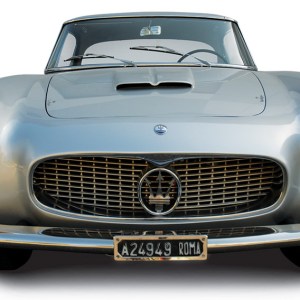 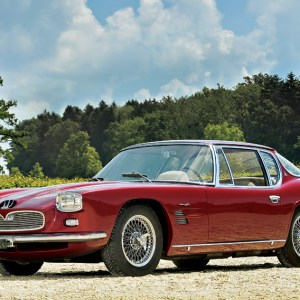 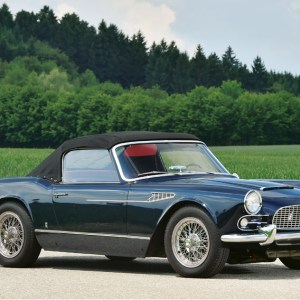 Maserati’s 100th anniversary is a milestone for the marque and its most passionate collectors.

So this is lidia,” Doug Magnon says, waving his arm at a silver Maserati in the center of the showroom that holds dozens of his cars. Lidia is a 1963 3500 GTI, the first Maserati that Magnon ever bought and one of the 30 he now owns. Lidia represents everything he loves about Maserati, from the grace of its engineering, to the power of its engine, to the personal touch of the autoworker who cared so deeply about the car, he emblazoned it with L-I-D-I-A—his girlfriend’s name, Magnon likes to think.

That name sat unread in the undercarriage for at least 45 years until Magnon bought the GTI in 1995, drove it home, and eventually started restoring it. He found the letters welded beneath the driver’s-side door. “It really inspired me that each one has its own character, own reason in history for being,” Magnon says. “All the people who were involved in the cars put their heart and soul into it.” Now Magnon does too—into Lidia and into a collection of Maseratis that has grown to be the largest in the country, with one of each production car ever brought to the United States.

Maserati turns 100 this year, and with that anniversary has come a renewed interest in the iconic Italian automaker. It will be a featured marque at the Pebble Beach Concours d’Elegance in August, and the company plans events around the world to celebrate the milestone. Magnon and other collectors welcome the chance to show what makes a car that has long lived in the shadow of Lamborghini and  Ferrari so special. In fact, one of Magnon’s cars, a 1951 A6G 2000 by Pininfarina, is in the Pebble Beach competition.

“The auction companies are certainly geared up for it at Monterey. We are on a very conscious level,” Don Rose of RM Auctions says of the Maseratis on offer at sales surrounding the Pebble Beach Concours. RM’s top lots on August 13 to 15 will include a 1963 Maserati 5000 GT with coachwork by Frua ($2.2 million to $2.9 million) and a 1959 3500 GT Spyder prototype by Vignale ($1.1 million to $1.5 million). “We have sought out some of the rarest and most precious models—some prototypes and special one-off, coachbuilt cars—in anticipation of a surge at Monterey.”

Maserati is rolling off of a series of strong showings. At the Villa d’Este Concorso d’Eleganza in Italy in May, a 1956 Maserati 450S owned by the Swiss collector Albert Spiess won best in show. Last year, a 1955 300S Sports-Racing Spyder sold for $6.8 million, a record for the marque. “They’ve been thought of as undervalued for a long time compared to Ferrari, which has become sort of the gold standard of this appreciating market,” Rose says. “The question was, until recently, are Maseratis going to be perennially undervalued, or are they going to have their day in the sun? They are clearly now having their day in the sun.”

That day has come after a long, stop-and-go history. Brothers Alfieri, Ettore, and Ernesto Maserati founded Maserati in Bologna in 1914. Looking for ways to improve the reliability of engines, Alfieri invented a new spark plug that used mica as insulation. Many innovations followed, from the way the brothers constructed the rear ends of their racecars to adapt to different tracks, to their 16-cylinder racing engine, to the famous “Birdcage” design—200 steel tubes welded together, which made for a chassis that was extremely rigid yet light.

Sales from the spark plug provided revenue as the brothers modified and repaired racecars before eventually building one of their own in 1926. Called the Tipo 26, it won the first race it entered. From there, Maserati forged a racing legacy that still resonates today, with its first world record in 1929 and dominance in the golden age of auto racing in Europe. Driving a Maserati, Wilbur Shaw won the Indianapolis 500 in 1939 and 1940, and Maserati grabbed the F/1 championship in 1954 and 1957, with Juan Manuel Fangio, one of the all-time great drivers, behind the wheel.

The company started selling road cars in 1947, and it focused on that end of the business completely after it pulled out of racing in 1957. But while Maserati took its cars out of the race, it did not take the race out of its cars. Enthusiasts say the company’s devotion to racing can be seen—and felt and heard—in every corner taken faster than drivers think they should. Magnon’s 1975 Khamsin, for example, remains a joy to drive nearly 40 years after it was made because Maserati learned from its racecars to put the engine tight against the firewall to achieve the proper balance between raw power and delicate control.

Geoff Sanderson, a Maserati collector in Tennessee, sees a direct line from the ingenuity that propelled Maseratis to victory to the engineering that makes it possible for his 17-foot-long Quattroporte to perform like a sports car with the comfort of a sedan on Tail of the Dragon, an 11-mile stretch of highway at the Tennessee and North Carolina border with 318 curves. “Muscle cars have always been stoplight-to-stoplight, drag strip–type things,” he says. “But life is not a straight line.”

The Maserati brothers sold the company in 1937 to Adolfo and Omar Orsi, and it has changed hands several times since then. The company endured a down period from the mid-1970s until the early 1990s, and Maserati abandoned the American market from 1989 to 2001. But Maserati, now owned by Fiat, has emerged to face its next 100 years as healthy as it has ever been.

The company rolled out the Quattroporte VI to favorable reviews last year and plans to start selling its first SUV next year. Drew Alcazar, CEO of Russo and Steele Collector Automobile Auctions, says strong new releases bring attention to vintage models,  “illuminating things they’ve done in the past.” Maserati expects to sell 35,000 cars this year and is aiming for 75,000 by 2018—figures unthinkable just a few years ago. Still, that is a small number relative to most marques, and Maserati will never be a mass-production machine.

Maserati’s v-8 engines create a deep, throaty growl, with a hint of a sports car’s high-pitched whine. And when Magnon shows off his collection, he fires them up, one at a time. Each one is slightly different, like the god of automobiles singing scales. He moves through his warehouse adjacent to the Riverside International Automotive Museum in Southern California, which he founded. Magnon has an unwavering devotion to authenticity. It baffles him when someone paints a car something other than its original color. A few years ago, when he found out the carpet that lines the floors of older Maseratis was no longer available,

he commissioned a loom to re-create the exact pile.

His 1963 Quattroporte is a stunner. But when he found it, the car had sat unused for more than a decade, as its previous owner had decided against fixing its brakes and let it languish. As Magnon restored it, he learned the car had once been painted two colors—blue on one side, cream on the other—so when it was put on a carousel at a car show, buyers could get an idea of what each color looked like. The half-and-half paint job also allowed the media to get shots of a blue car and a white car while only photographing one. The QP still makes a good story: The fastest sedan of the 1960s, it carried Maserati’s first production V-8 engine and was the first four-door vehicle Maserati ever made. Around the same time, Ferrari and Lamborghini toyed with the idea of making a four-door. “But at the end of the day, neither dared cross the line,” Magnon says. There were only a few hundred made that year, and according to the Quattroporte registry, Magnon’s is the oldest one in the world.

Next he stops at the brilliant yellow Khamsin. He cranks the engine, lets it warm up for a minute. As he sits in the seat, door open, left leg on the showroom floor, right leg tapping the pedal, the Khamsin awakens into a snarling temper tantrum. This baby is heading out for a ride. Magnon coasts out of the warehouse and into the sunlight, gently maneuvering out of the parking lot and into the street—where he is not so gentle. The car leaps from zero to 60. “The performance of this car,” Magnon says above the engine, “stands up to any contemporary car of today.”

To prove his point, at 70 mph, he steers with only two fingers on the wheel and the toes of his flip-flops on the gas, brake, and clutch. Brakes are usually only worth mentioning when they do not work, but the Khamsin’s brakes catch like a fall into a hammock. Sixty to zero is as much fun as zero to 60. Well, of course not. But the brakes really do work nicely.