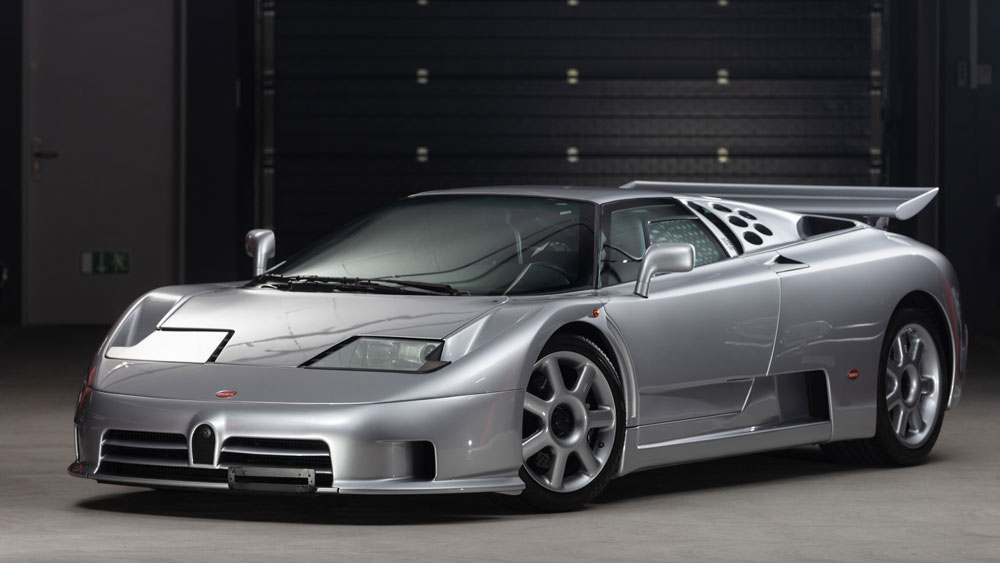 Only in the rarest of circumstances, like when a 1962 Ferrari 250 GTO sold for $48.4 million at RM Sotheby’s Monterey auction in 2018, does a collector car’s accrued mileage not factor into its value. Most of the time, the extent to which a car has been exercised over the course of its life has at least some impact on its desirability. Fewer miles means greater value. It’s as simple as that.

Every now and then, however, a sought-after collector vehicle (typically a contemporary model) rolls across the auction block with so little on-road experience that its preserved “newness” becomes a focal point. When RM Sotheby’s hosted its 6th annual Paris auction last week, more than a dozen modern-day classics fitting that description were offered for sale. With rested engines and slim odometer readings, some of these vehicles inspired impassioned bidding. The following three examples provide a good cross section of the intriguing low-mileage marvels that exchanged hands in Paris.

Bugatti may be famous today for its multiple iterations of the Veyron, as well as the Chiron, the brand’s fastest and most powerful supercar to date. More than 30 years ago, however, Ferrari dealer Romano Artioli attempted to resurrect the hibernating French brand. In 1987, he built a technologically advanced manufacturing facility just north of Modena, Italy, and four years later, the Bugatti Automobili SpA team unveiled a new supercar, the EB110, to commemorate what would have been Ettore Bugatti’s 110th birthday that year.

Less than 12 months later, the recently resuscitated manufacturer debuted a Super Sport version. Capable of sprinting from zero to 60 mph in less than 3.2 seconds, and peaking at 220 mph, the variant outperformed the Ferrari F50 and Porsche GT1—and while the McLaren F1 boasted similar performance capabilities, the EB110 SS was even more exclusive. “Only 33 were produced,” says Nick Wiles, a car specialist with RM Sotheby’s, concerning the SS variant. “It was the ultimate edition of the EB110 and the start of Bugatti’s revival.” The 1994 example that crossed the block in Paris was driven only 916 kilometers (about 569 miles) and sold for about $2.3 million.

When Volkswagen purchased the Lamborghini brand in 1998, the Italian sports car and supercar manufacturer was in need of a spark. Following the production run of its Diablo—a model plagued by reliability issues and build-quality inconsistencies—Lamborghini required a catalyst that could slingshot the company back to high-performance, luxury sports car relevance. That catalyst came in the form of the Murciélago, which debuted in 2001.

Five years later, Lamborghini unveiled the LP640-4, a more powerful iteration that improved upon the original coupe’s capabilities thanks to increased engine displacement. It also benefited from a restyling of some of the original model’s body panels and showcased asymmetrical side air intakes. The 2009 Lamborghini Murciélago LP640-4 Coupe presented in Paris features an optional E-Gear paddle-shift transmission and is bathed in a bold orange-and-black color scheme—an appropriate motif for a brand known for its aggressive styling.

Most examples of this model have twice as much mileage.  Photo: Courtesy of RM Sotheby's.

Surprisingly, given the LP640-4’s abilities on open roads, this particular example was driven less than 5,000 miles over the past decade. “This does represent somewhat of a rarity,” Wiles says, explaining that most examples that come up for auction are offered with at least twice as much mileage on their odometers. Partially for that reason, the car exchanged hands for roughly $221,000.

If you missed out on your chance to buy a Mercedes-AMG G 65 Final Edition when the German automaker began accepting orders for the limited-edition vehicle—a likely scenario, considering only 65 examples were built—the RM Sotheby’s auction in Paris offered you another opportunity to get behind the wheel of the exclusive W463 G-Wagen. Painted black with matte bronze wheels, and featuring an interior swathed in napa leather and carbon-fiber trim, this luxuriously appointed sport-utility vehicle offered through the auction house remains in brand-new condition.

Only 65 examples were built.  Photo: Courtesy of RM Sotheby's.

With only delivery mileage on the odometer, it sold for approximately $318,000. “Many limited-production models command a premium,” says Wiles, “and with this example being a ‘Final Edition,’ it’s also the last of the legendary, first-generation G-Wagens.”