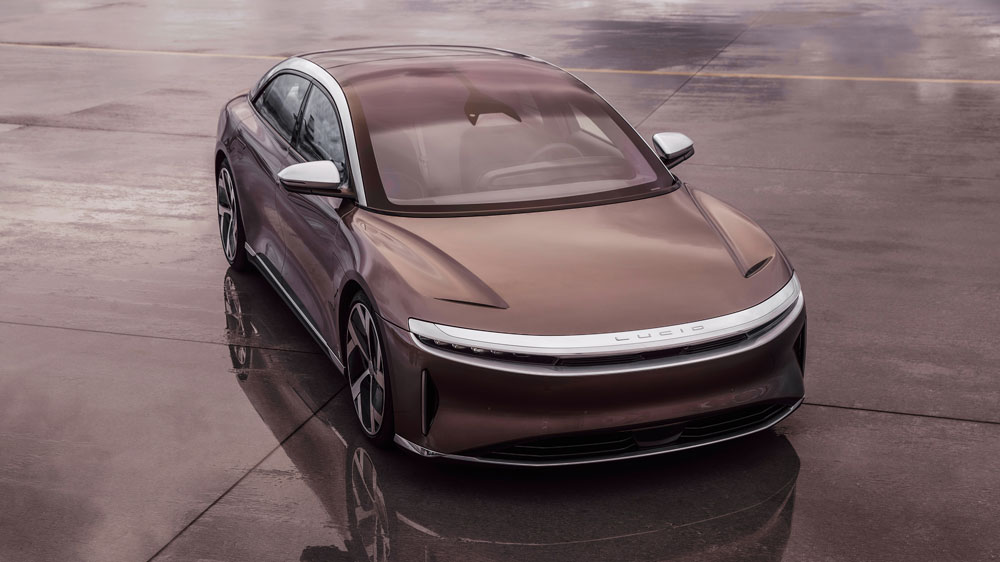 Silicon Valley-based Lucid Motors has revealed its first production car, the all-electric Air sedan that boasts a stunning design, luxurious materials and industry-smashing specs. We first saw the Air in concept form nearly three years ago. Since then, many electric-vehicle startups have come and gone, with fellow Silicon Valley marque Byton falling into the latter category, at least for the moment, having suspended operations in June. But Lucid has managed to survive and even expand during a months-long pandemic and resulting economic downturn.

The Air achieves the most range of any electric production sedan thanks, in part, to its 113 kWh extended-range battery pack and what’s claimed to be the lowest drag coefficient of any current production vehicle—a slippery 0.21 Cd, beating out all Tesla models and usurping the Mercedes-Benz A-Class. At the same time, the Air’s compact and efficient power train allows it to offer the space of a long-wheelbase S-Class with the footprint roughly equivalent to that of the smaller E-Class.

“A lot of people obsess over the battery,” Lucid CEO and CTO Peter Rawlinson told us while explaining how his company achieved such impressive figures with its proprietary drivetrain technology, developed in-house. “That’s super important, but it’s really the whole system big-picture. It’s every little detail: aerodynamics, the electromagnetism, how we cool the battery, everything.”

Rawlinson should know a thing or two about electric cars—he was the chief engineer for the Tesla Model S. Before that, he served as chief engineer of advanced engineering at Lotus Cars in the UK. And Rawlinson’s VP of manufacturing is Peter Hochholdinger, formerly Tesla’s VP of production and once the senior director of production at Audi. In other words, Lucid execs have some serious street cred.

The interior features sustainable fabrics and woods and comes with the option of leather or non-animal upholstery.  Photo: Courtesy of Lucid Motors.

The first Air model will be the all-wheel-drive Dream Edition (starting at $169,000), powered by two permanent magnet electric motors—one on each axle—that churn out a combined 1,080 hp and launch the car from zero to 60 mph in less than 2.5 seconds. Lucid says the dual-motor Air can consistently run the quarter-mile in 9.9 seconds, the only electric production sedan to break the sub-10-second barrier. By comparison, the Porsche Taycan Turbo S does the same run in about 10.4 seconds, with reported times varying slightly.

With the optional extended battery pack, the Air has a range of up to 517 miles and uses an ultra-high, 900-volt onboard charging unit that can charge the car up to 300 miles in 20 minutes when connected to a DC fast charger. Later on, Lucid plans to offer the Air in a single, rear-drive configuration that a company spokesperson tells us will start at less than $100,000. At Lucid’s Beverly Hills showroom, Rawlinson also showed us a chassis fitted with three motors—one in front and two in the rear—but Lucid isn’t confirming a tri-motor option just yet.

The Air can rush from zero to 60 mph in less than 2.5 seconds.  Photo: Courtesy of Lucid Motors.

As important as the Lucid Air’s engineering accomplishments is its elegant design, boasting high-quality, sustainable materials and finishes. “We feel that luxury is shifting,” says Derek Jenkins, Lucid’s vice president of design. “Progressive consumers don’t really care about legacy and tradition, they care about technology and experience and sustainability. So we knew we had to find this nice blend of something that was future-facing but still had an elegance to it, a human component to it. But, also, it couldn’t be so futuristic that it is shocking. We’re not after Blade Runner.”

Jenkins tells us the production car is nearly identical to the concept we saw a few years ago, with some subtle surfacing changes and modifications to meet regulations. “We’re really excited about the basic architecture of the car. It’s low, it’s wide, it’s a reasonable length—so that makes it more than a sedan shape, it’s really kind of a coupé sedan, yet it’s incredibly spacious.” Jenkins points out favorite design cues including the metallic blades on the front as well as the metal roof architecture, which allows for an expansive glass canopy that bathes front and rear seats in natural light.

Inside, the Lucid Air has perhaps one of the best examples of a digital instrument panel on a current production car, with wide “floating” screens that look modern but not overwhelming. “The car has a lightness about it which is indicative of what we call ‘post-luxury,’ as opposed to this legacy of heaviness,” Jenkins explains. Several interior color combinations are available, all named after iconic California locales, such as Santa Monica, Mojave, Big Basin and Tahoe. Each is a harmonious blend of sustainable fabrics and woods, with a choice of leather (Lucid’s leather supplier, Bridge of Weir, boasts the lowest carbon footprint of any leather supplier in the industry) or non-animal upholsteries. Strategically placed throughout the cabin are several small emblems of the California grizzly bear, whose likeness appears on the Golden State’s flag.

The driver benefits from wide “floating” screens that look modern but not overwhelming.  Photo: Courtesy of Lucid Motors.

Despite its California roots, the Lucid Air will be built at the company’s factory in Casa Grande, Ariz., with production starting at the end of this year. Lucid will follow Tesla’s direct sales approach, beginning with 20 retail studios and service centers in North America by the end of 2020, including ones in Miami and New York City, as well as the company’s headquarters in Newark, Calif.

An example of a Lucid retail studio, of which 20 are planned for North America by the end of the year.  Photo: Courtesy of Lucid Motors.

In addition, Lucid is launching a mobile fleet of service vans which will assist customers on the road or in locations without a brick-and-mortar service center. Reservations are currently being accepted in the US with a refundable deposit of $1,000, and Lucid has also opened a waitlist for prospective buyers in Europe and the Middle East.