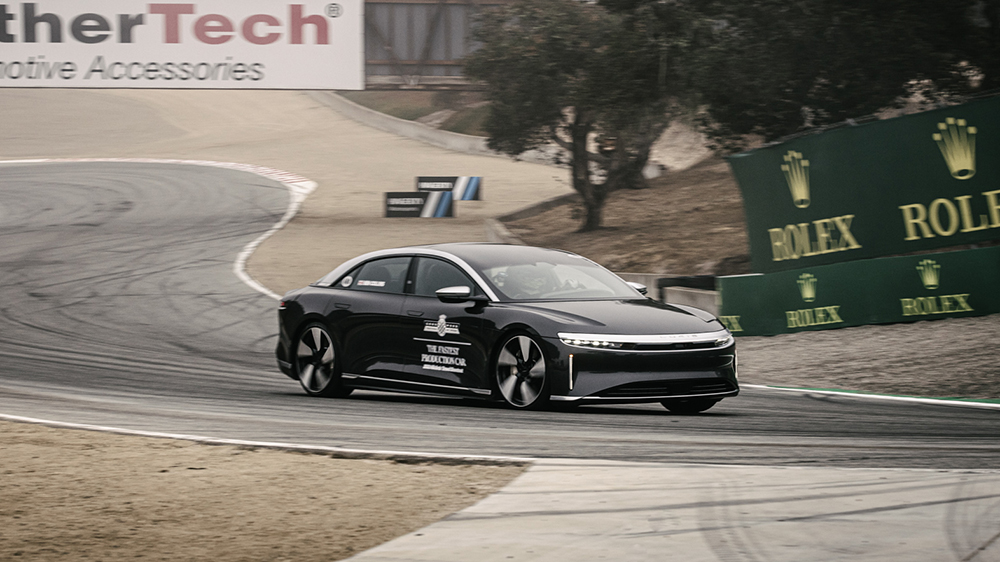 The concept was simple: reverse course at WeatherTech Raceway Laguna Seca and have cars compete in a timed hillclimb up the legendary corkscrew, rather than down it, requiring a three-dimensionally adept racer’s mind to address the five-and-a-half-story drop backwards.

The reality yielded a surprise standout from a Silicon Valley EV startup—the Lucid Air Grand Touring Performance, which happens to be the very car that scored the fastest production car run at the Goodwood Festival of Speed hillclimb last June, achieved the quickest time of any production car at the inaugural timed sprint in Monterey.

With two motors producing a robust 1,050 hp, the five-seat sedan is wickedly quick in any scenario, particularly one where instant torque response and zero shift times are rewarded richly. For some perspective, the Air’s 38.89-second run beat a seven-figure Ferrari LaFerrari by nearly six seconds.

And in case you were wondering, the only vehicles quicker than the Lucid were a Porsche 908 race car, a Lotus Formula 1 race car, and a Porsche 911 remastered by Gunther Werks on racing slicks and piloted by Patrick Long—stiff competition that can’t compete with the Air Grand Touring Performance’s $170,000 starting price.

Video of the run, which can be seen above, gives an impression of the outright performance required to achieve the feat. But perhaps the biggest surprise lies in the fact that the model, which was driven in anger by Ben “The Stig” Collins, is not Lucid’s most potent weapon.

That honor goes to the just-unveiled Sapphire model, whose three-motor, 1,200+ horsepower setup will hit zero to 60 mph in under two seconds and reach a top speed in excess of 200 mph. The model’s carbon ceramic brakes should also make it better suited for track duty, which we suspect it will begin tackling closer to when it goes into production during the first half of 2023.