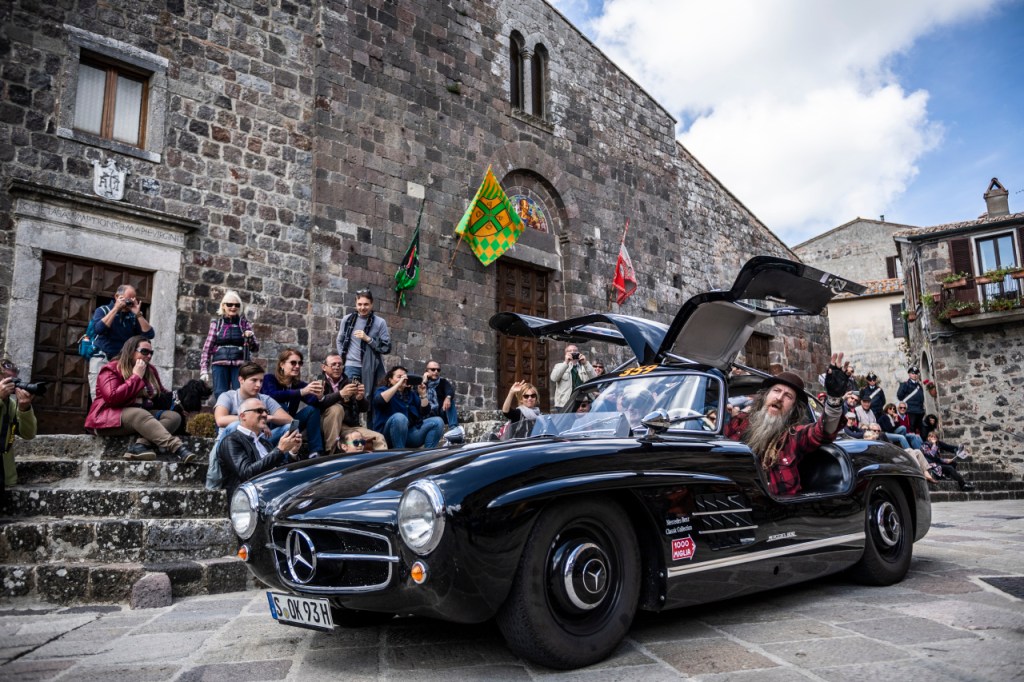 Magnus Walker exploded into the gearhead zeitgeist with the 2013 release of his Urban Outlaw video. The highly cinematic clip showed the flannel bedecked Brit tooling on air-cooled Porsches from his downtown Los Angeles garage, musing on the timeless silhouette of the 911. Much has happened in the half decade since, but Walker’s profile in the automotive world has only grown. While widely associated with Porsche (more specifically, 911s and 930s), Walker just returned from running the Mille Miglia in a Mercedes-Benz with Robb Report following close behind.

The Porsche collector and customizer spent four days crisscrossing Italy as part of one of the world’s most famous rallies; doing so in a pristine 1955 300SL Gullwing. It’s an unforgettable and, at times, harrowing event, where three hours of sleep, wild police escorts through urban centers and breakneck speeds in cars that are more than 60 years old are the norm. Notably, the lanky, heavily bearded and dreadlocked car connoisseur seemed to draw the biggest and most enthusiastic crowds, no matter what tiny Italian village he pulled into. It seems Walker, who just became an American citizen, is becoming as well-known as his vehicles.

Magnus Walker wants you to get out and drive.  Photo: Courtesy Daimler AG.

What did you think of your first Mille Miglia?

I think of the Mille Miglia as an adventure, an epic drive, my type of drive. Some would call it spirited. Everyone told me it was so hard, so difficult, the days are long. That is true. I don’t know if it is different for others, as this is my first year, but what really surprised me was how much traffic is out there, which proves to be challenging because, of course, you don’t want to wait in line behind 50 cars to go to the roundabout and repeat it for the next 10 kilometers. I always talk about adapting to the environment, and to adapt to the Mille Miglia you have to become a bit more of an aggressive driver if you want to get somewhere on time.

You’ve gotta be comfortable with driving down the center of a narrow road with traffic coming straight at you. The thing with the Mille Miglia is you never really know what’s around the corner.

Would you describe it as an exhilarating but exhausting four days?

Yeah. To me, a thousand miles stretched across four days is not a big deal. I’m like, how can this take so long? How can it be 12- to 14-hour days when you are barely doing 300 miles a day? I can grind 300 miles out in five or six hours in California. But there were sections that were super fun and spirited—the hill climb section for instance. To me, it was about getting into a rhythm, running your own race.

I think it breaks down into a couple of categories: the diehard rally types that have done all the homework and decide to be very competitive. And then the opposite, which was [girlfriend] Hannah and I who never read the rule book. We didn’t really stress the logistics or the mathematical end of it; we were there more to enjoy the journey.

Have you done a lot of specialized vintage rallies?

No. I’ve done a lot of track days and wheel-to-wheel racing. I did a rally last year with Mercedes-Benz—the Silvretta Classic in Austria—in the same car. It was all sort of Alpine mountain roads, which we didn’t really see a ton of on the Mille Miglia. So, it was the second time within a year that we drove that exact car—the ‘55 gullwing, the black one. Essentially, that’s an easy car to drive once you get around what I would call the limitations of the car. Number one being the brakes—you know, I’m used to early, nimble 911’s that stop on a dime. But we did well over a thousand miles in four days and we never felt beat up in that car, never got out of it with an aching back. It’s easy to drive, comfortable at speed—an intoxicating car in the sense that it’s dramatic.

What was your favorite aspect of the Mille Miglia?

I think one of the highlights for me was the people. If it wasn’t for the people lining the course it would be nothing special. They really spur you on when you’ve been behind the wheel for 12 hours and maybe you’re ready for it to be ending. When you drive into the little villages and there’s people constantly cheering, especially when we put up the gullwing doors, they give you energy to give it a little bit more effort. I would say, as a first-time participant, it’s the people that are the greatest thing about it.

Would you do it again?

Yeah, I’d do it again. There’s a sense of achievement to it. With the rally coming up on a hundred years old pretty soon, it just feels like something that doesn’t really exist anywhere else. I’ve never done the Gumball or Bull Run, but those don’t fall into the same category as the Mille Miglia, because of the cars that are there. We were all driving in luxury in the ‘55 Gullwing compared to when you see people driving in 1920 Bugattis and Bentleys in the rain. Those guys are the real heroes right there. That could not have been fun; driving all day in the rain in those open cars.

How did the Gullwing behave?

That car was super advanced for being 65 years old. The second gear is really effective. Those sprints up to the roundabout, downshift to second, around the roundabout, back on the gas, run it up to almost a redline, grab third gear—we repeated that a lot of times.

And the terrain was not necessarily the smoothest, and that car never missed a beat. Never leaked oil, shifted great. We were going over a lot of cobblestones, and if we were going over that in one of my early Porsches, it’s like a washboard, we would have been pretty beat up. That Mercedes Gullwing is just an awesome GT, an everyday usable supercar.

You’re famous for an association with Porsche. Is there any dissonance when you drive another brand?

I’m all about variety. The joke I’ve heard at least a hundred times is, ‘Why are you driving a Mercedes, aren’t you the Porsche Guy?’ My standard answer became: ‘I’ll drive anything from Stuttgart.’ But I’ve always said my motto is Get Out and Drive. Porsche is my drug of choice; most people know that. It’s my religion. I’ve owned a lot of non-Porsche cars. I’d be a fool to turn down a drive in the Mille Miglia in a Gullwing Mercedes. It is about unique experiences, iconic cars. I’m an enthusiast.