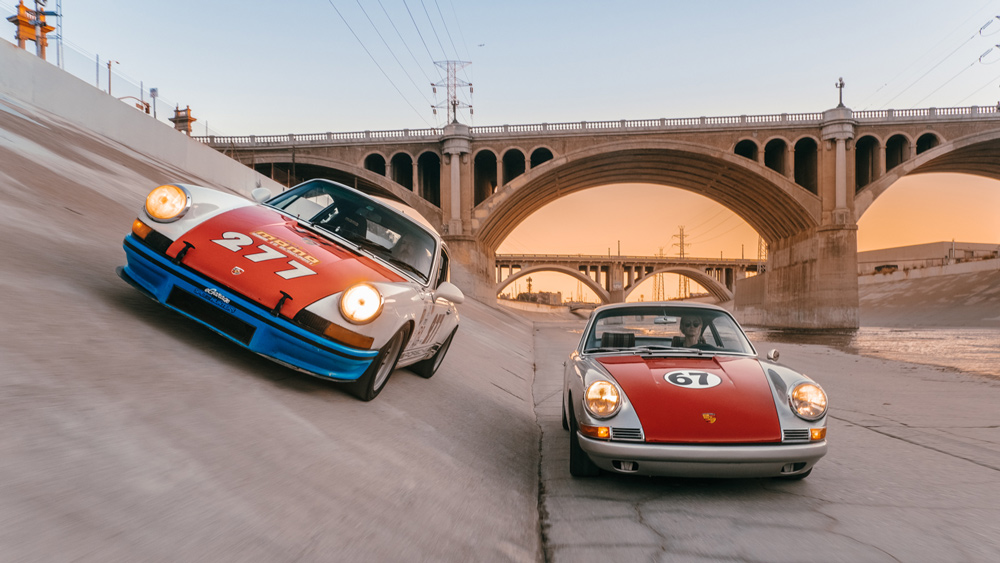 Photo by Daniel Malikyar, courtesy of the Santo Gallery.

The automobile-as-art is not a new concept, whether considered as kinetic sculpture in itself or as muse for other mediums. What happens, though, when two creative mavericks team up to reframe the subject with a new perspective? This morning, Santo Gallery premiered “The Magnus Walker Series,” a new collection of prints that celebrates urban racing in the City of Angels. The exhibition, viewable online, is the culmination of a two-month project undertaken by acclaimed photographer Daniel Malikyar and Magnus Walker, the longtime Porsche restorer and a contemporary master of custom builds.

The duo recently shared with Robb Report exclusive insights into how the partnership developed as well as their process, which included eight cars and five different locations—all done without permits or any official approval.

How did the two of you meet, and what sparked your interest in working together?

Magnus Walker: I first met Daniel on a Fuji shoot that he was producing and directing. My segment on it was a pretty cool downtown LA shoot at night, something I love to do. I was driving in my ‘75 ice-green metallic Turbo and we had a really epic shot at Lower Grand [Avenue] that involved a drone. Everyone has filmed Lower Grand. It’s a common location which always looks great but, if anything, is overused and everyone tends to do the same shot. But the creativity that Daniel brought resulted in a shot that had never really been done; the drone dropped down, went up and dropped back down again while following the car at speed. I realized that he thought outside of the box.

Daniel Malikyar: The profile for Fujifilm was about the different creative subcultures that existed in Los Angeles, which is this amazing cultural hub that’s got all kinds of different aspects that influence basically every pop culture segment around the world. And car culture is a huge pillar of that. I had seen some of Magnus’s work online and it didn’t really feel like there could be a better person to represent that culture in this piece. The whole concept behind his segment was pairing his against-the-grain mentality with a really iconic location. The collaborative process was seamless. Magnus gets it, he’s an artist himself. We pulled off the shot and it ended up actually going viral online. I think it was the number one cinematography clip on Reddit for a week. That was how this next project started and evolved.

My work really focuses on exploring the deeper meaning behind various subcultures around the world. I’ve traveled through the favelas of Rio de Janeiro to the streets of Kabul. I’ve always been fueled by going to extreme lengths to share uncommon stories and have them stick out in today’s culture of oversaturated media, especially with photography.

Magnus, you’re an artist on multiple fronts, but what’s your approach to custom builds?

I build what I like to look at and like to drive, and enjoy the process. I’m not defined by having to create a specific build. For me, it’s a hobby and not a business, so I’m not making customer cars. I have the freedom to only answer to myself when it comes to aesthetics and timeline. I don’t have to monitor anyone else’s expectations except my own.

The last thing I did was a 993 art car, and the one before that was a 914 art car, which essentially was a three-day makeover with little more than $500 worth of materials. It went on to be featured at the SEMA show, which is mostly about big-dollar, high-sponsor builds. The car is just the canvas through which I choose to express myself, and the approach is pretty organic.

Describe the creative process behind the exhibition opening today at the Santo Gallery.

DM: The intention was capturing the fine art of urban racing in a way that hadn’t been done before. It really began with Magnus’s expertise behind the design, the story, the importance of each car and the pulse of the city at large, combined with my vision on how we could capture the cars in a unique way and really bring that to life. The “go-with-the-gut” mantra that Magnus has was the ethos for the series. There were times where we came into a location with four different ideas and ended up improvising. Often, a shot that we didn’t fully plan turned out to be the strongest.

Which image proved most challenging or memorable to create?

MW: The most challenging one involved getting into the LA River; not so much getting in the river but getting my 277 [1971 Porsche 911 T] and my ’67 S [1967 Porsche 911S] on the very steep concrete banking. The inspiration came from Grease and the infamous car-chase scene down there. I’ve gone in the LA River quite a few times, I’ve taken my 928 there, I’ve gone in there with a couple of Rolls-Royces, believe it or not, but I’ve never taken my favorite car, the 277. I had never seen a Porsche on the banking, it’s at least 35 degrees, and my car is super low, super stiff and doesn’t have more than two inches of ground clearance. Just stepping out of the car and then trying to close the door was quite challenging. It really is the standout shot.

Fine-tuning one of the most challenging images to capture for the series.  Photo by Daniel Malikyar, courtesy of the Santo Gallery.

Then, there are the three [Porsche] Turbos. I always love having Turbos together and we got super lucky with that one. We were shooting at Elysian Park, but by the time it opened there were people jogging and, because we were not doing road closures, we had to work within the public safety aspect. But the really cool thing about the Elysian Park photo is that we managed to capture a moment when the mist rolled in, and it’s got a very Apocalypse Now–type vibe with the three Turbos in motion, palm trees in the background and a bunch of fog. The fog made it epic.

A Porsche triad roaming through Elysian Park. (This image has been cropped from its original, vertical format.)  Photo by Daniel Malikyar, courtesy of the Santo Gallery.

How did you decide which cars to include?

MW: I suppose they’re my current favorites, or cars that I just thought would work. The slant-nose 911 was Daniel’s idea. His concept for it was something I actually hadn’t thought of. The slant-nose is a pretty obvious one to shoot, but to have my dog Willow jump out of the window of the car is something that hasn’t been done.

Walker’s dog, Willow, caught making an exit from a 911 slant-nose.  Photo by Daniel Malikyar, courtesy of the Santo Gallery.

How did the Santo Gallery start, and what is its mission?

DM: The idea for it actually came three years ago, when my girlfriend and I moved into our first space together. I was just coming off the road after traveling the world constantly and documenting those experiences. It was a stark change for me to be in one place and surrounded by white walls—it just really didn’t feel like home. We decided to get images up from some of our favorite places but I wanted to make sure that, if they were printed, they were represented properly. So we dove into this world of fine art printing and the specifications behind it. We got several framed pieces up in the house, and every time people came over they were blown away by these images and wanted to get them up in their spaces.

Life imitates art as Walker poses with a print from the series while on the location of another shot.  Photo by Daniel Malikyar, courtesy of the Santo Gallery.

When you’re looking for cool pieces for a modern home or office, there really isn’t an abundance of options online. We really wanted to create something new that catered to this problem, and are focusing on building out more series such as this one.

Are the two of you planning future projects together?

MW: For sure. I really enjoy working with creative people that inspire me to push the boundaries of comfort, style and concept. I’ve shot a lot of car stuff, and there’s only a handful of projects that have really stood out as being unique. This is one of those.

DM: That’s spot on. Both of us are passionate about what we’re creating and really go all-in on it. For this, we had the goal, we worked towards it, achieved it and now it’s ready to be put out into the world. I’m excited to see how it’s received.

The images, limited to 100 examples each, are now available for purchase in five sizes through Santo Gallery.