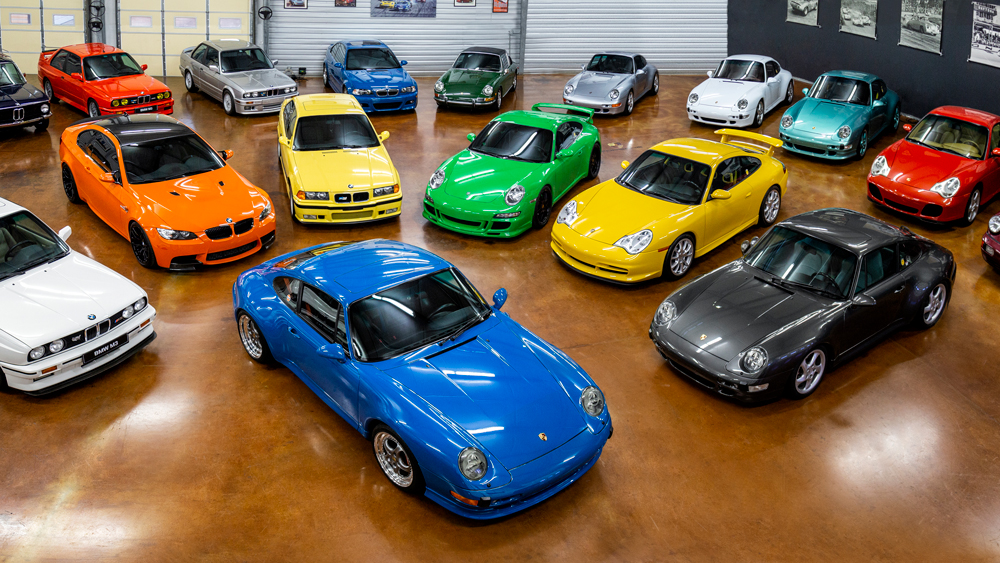 Rudy Mancinas, who passed away in 2021, amassed an impressive collection of cars, including 18 Porsche and BMW examples to be offered without reserve by Gooding & Company during its Amelia Island Auction on Friday, March 4. Mancinas made a careful selection of vehicles when it came to his collection, and many represent the evolution of later Porsche 911 and BMW M 3-Series models, in colors that range from mild to wild. Occasionally, the cars were “Rudyfied” with personal touches and tasteful modifications, such as colored brake calipers and badge accents, to make the appearance of each vehicle unique.

At one chronological end of his Porsche collection is a rare 1968 912 Soft-Window Targa in Irish Green, while at the other is a 2008 997 Carrera S in striking RS Green. Also noteworthy is a 1990 964 Carrera 4. That series, launched in 1989, looked similar to the outgoing 911 Carrera, with only smooth bumper caps and a then-unpopular wheel design outwardly distinguishing it from its predecessors. Yet the 964 was 80 percent new under its skin.

Porsche’s 912 was the 911’s little four-cylinder brother, and this 1969 Soft-Window Targa version is the rarest of the breed.  Photo by Mathieu Heurtault, courtesy of Gooding & Company.

Drivers welcomed the greater power and improved handling of the 964, which was replaced by the 993 series in 1995—a whole new 911 with a revised and much-improved engine, gearbox and rear suspension. Harm Lagaay (Porsche’s veteran designer who first penned the script on the side of the Carrera RS in 1973) restyled and updated the body, most readily identified by its flatter headlamps.

Acknowledged as Porsche’s air-cooled masterpiece, the 993 was built from 1994 to 1998. By the end of its production run, its engine had grown from the original 1964 911’s 2.0-liter flat-six to one with 3.6 liters of displacement, developing 282 hp in naturally aspirated form. Of the 993-series 911 Carreras, the auction house is presenting a wide-bodied Carrera 2S in luminous Ocean Jade Metallic, and an all-wheel-drive Carrera 4S in vibrant Blue Turquoise—both 1997 models and highly desirable, especially in such rare colors. Preferred by some (like this writer) over the 400 hp Turbo model on which they were based, both are essentially identical to the Turbo, save for their non-Turbo engines, and in the case of the 2S, the possession of smaller brakes and only rear-wheel drive.

This 1997 Porsche Carrera 2S is an example of the most elemental of the 993-series wide-body cars.  Photo by Josh Hway, courtesy of Gooding & Company.

By 1999, the water-cooled 996 series came to market and caused great consternation among Porsche enthusiasts who, at the time, maintained strict abstinence from engine water. It’s been a water-cooled Porsche world ever since. Connoisseurs doubtless regard the 993 as the ultimate 911, understanding that just because the water-cooled cars that followed are better cars, they are not necessarily better expressions of the original 911 concept.

And because Porsches and BMWs share many of the same garages, not to mention enthusiasts, note should be made of eight exceptional machines from Munich that belonged to Mancinas. Along with a 2013 BMW M3 Lime Rock Park Edition in Fire Orange, there will be five candy-colored examples of the BMW E30, E36, E46 and E92 generations of the M3, a model that dominates the collection.

This 1974 BMW 2002 tii is an example of the boxy model that put the Bavarian carmaker on the map.  Photo by Josh Hway, courtesy of Gooding & Company.

But perhaps among the most important examples from the Bavarian automaker is a rare 1973 BMW 2002 tii Touring and a 1974 2002 tii, the latter in Atlantic Blue. Debuted in 1968, the 100 hp box that is the 2002 model essentially “started it all” for BMW’s presence in the US, and was the catalyst for the marque’s growing stature.

Gooding & Company’s auction will take place at the Omni Amelia Island Resort at 11 a.m. EST. Bidding will be accepted in-person, online and by phone.