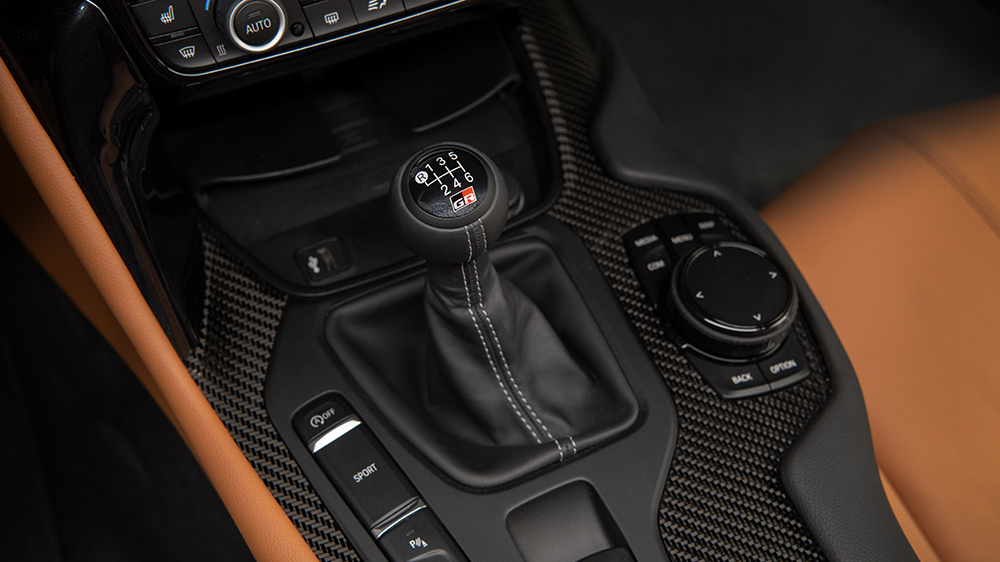 It was around the middle of the last decade that Alan Macey realized just how bad things had gotten for the manual transmission. The clutch pedal had started to disappear from American-made vehicles before he was born, but suddenly a stick shift wasn’t even available as an option on a muscle car like the Dodge Charger. So, in 2015, he started The Manual Gearbox Preservation Society.

The group is made up of the kind of drivers who believe physically shifting through the gears is as important to driving as putting your foot on the gas or turning the steering wheel. Macey isn’t that dogmatic—his garage is home to both a manual and an automatic—but the longtime car lover and industry veteran is concerned by how automated driving has become.

“I grew up in the rural suburbs of Detroit. I spent a lot of time driving Jeeps and smaller cars on those back roads and just having a lot of fun,” Macey told Robb Report. “If I was to make an observation as to how cars have evolved in my life, it’s that they’ve become increasingly less engaging.”

Macey is under no illusions. He knows the manual transmission isn’t going to experience a sudden surge in popularity. At the beginning of the 1980s, the percentage of cars rolling off American production lines with a stick shift was just 35 percent, according to The New York Times. In 2020, that number was barely over one percent (or about 188,000 cars)—which might explain why only 18 percent of the country’s drivers even know how to operate one. But Macey isn’t picking out a suit for the manual gearbox’s funeral, either. In fact, the growing popularity of EVs—many of which are being sold on the promise they’ll further automate the driving experience—has actually given him renewed optimism for the manual transmission.

“I think it was in the ’70s when quartz watches came out,” he said. “And there were probably a lot of people who thought Swiss automatic watches were going to just be a thing of the past. That even came up more recently with the Apple Watch. But I think that we’re all pretty well aware that the luxury [mechanical] watch industry is very much alive and thriving.”

If you know anything about how EVs work, chances are you’ll think Macey’s hope is misplaced, mainly because one of the main selling points of an all-electric powertrain is that it doesn’t need a multi-gear transmission to function. Unlike an internal combustion engine, which has a narrow RPM range at which it can operate efficiently—the reason why you need to shift through the gears to stop it from stalling—an electric motor has a much wider optimal range that requires just a single gear. This is why nearly every EV comes with a single-speed direct-drive transmission.

But there are exceptions. Take, for example, the Porsche Taycan. Introduced in the fall of 2019, the German marque’s debut EV is a true high-performance vehicle capable of rocketing from zero to 60 mph in 2.6 seconds and hitting a top speed of 161 mph. But what’s really caught the eye of some enthusiasts is the two-speed transmission on its rear axle.

The Taycan’s gearbox is an in-house invention, so we don’t know all its intricacies, but this Wired article does a good job of breaking things down. Basically, first gear gives the Taycan more access to torque, allowing it to accelerate even quicker; second allows the motor spin at a lower speed while maintaining speed, thus improving efficiency.

The Taycan shifts between the two gears automatically—at around 62 mph, according to Engineering Explained—but the presence of a multi-speed transmission opens up the possibility that drivers could do the shifting themselves. And while Porsche doesn’t grant that privilege to its EV drivers just yet, other brands are already open to the possibility.

Over the last year, three different companies have shown their willingness to put a stick shift in an EV. During last year’s Monterey Car Week, Gateway Bronco introduced an all-electric version of its popular restomod available with an optional, five-speed manual transmission. Then, this February, a Toyota patent came to light that outlined a system for EVs that includes a shifter and clutch (albeit a fake one). Finally, in April, Jeep unveiled its second Wrangler Magneto concept, which comes equipped with a six-speed manual for “ultimate control over the propulsion system.”

There’s only one EV you can buy today with a manual gearbox: Gateway’s Luxe-GT Ford Bronco. The latest addition to the Illinois shop’s lineup of restomods starts at $265,000 and is indistinguishable from its gas-powered models until you crack open the hood. There you’ll find a Legacy EV-sourced electric crate motor that pumps out 400 hp and 800 ft lbs of torque. As is the case with most EVs, the 4×4’s torque is available instantaneously, but if you want even more control over that output, the shop will connect the drive unit to a five-speed manual gearbox that sends power to all four wheels.

If you do opt for the manual transmission—which tacks on an additional $11,229—you’ll see two major benefits, according to Gateway founder Seth Burgett. The first is self-explanatory: the sensation of shifting through the gears yourself. You won’t get much use from the first two gears (it’s not like you need to worry about stalling), but anyone used to rowing their own will feel at home in gears three through five. The second advantage is added control, especially when off-roading, which can be tricky with an internal combustion engine, requiring real patience and control, feathering the clutch to get the power and torque just right. That’s not the case with Gateway’s EV, where twist and propulsion are available immediately, with a tap of the foot, once in the right gear setting.

“When you have an electric, it’s extraordinarily precise,” Burgett said. “You press the accelerator pedal until you have the torque and speed you need, and then you back off. You have much tighter control with an electric-powered off-road vehicle than you do a gas-powered vehicle.”

Burgett isn’t the only one who’s found this to be the case. Jeep has brought the battery-powered Wrangler Magneto to the last two installments of its annual Moab Easter Safari. The vehicle is a retrofit that started out as a gas-powered 4×4, but saw its old engine swapped out for an electric drive unit. One aspect that hasn’t been modified, though, is its six-speed manual transmission. While by no means necessary, the automaker has seen actual benefits to the feature, especially when it comes to off-roading.

“The really neat thing is the control and the finesse off-road, particularly in a really rocky situation,” Mark Allen, Jeep’s head of design, told Robb Report. “The vehicle reacts like a manual trans, where it’s direct drive. I don’t have a torque converter to get over or under. But the neat thing is you can’t stall it—and that’s always the fear when you’re driving a manual transmission in a rocky off-road situation. But it can’t stall, because it’s not running.”

Unfortunately, that doesn’t mean a manual gearbox will make it onto one of Jeep’s production EVs, the first of which is scheduled to debut next year. The automaker views the Wrangler Magneto and the upgraded 2.0 version as “an open door to the laboratory. . .a test bed” that offers Allen and his team a chance to tinker on a working vehicle, with the help of some of the brand’s most diehard supporters. The battery-powered 4×4 also shows hardcore enthusiasts they haven’t been forgotten.

These enthusiasts—some of whom may well be members of The Manual Gearbox Preservation Society—aren’t ready to give up on the stick shift. They’re like the music lovers who’ve held on to vinyl through the cassette, CD, MP3 and streaming eras because they believe it simply sounds better. There’s no reason for Gateway to include a manual transmission as an option on the Luxe-GT, except that there are drivers who truly want it. As long as this interest remains, no matter how niche it may be, someone will keep putting manual gearboxes in cars, SUVs and trucks—whether they technically need it or not.

“There are certain technologies that sort of just fade into history because there was never anything really that rewarding about them in the first place,” Macey says when describing the satisfaction of a particularly nice downshift. “Whereas other sorts of technologies or activities, there is something about them that transcends their functionality.”