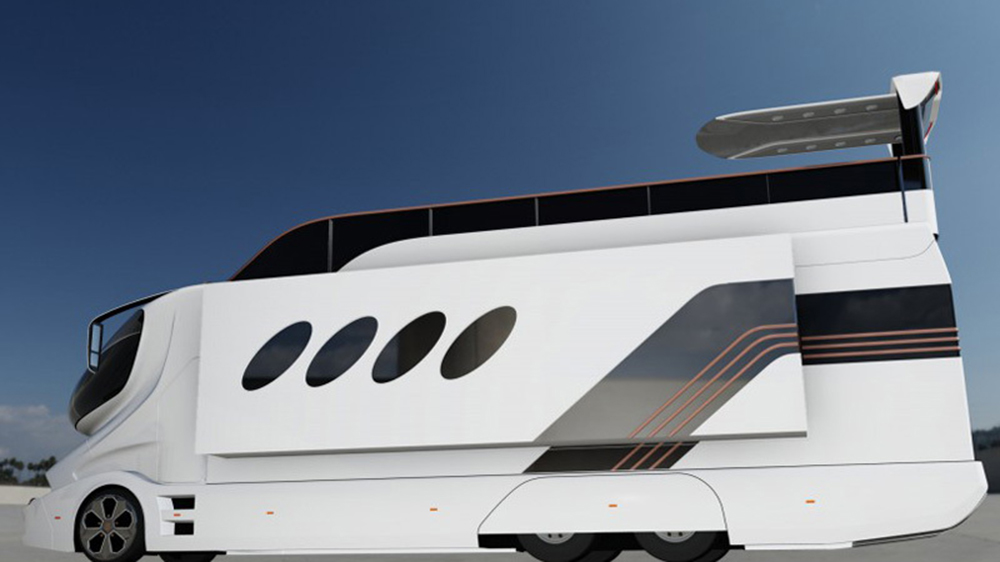 What will luxury RVs of the future look like? Turns out we don’t have to wait to find out, thanks to Marchi Mobile.

The Austrian brand’s ultra-luxe motorhome, the Elemment Palazzo Superior, looks like it teleported to earth from an underwater planet. With its  bonkers fishbowl-style cockpit, you’d forgiven for thinking it’s a submarine on wheels instead of an RV. But vehicle’s wild design is intended for extravagant road tripping and it extends from tip to tail, showcasing a laundry list of over-the-top features, including two separate stories and a pop-up rooftop nightclub.

Marchi calls the distinctive RV a “mansion mobile,” and it’s easy to see why. Its bold front end was inspired by the German designer Luigi Colani’s attempts to make semi-trucks more aerodynamic and safer during the 1970s. Fast forward 50 years and his ideas have instead been applied to this two-story mobile home. The cockpit comes equipped with a jet-like instrument panel and offers stunning side-to-side views of the road in front of you. Don’t worry about getting too much sun, either—the glass can be darkened using an adjustable sun protection system.

Even by RV standards, the Elemment Palazzo Superior is massive. The vehicle stretches 45 feet end to end and is eight feet wide, though a section of the interior can expand to 16 feet wall-to-wall. When fully expanded there is 732 square feet of interior space, or about as much as a one-bedroom condo in New York. Marchi has made good use of it, too. The standard features are all present and accounted for, like a fully stocked kitchen, an entertainment area with a 42-inch LED TV, a master bedroom with a king-sized bed made by the same company that supplied bedding for the royal family, according to the company. But there are also some extravagant features you don’t find on every RV, like a wine cabinet for the bar, adjustable sofas and a spa-style bathroom area with a glazed rainfall shower.

The cocktail lounge on the second floor comes with plush furnishings, a bar and a skylight.  Screengrab

And like any great luxury space, it offers its own outdoor space. The motorhome’s prized feature is a walled-off deck area that can be raised out of its roof via an automatic lift system. The resulting Sky Lounge has its own sky canopy, furniture, heated floors and a Steinway & Lyngdorf audio system. In other words, it’s your own rooftop nightclub.

The Palazzo Elemmental RV’s table deck expands up from the roof to create a mini mobile nightclub.  Screengrab

As you may have already guessed, the Elemment Palazzo Superior, which is powered by a brawny 600 hp Volvo six-cylinder engine, sits at the top of Marchi’s line of RVs. The company doesn’t list a price for the hulking motorhome—and didn’t respond to a request from Robb Report—but it’s been reported to carry a $3 million price tag.

Check out more photos of the Elemment Palazzo Superior below:

Inside the Elemment Palazzo Superior, a lounge area connects to the master bedroom.

It can be outfitted with a conference room if you need to conduct business.  Screengrab