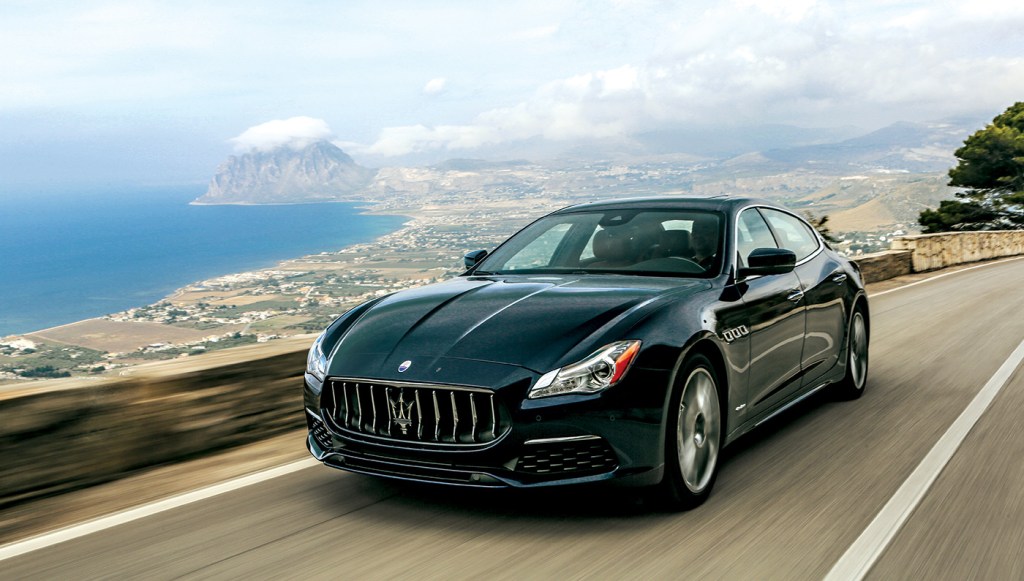 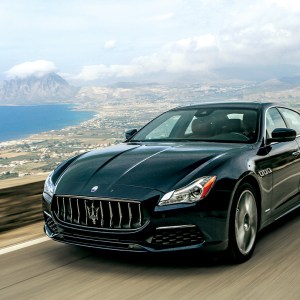 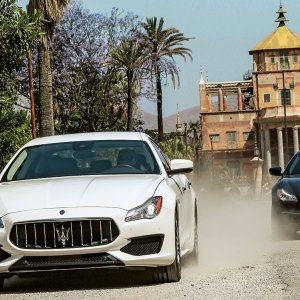 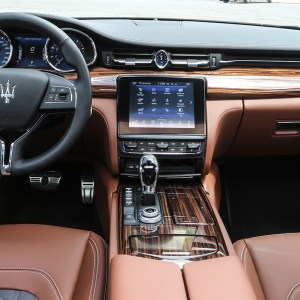 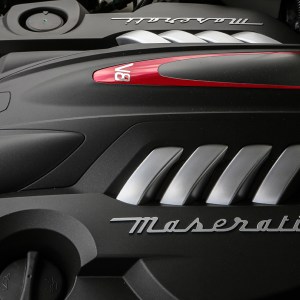 Maserati unveils the new Quattroporte while a royal example of the sedan heads for the auction block at Pebble Beach.

For the 2017 model year, the Maserati Quattroporte (maseratiusa.com) has received exterior and interior makeovers and two new trim levels: GranLusso and GranSport. Maserati redesigned the flagship sedan’s grille to better accentuate the shark-nose front end, which now includes five vertical chrome ribs that angle inward—instead of seven convex rounded ones—on either side of the trident emblem. The company has also rendered the bumpers, spoiler, side skirts, and exterior mirrors in matte black. With the GranLusso package, the bumpers and spoiler are the same color as the body panels; they are glossy black with the GranSport. Less noticeable are the addition of an active air-shutter system behind the grille and the reshaping of the front and rear bumpers. These changes help reduce drag by 10 percent, according to Maserati.

A new air-quality sensor prevents polluted air and toxic gases from entering the cabin, a system that proved effective during my test-drive in Sicily along the Targa Florio route, where it was common to encounter smoky little diesel-powered cars chugging up the hills. The Quattroporte S and four-wheel-drive S Q4 retain the 404 hp twin-turbo V-6 from last year’s models, and the top-of-the-line GTS is still powered by a 3.8-liter twin-turbocharged V-8. (Maserati had not yet announced pricing when Robb Report went to press.) Each of the versions has an 8.4-inch high-resolution touchscreen for controlling the information-and-entertainment system, which is compatible with Apple CarPlay and Android Auto.

While piloting the GTS and its host of modern conveniences along the route of the Targa Florio, I contemplated the bravery—or perhaps recklessness—required of the drivers who competed in the race, which celebrated its 100th running earlier this year. Since 1978, because of safety concerns, the Targa Florio has been run only as a rally event—but in its early years, no race was more outrageous or dangerous. Demanding of the cars, and occasionally deadly for the drivers and spectators, it was a flight from il diavolo over long coastal straightaways and up and down serpentine mountain roads. Elevation changes introduced sharp weather variations, including warm sun to snow, and the hazards included sudden sea fog, mud from farm fields, slick corners under olive trees, broken pavement, and stone walls.

Maserati chose these roads for the Quattroporte test-drive because the Targa Florio holds a prominent place in the company’s history. Ninety years ago, the Tipo 26—the first Maserati-branded car—made its racing debut at the event. Driven by Alfieri Maserati, one of the brothers who founded the company, it won the 1.5-liter class and placed ninth overall. It was an innovative design featuring an aluminum body and a small engine with 8 cylinders, dual overhead camshafts, and a supercharger.

Maserati enjoyed greater success at the Targa Florio in the following decade, claiming four consecutive overall victories from 1937 through 1940. Meanwhile, in 1939 and 1940, Wilbur Shaw was driving the Boyle Special, also known as the Maserati 8CTF, to consecutive victories in the Indianapolis 500.