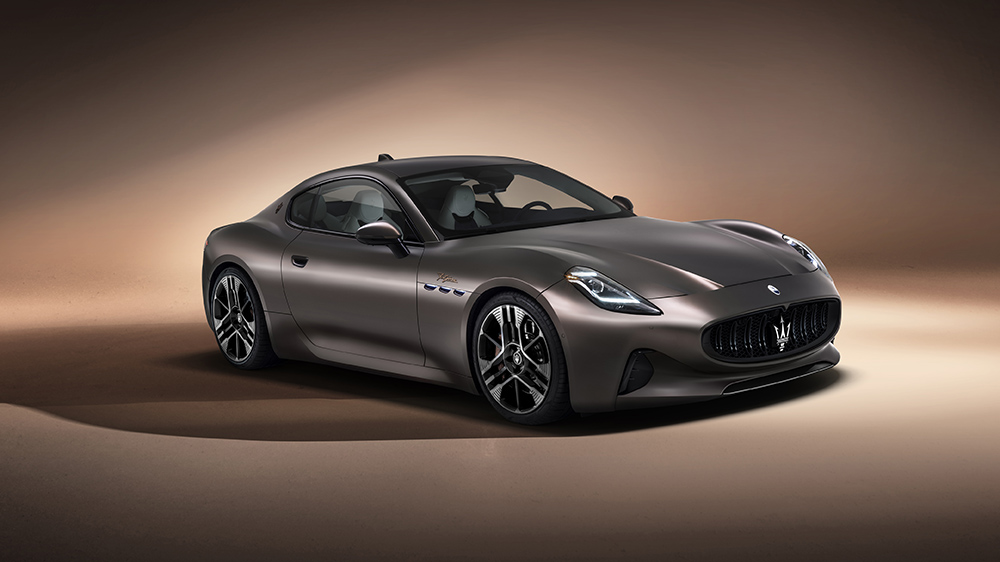 The Maserati GranTurismo is back and the results are quite literally electric.

The brand’s sporty grand tourer will return to production for the 2024 model year. But this coupe will be available with either a twin-turbo V-6 or an all-electric powertrain, the latter of which makes the car the brand’s first EV.

Any conversation about the new GranTurismo has to start with the fully electric Folgore variant. Maserati has been teasing it since production of the model went on hiatus in 2019. The latest generation of the car is built on a modular platform that can support either an internal-combustion or battery-electric powertrain. The Folgore has the latter, which consists of three electric motors—one on the front axle, two on the rear powering each wheel. The trio of motors combines to generate 750 horses (not as much as had been predicted but still a lot) and 995 ft lbs of twist, which can be sent to all four wheels or just to the rear set. Thanks to this, the car can rocket from zero-to-62 mph in 2.7 seconds and is capable of reaching a top speed of 199 mph. It’s also the most powerful car Maserati has ever made.

The three motors get their power from a T-shaped battery pack with 83.0 kWh of usable capacity. Maserati says the car will be able to travel 250 miles on a single charge based on Europe’s WLTP test cycle. The EPA’s testing process is notoriously stricter, so don’t be surprised if that number is listed 15 to 20 percent lower on the US version. Neither range is anything to write home about, but it’s important to remember that the GranTurismo was clearly designed with an emphasis on performance rather than efficiency. Luckily, its 800-volt architecture will allow for DC fast-charging, though it’s unclear how long it will take to top off the battery.

Two other variants, the Modena and Trofeo, will be available when the 2024 GranTurismo launches. Both pack the same twin-turbo Nettuno V-6 found in the marque’s excellent MC20 sports car. In the entry-level Modena, the mill produces 489 hp and 442 ft lbs of torque. In the high-performance Trofeo, it generates 550 hp and 479 ft lbs of torque. The Modena can sprint to 62 mph in 3.9 seconds and has an electronically limited top speed of 187 mph, while the Trofeo hits 62 mph in 3.5 seconds and shares a top speed with the Folgore. Both gas-powered models have an eight-speed ZF automatic transmission that sends power to all four wheels. That means all three GrandTurismo variants offer all-wheel drive (albeit with a rear-wheel bias).

Unlike the GranTurismo’s hardware, the new model’s look isn’t all that different from the past generation. The car still sits low to the ground, has a long nose and a curvaceous shape, but those elements are more refined than before. The hood and fenders now form a unified segment that the brand is calling the “Cofango.” The grand tourer is also wider and has a new lighting package, similar to that found on the MC20. The three models all look the same, though the EV version has a more sculpted lower front fascia to maximize aerodynamic performance. It’s a subtle makeover, but one that improves a car already famous for its looks.

Surprisingly, no images of the car’s 2+2 cabin were available as of press time. Maserati did say the car will come equipped with a 12.2-inch digital gauge cluster, 12.3-inch infotainment system, an additional 8.8-inch touchscreen and a 14-speaker audio system. We imagine the space will undergo a more significant reworking than the exterior.

No official release date has been set yet, but you can expect the GranTurismo to arrive sometime next year. We’ll have to get closer to the launch date to learn the pricing info, though Car and Driver reports that Modena will likely start “just under” $200,000 and that the all-electric Folgore will be the most expensive version. Whether that figure turns out to be accurate remains to be seen, but it’s fair to say the car will run significantly higher than its $135,000 predecessor.